Miloje Obradović PhD, President Of The Commission For The Protection Of Competition

We Protect The “Rules Of The Game”, Not The Players

During the previous decade, the Commission has strengthened in terms of personnel and institutional capacities, and it now sees the fight against cartels as its priority in the period ahead. The Commission has had support in its work for years from the Japan International Cooperation Agency – JICA and the Japan Fair Trade Commission – JFTC

Protecting competition is one of the fields in Serbia where great strides have been taken towards approaching EU standards, says Dr Miloje Obradovic, President of the Commission for the Protection of Competition, with whom we discussed the results of the Commission’s work during the previous decade and Japanese assisted which has helped the Commission strengthen its resources.

The Commission celebrates a decade of its existence this year. To what extent has this institution now become an essential participant in strengthening the creation of equal market conditions?

– Providing equal conditions for all participants in the Serbian market is one of the most important tasks of the Commission for the Protection of Competition. In the preceding ten years of its work, the Commission has undoubtedly strengthened in terms of human resources and institutional capacities, as well as gaining certain experience that has enabled it to also utilise the benefits of good practice, but also to more easily detect and resolve the many challenges it faces.

We can already boast of the fact that a qualitative shift has been made in terms of the importance of the processes launched and the professional way they are led at the Commission. I also consider the number of confirmed decisions as significant, because these decisions of the Commission have been aimed directly at establishing effective competition.

This is also all confirmed by the international institutions we work with, as well as the European Commission, which mentioned the significant progress in the work of the Commission for the Protection of Competition in its last report on Serbia’s progress.

What are the Commission’s biggest professional and institutional constraints?

– The Commission for the Protection of Competition works as a functionally independent state institution, which provides is with space to completely fulfil the mandate entrusted to us by the Law on the Protection of Competition. More specifically, investigating possible infringements on competition has not been limited only to market participants from the private sector, nor even those established by the state. The Commission has the possibility of sanctioning a state body in the case that its activity while acting as a market participant, has led to an infringement against the competition. In that sense, there is no limitation.

The Commission’s role is crucial not only in ensuring the establishment of the rules of competition, but also in developing and raising awareness about the need and importance of protecting competition

For a long time, the Commission had a very small number of employees. That trend has changed significantly in recent years, in terms of the engagements of a larger number of highly educated young people, who – I can say unreservedly – already have expertise in this area.

In our work, we also carefully record what requires change, in terms of institutions, and we are planning to soon propose certain changes in the legal framework.

What do you expect in this respect from the change in the legislative framework?

– I think the adoption of the new Law on the Protection of Competition is not something that should be done in haste and enacted overnight. As I have already said, we carefully record all institutional barriers that we currently recognise, but we will propose changes to the legislative framework at the moment when, in cooperation with the expert and business public, we reach the best solutions. We will not rush, because this is an extremely important issue.

Japan provides support to the work of the Commission, through projects aimed at strengthening the capacities of the Commission for the Protection of Competition. How important is this help?

– We would express our great gratitude to Japan for its support and assistance to the work of the Commission to date, through various projects. This assistance is of great importance to us, especially the programmes that are organised by the Japan Agency for International Cooperation – JICA, in conjunction with the Japan Fair Trade Commission – JFTC.

For years, thanks specifically to this cooperation, the Commission’s employees have promoted the application of competition rights and policies on the basis of the experience of Japanese colleagues. All of this valuable experience and knowledge has been implemented in applying competition protection policy in Serbia.

There is often talk in Serbia about the existence of strong cartels and oligopolies in almost all areas of business, from banking to pharmaceuticals and the media sector. To what extent can the Commission deal with these actors on the market, given their economic strength and even political backing?

– The Commission is, as I have already said, a functionally independent institution that is professionally, and in terms of personnel, capable of dealing with any kind of violation of competition on the market. 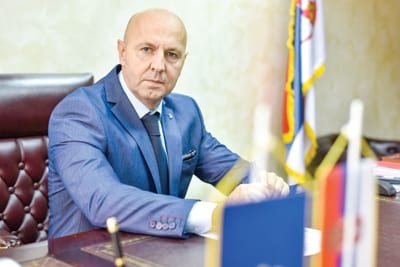 I always emphasise – our job is to protect the “rules of the game”, not the players. We do not look at who the participants in the market are and whether they are, as you say “strong” or not.

The Commission is entrusted by Law with monitoring and analysing the state of competition in various markets within the Republic of Serbia. I would remind you that we are currently leading processes on some so-called “strong markets”, such as the tobacco products market or sales in edible oils. A priority in the Commission’s work is fighting against cartels.

I expect that, by using the available legal instruments, such as the programme of leniency in sanctioning or unannounced inspections, we will have more results in detecting and punishing cartels. The Commission launches proceedings when it notices competition violations itself or when it receives an initiative about such violations.

What are the Commission’s most important activities when it comes to Serbia’s EU accession process?

– I must highlight that the protection of competition is one of the few fields in Serbia that is largely harmonised with the primary and secondary legislation of the European Union. Major strides have also been taken in terms of approaching the standards of the European Union, which was the unified conclusion after the very successful bilateral screening for Chapter 8 in Brussels.

Of course, there’s more work to be done. That’s why, starting with the assessment and recommendations provided in the European Commission’s report on Serbia’s progress, but also from our own observations and experiences, we are also considering the improvement of certain legal solutions.

How well do businesspeople in Serbia understand the significance of the Commission and the protection of competition, and how often do they address you with complaints?

– If we were to judge on the basis of the number of initiatives regarding competition infringements, as well as the questions we receive from market participants, we could say that the role of the Commission is increasingly recognised and appreciated, but still not enough.

The situation has certainly changed significantly over the course of the past ten years of the work of the Commission, particularly in the past year, when we increased activities to advocate the policy of protection of competition not only among market participants but also with state institutions, experts and the general public.

The Commission’s role is crucial not only in ensuring the establishment of the rules of competition but also in developing and raising awareness about the need and importance of protecting competition.