Without Naled’s Vision We Would Not Have E-Permits

In my ministry, I always give an opportunity to young and educated people working in jobs for which they are overqualified to demonstrate their potential on large-scale projects. Our ministry also gives out “The Person of the Year” award with the view of publicly commending people who are very good in their job

“It’s been nine months since the system of electronic issuance of building permits has been implemented. I can confidently say that it is functioning well and that building permits are now issued within a week on average. I also have no problem with admitting that without NALED’s vision and support, we wouldn’t have been able to do such an important thing for our country.”

What swayed you towards agreeing to NALED’s initiative to include electronic issuance of building permits in the Law on Spatial Planning and Construction from 2016? Why did you choose NALED?

For me, NALED is an unusual group of people who got together to try to do something tangible and good for our country, something from which our citizens would benefit. Why did I use the word “unusual”? Because, unfortunately, there aren’t many people who would want to do something concrete for their own country, town, street or family. On the other hand, there are a lot of people who only talk and criticize without ever offering a solution. That’s why I chose NALED. 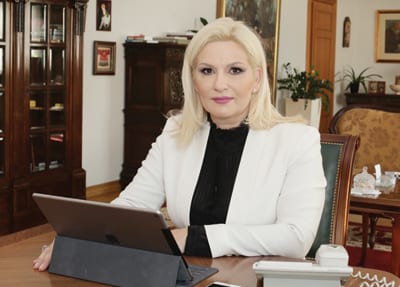 Because I saw in them similarities with the way I implement policies.

Before I came to this ministry and before the amendments to the law were made, the waiting period for a building permit was three or even four years, and I don’t even want to talk about corruption.

That’s why, together with NALED and with the help of the German and Swiss governments and USAID, we carried out an analysis of a similar system in Macedonia, a country that ranks 10th in the world considering the time needed to issue a building permit. We wanted to have such a system here too and I am happy that we now do.

What does the reform of the building permit system mean to you in terms of boosting Serbia’s competitiveness and how did the staff adapt to the new work regime?

A long waiting period for building permits was, for years, one of the main reasons why the business environment in Serbia got such negative remarks. On the basis of this criterion alone, the World Bank placed us at the number 178 out of 196 countries on it’s 2014 “Doing Business” list.

Another record was broken in July this year when we issued a total of 1,301 building permits, which is 2% more than the previous record from the month before. The value of the planned construction works in the first seven months of 2016 is 35% higher relative to the same period last year

Thanks to the reform of the building permit issuance system, Serbia jumped from the 91st to 59th place on the “Doing Business” list in one year alone. I expect further progress to be made this year too. Our administration has demonstrated that it can and wants to learn, that it can change and can use new technology. In June 2016, we issued 48% more permits than in June 2015.

You have been also cooperating with NALED in the Joint Task Force for Improving Serbia’s Ranking on the World Bank’s “Doing Business” list, which has accomplished notable results. What new input could the civil sector and businesses provide in implementing reforms

Prime Minister Aleksandar Vučić formed a special task force that I manage and whose duty is only to work towards improving Serbia’s ranking on the “Doing Business” list. 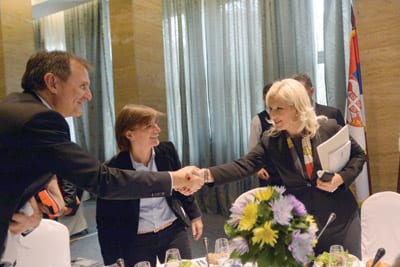 NALED is also a member of this task force. We have defined clear indicators, stipulating how procedures should be implemented in practice and how all of that affects business perception.

Today, we have a well-defined programme with clear guidelines, something that every ministry or institution should have in order to contribute to a better environment for doing business. We have regular consultations with businesses and have been holding workshops where we analyse the current situation in the segments covered by the “Doing Business” list. This helps us quickly spot and solve practical problems.

As a president of the Coordination Body for Gender Equality, I wanted this issue to be included in the local budgets because women should not be considered the untapped potential in society. A gender-responsible budget is now mandatory and 28 budget institutions already have a gender equality component.

If, for instance, a town allocates most of its subsidies to cattle breeding, the end users of these funds will be mostly men because men are usually engaged in that segment. But if part of the money goes towards vegetable growing, where women are dominant, then we create an environment where everybody has the same access to resources

Our plan is for all local self-governments to apply this. Gender-responsible budgeting does not imply having one budget for women and one for men, but it means every local self-government should analyse the way in which funds are spent and then adjust the budget so that it meets the needs of both women and men.

The Reformer of the Year Award is one of the very few awards that you are proud to talk about as a recipient. Why is this award important to you, and how important is it for local officials and civil servants to be publicly acknowledged and valued, aside from ministers?

The Reformer of the Year Award, which I received from NALED, is recognition for the entire team who worked on reforming the building permit system. This award also speaks about the importance of building permits for the overall business environment, economic growth and increasing the construction industry’s share in the GDP.

Ministers are very much in the public eye, but it is the civil servants who do the job, and that’s why it is important to have a system in the administration that recognizes skilful and diligent individuals.