We have shown that we are ready to tackle the most challenging issues such as the reform of public enterprises, building roads and improving railway services. Cooperation with the private sector allows us to test our decisions in practice

We spoke with Zorana Mihajlović PhD, Deputy Prime Minister and Minister for Construction, Transport and Infrastructure about the Government’s and the ministry’s current reform tasks.

Will the new government be strong enough to carry out the most challenging part of the reforms, the part that will not be completed before the arrangement with the IMF has expired, primarily the restructuring of public enterprises?

How much progress has been made in this regard in your sector?

– If I were to list everything we’ve done, I’m afraid it wouldn’t fit in your magazine. But I will mention the most important work.

We have started a comprehensive reform of the Serbian railways ‒ an unthinkable task for previous governments. 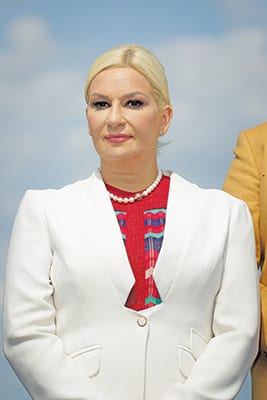 We have unbundled Serbian Railways into a holding company with three subsidiaries: Railway Infrastructure, responsible for rail track maintenance, and Serbia Cargo and Serbia Train, responsible for goods and passenger transport respectively. Contributions from the state budget have been reduced dramatically. The decades of debts on electricity bills have been resolved, the railway market has been opened for the first time, and we now have a private operator.

According to the IMF, Serbia can be an example for other countries in terms of speed and quality of railway reform.

We are investing a great deal in connecting Serbia with the region and Europe. We are finishing Corridor 10 towards Bulgaria and Macedonia, we are heavily involved in the construction of the Corridor 11 motorway to Montenegro with Chinese companies, we are finishing work on the Žeželj Bridge in Novi Sad, the new bridge over the Drina near Bratunac, the Ypsilon arm of Corridor 10 near Subotica, and we have yet to start the modernisation of the Belgrade-Budapest railway, which will be running trains at 200 km/h.

But I have to mention something unrelated to infrastructure that I am very proud of. The Coordination Body for Gender Equality, which I chair, is about to adopt a draft law on gender equality, after more than two years of work. This is an extremely important law that affects every citizen, and it should guarantee greater gender equality than we have now.

How prepared is the railway sector for significant changes primarily in terms of track modernisation and the introduction of competition in freight transport?

– The railways are ready in terms of staff, organisation and operation, and we will provide funds for modernising the tracks. We are working in cooperation with the Russian Railways and have obtained funds from “the Russian loan”. More importantly, everything is done to European standards because, as a future EU member state, Serbia is part of the European transport network. So far we have rebuilt 127 km of track, work on 85 km is underway and work on an additional 155 km should start by the end of the year.

The reliability and safety of trains have been improved, and their speed increased to an average 100-120 km/h on the renovated tracks.

There is one thing I’m very proud of that has nothing to do with infrastructure. After over two years of hard work we are about to adopt a draft of the Law on Gender Equality

What can we realistically expect in 2017 and 2018 in terms of large infrastructure projects?

– Definitely the completion of the most important road in Serbia, Corridor 10, in both directions, towards Macedonia and towards Bulgaria. There is still a section to be done through Grdelička Klisura and Sićevačka Klisura canyons, and we will soon open another 30 km of motorway from Pirot to Dimitrovgrad. Corridor 10 is important both to Europe and to us as this year it will have carried 13 million vehicles more than three years ago.

The Obrenovac to Ljig section of the motorway to Montenegro is nearing completion. With the Ljig to Preljine and Čačak section already open, we will have over 100 km of the motorway through Šumadija. The ring road around Belgrade connecting Corridors 10 and 11 should also be finished soon. In cooperation with the EU, we will find the best mode of financing and start building the “motorway of peace” from Niš to Merdar to Priština, connecting more than 100,000 people in Toplički District. After many years of conflict, this will be the first project where Serbs and Albanians will be working side by side.

This year, in cooperation with our Chinese partners, we are starting modernisation of the Belgrade-Budapest rail track, the track to the border with Hungary. We also want to start work on the Belgrade-Sarajevo motorway.

Why is the Government so hesitant to find the right concessionaire for Nikola Tesla Airport?

– There is neither hurry nor hesitation when it comes to finding the best concessionaire. Our airport is one of the fastest-growing in the region – I expect it to serve a record 5.5 million passengers in 2017. Substantial funds are required for it to develop its potential further, which will be the concessionaire’s obligation. I believe that the airport will have found a new concessionaire and the state new revenues from the concession by the end of the year.

– The US Ambassador Kyle Scott told me that our building permit system is better than the USA’s, which really means something. The Ambassador’s kind words aside; it’s a fact that Serbia has advanced on the Doing Business List by 150 positions thanks to its electronic building permits. Nowadays, a building permit can be obtained in five working days on average, and in some Serbian municipalities even faster. In the first quarter of 2017, the number of electronic permits issued went up by 120 per cent compared with last year.

Progress has been made in land conversion, but there have been some issues concerning restitution. What is the ministry doing to resolve these issues?

– During the drafting stage of the law, strict care was taken not to lessen the rights of former owners. 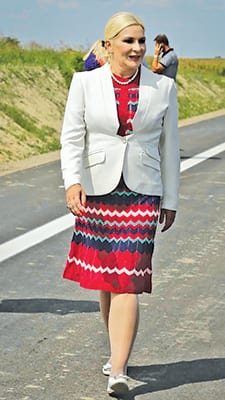 Article 1 of the Law on the Conversion of the Right of Use into Proprietary Right on Building Land for a Fee prescribes that the rights guaranteed under that law do not limit the rights guaranteed under the Law on the Restitution of Property to Churches and Religious Communities. The law also prescribes that upon receiving a restitution claim, the authorities must obtain a certificate from the Restitution Agency proving that the land in question is not under restitution. If it is, they have to stop conversion until the restitution of the confiscated property has been completed.

However, problems have occurred as a large number of cases started to emerge where only financial compensation was possible, rather than restitution, and the conversion couldn’t be completed until compensation was paid. To allow the conversion to continue, the ministry and the Restitution Agency agreed that it would be enough to submit the Agency’s decision on the right to compensation even though the compensation had not been paid. This and other outstanding issues will be covered in the guidelines that are currently being drafted.

One of the ministry’s major tasks is cadastral reform. How are you satisfied with progress since there are many unresolved cases?

– Cadastral reform is an absolute priority and is crucial for Serbia’s further progress on the World Bank’s Doing Business List. We have prepared a draft law on cadastre which will shorten the registration time to three to five days, and introduce electronic registration of property as of 2020. The draft law is now out for public consultation. Our goal is for cadastral reform to be as successful as the building permit reform has been.

FIC and the Government have common goals: to attract as many foreign companies to Serbia as possible, for all of them to work as smoothly and effectively as possible to generate maximum profit, and for the state to use the tax revenue to create a modern country

What other areas could help Serbia improve its ranking on the Doing Business List?

– In addition to cadastral reform, we will initiate the abolishment of business stamps and move to full electronic business administration. We will provide better protection for small shareholders through greater transparency of information on securities transactions. We will also provide transparent and accessible information on the managing bodies of joint-stock companies. Additional reliefs in electronic tax payment have been agreed and the rulebooks issued by the Ministry of Finance have been amended.

– Business associations gather together companies and the companies feel the effects of the reforms first-hand, on a day-to-day basis. This is why it’s very important for us to get feedback.

What do you expect from this new model of cooperation between the Government and the Foreign Investors Council?

– The Foreign Investors Council and the Serbian Government have common goals: to attract as many foreign companies to Serbia as possible, for them to work as smoothly and effectively and generate as much profit as possible, and for the state to use tax revenue to create a modern and successful country. I have every reason to believe that the Serbian Government will accept all the Council’s recommendations aimed at these goals.

In your opinion, how has the Foreign Investors Council contributed to this dialogue over the past 15 years?

– There is no doubt that the Foreign Investors Council contributed a lot to establish a dialogue between the business and the government in the first place. Later on, its recommendations were organised in the White Book, helping improve the business environment. I hope that the dialogue and cooperation continue, and our joint working group is a guarantee that they will.