People in both Slovenia and Serbia are...
Read more

NTS is a company that has spent...
Read more

As Serbia is adjusting to the regulatory requirements of the European market with determination, and EU accession is becoming a reality, Slovenia makes an ideal economic partner, given historical facts, the closeness of the market and knowledge of the language

Slovenia is expected to see robust growth in 2018 and 2019, driven mainly by private consumption; rising investments and strong external and domestic demand.

What makes Zdravko Počivalšek, Slovenian Minister of Economic Development and Technology, even more satisfied is the fact that the financial crisis made the Slovenian economy more robust and resilient.

How has the economy changed over the course of the financial crisis?

The key problems faced by Slovenia’s economy following the outbreak of the financial crisis were a decline in competitiveness, low productivity in relation to the EU average and high labour costs. We also faced an increase in structural unemployment, while the quality of corporate management was falling and there was a huge discrepancy between employers’ needs and the available labour supply. The Slovenian economy was highly indebted and banks had credit crunches.

The Slovenian economy today matches the pre-crisis results with one important difference – our companies are healthy, independent and have better corporate management.

Which economic sectors are poised to post the best results?

According to IMAD (Spring 2018 economic forecast) growth is expected to continue in manufacturing and construction. Regarding manufacturing sectors, which account for an almost 75% share of exports, growth is highest in motor vehicle and trailer production, electrical equipment and other machinery and appliances, as well as in rubber production. Most market services will also continue to grow, while foreign demand will also influence growth in transport, accommodation, food services and in some administrative and support services, as well as in tourism and ICT services.

According to government estimates, what would be the optimal structure in terms of production vs. services for the Slovenian economy, given the current trends of automation and digitisation?

The share of manufacturing in Slovenia’s economy is already above the EU average and above the EU goal for 2020, which is 20% (2016 – EU: 16.1%, SI: 20.1%). The share of business services, on the other hand, is lower in Slovenia (2016 – SI: 8.6%, EU: 9.9%). Globally, as well as in Slovenia, manufacturing is already strongly linked to services and, as such, we should not use the term “production vs. services”. Future trends in the form of digitisation and automation will most probably further erase the divide between manufacturing and services.

How many Slovenian products or services can be described as belonging to Industry 4.0.?

The Slovenian ICT sector comprises just under 7,700 enterprises that are engaged in the production of information and communication technologies or the provision of ICT services. According to data of the Statistical Office of the Republic of Slovenia, enterprises in the ICT sector generated turnover of around €3,684 million in 2016, which is 2% more than in 2015. The majority of the value added was generated by enterprises in the domains of computer programming, consultancy and related activities.

In September 2017, the Slovenian Digital Coalition, a coordinating and consultative open forum that brings together stakeholders in the field of digitisation, was strengthened with the support of the “Blockchain Think Tank” that now includes over 500 stakeholders. A total of five per cent of all global investments were invested in Slovenian Blockchain projects.

According to Forbes, Slovenia’s Jožef Stefan Institute is among the world’s leaders in Artificial Intelligence and Big Data Analytics, in both knowledge and e-services. Slovenia has the world’s largest number of AI & Robotics researchers per capita – with approximately one researcher per 7,000 inhabitants. There are nine companies operating in the field of robotics in Slovenia, one of which is industrial robots manufacturer Yaskawa.

Slovenia, in 2018, remains above the EU average in terms of enterprises’ integration of digital technologies. Slovenian SMEs are increasingly taking advantage of the possibilities offered by online commerce: 17.7% of them sell online and 11.6% sell cross-border. The Slovenian Government intends to promote the use of web-based services among SMEs by organising roadshows on the Internet of Things in regional centres and at fairs, and through the rollout of broadband and 5G.

According to all estimates, the labour market is tightening. What impact could this have on the price of labour and the level of employment, as well on the competitiveness of the economy?

The fact is that Slovenian companies are no longer finding a sufficient number of suitable candidates. The price of labour grows in inverse proportion to this, which of course affects the competitiveness of our economy. The Slovenian Government is responding to this by issuing calls for new education programmes suited to the economy and larger employers. 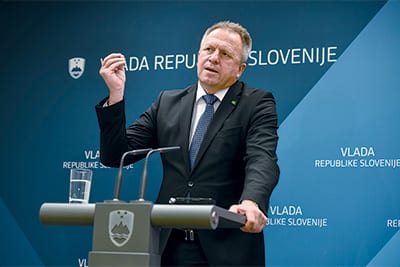 A specific example of this is, for instance, the Machine Technician programme in Kočevje that was established following the arrival of Yaskawa in Slovenia. Kočevje can also look forward to a mechatronic technician programme under the same impetus.

The heart of every business is of course people, and we cannot afford not to have the people that our companies need, so I am absolutely against each and every administrative hindrance to the employment of foreigners in Slovenia, since we urgently need them – at least until we educate sufficient numbers of our own workers in line with market needs. And on the subject of the workforce, I would like to say that another important challenge awaits us when it comes to rechanneling the economic growth we are witnessing so that the state takes a smaller piece of the pie.

In which areas are you facing the greatest shortages in the workforce and what are you doing to fill the gap?

The greatest demand is for basic labour in manufacturing and construction, and for waiters, cleaners, service staff and domestic helpers. Employers are also seeking sales staff, heavy goods vehicle and tractor unit drivers, carpenters, chefs, warehouse staff and procurement and sales officers. We are addressing the lack of specific personnel by issuing work permits, through grants for deficit occupations, training programmes and other active employment policy programmes.

How have Slovenian companies reacted to the favourable changes in the economy? Where are they seeking to make new investments?

The current economic situation is good (5.1% economic growth in 2018) as is the growth forecast for the coming years. With increasing demand and improved competitiveness, economic activity is accelerating. 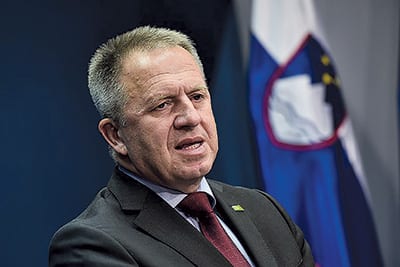 The survey among companies with foreign or mixed capital already established in Slovenia (carried out by the SPIRIT SLOVENIA agency and the International Relations Centre at the Ljubljana Faculty of Social Sciences in December 2017) indicates a continuation of favourable trends in 2018. Foreign investors are optimistic with regard to their growth outlook for their Slovenia-based companies, which have recorded above-average expansion over the past five years. Almost 40 per cent of companies with foreign capital in Slovenia that disclosed their investment plans are planning to expand in Slovenia in 2018 (the most since 2013) and 70 per cent expect sales to grow this year.

The fact is that Slovenian companies know the Serbian market extremely well, and consequently business is growing on both sides. In recent years this has also come from the other side, with investment and co-investment by Serbian companies in the Slovenian market. Of course, the economic progress of a year or two ago has slowed down a little, which in view of the situation is entirely understandable, predictable and acceptable. Of all our economic partners outside the EU zone, Serbia has held second place on that list in the past three years, both in exports and imports, as is seen in the consistent and high-quality nature of our cooperation.

Our cooperation with Serbia holds particularly good promise in the areas of information technology, ecology, agriculture and tourism

I should underline the fact that goods trade between our two countries is greater than that which Serbia has, for instance, with the major powers like China, the U.S. and Russia. After a record year in 2016, that trade grew again last year, reaching €1.35 billion. There has also been a change in the make-up of the market, especially in the form of increasingly active smaller companies, including start-ups, for whom the country represents an opportunity to expand, both in terms of their product ranges and in spreading through a much bigger market. Given the fact that Serbia is the second biggest recipient of Slovenian investment, it should be added that we can also expect an increase in the other direction, and not just in the areas of tourism, banking and IT.

How do you assess the role of the Slovenian Business Club in the process of internationalising Slovenian businesses interests in Serbia?

The Slovenian Business Club, which this May celebrates 15 years of operations, is an organisation without which it would be hard to imagine the successful operations of companies from our country on the Serbian market. The professionalism of the small collective team, along with it being fully up to date, are the key attributes that truly enable the fulfilment of interests, preparation and entry into Serbia in the shortest possible time. Good knowledge of the rules of business operation in the Serbian marketplace, good relations with practically all institutions, ministries and top government figures are an argument that can spur internationalisation and also provide rewards.

According to your data, how many Serbian investments have been made in Slovenia over the recent period?

Serbia is Slovenia’s most important trade partner in the region of Southeast Europe and trade flows are increasing, as are investments. According to data from the Bank of Slovenia, Serbian foreign direct investments in Slovenia have been increasing over time. For example. they leapt from €54.6 million in 2013 to €81.4 million in 2015 and €87 million in 2016. On the other hand, Serbia was the second largest recipient of Slovenia outward FDI at the end of 2016, with its total stock of €1,014.9 million accounting for 17.8% of total outward FDI. Firms engaed in the following activities made the largest investments in Serbia: manufacturing (33.9%), wholesale and retail trade and repair of motor vehicles and motorcycles (33.1%), financial and insurance activities (15.7%) and professional, scientific and technical activities (10.0%).

How can the two countries place their economic cooperation at a new level in terms of quality?

Innovation and new business models are drivers of future growth, enabling a technological edge. Companies in Slovenia cooperate within the Strategy of Smart Specialisation in strategic development and innovation partnerships. Key stakeholders of the most prospective sectors are linked within these partnerships, so they have better chances to climb higher in the global value chains together.