The development of 5G networks and modern...
Read more

Balkan countries, and especially Serbia, continue to be markets of great opportunities and positive business prospects for Greek businesses. Although the region already hosts many Greek companies, improving infrastructure connectivity between countries and reducing delays for trade will also contribute to faster development and reform progress at many levels

For the last 15 years, the Hellenic Business Association (HBA) in Serbia has represented an important address for all Greek investors seeking new opportunities for investment cooperation between Greece and Serbia. Apart from traditional sectors in which Greek companies are already operating in Serbia, there are new avenues for cooperation in various fields, such as energy and renewable energy, agriculture, real estate and tourism development and information technology and telecommunications, says Zafeirios Lampadaridis, Chairman of the HBA Management Board.

How would you assess business opportunities in Serbia for existing and prospective Greek investors?

– Greece traditionally represents an important economic and business partner of Serbia, as the two countries have always enjoyed excellent bilateral relations, reflected through important Greek investments in Serbia over the past 15 years. Many Greek companies have recognised Serbia’s investment potential and decided to locate and relocate operations in Serbia. For some of them, Serbia serves as a manufacturing hub that enables duty-free exports to a market of almost a billion people. Others are attracted by the great level of the highly skilled and easily trained workforce, an environment of good incentives and the business-friendly tax system. But it should be said that, despite the great interest in Greek investments in Serbia, the two countries have not yet explored opportunities and complementarities in many sectors.

To that end, many B2B meetings are organised to provide the possibility to discuss potential new products, technologies and services, business and research cooperation, technology transfer agreements, identifying buyers and suppliers, and even more. One quite optimistic fact is that the expected growth of the Greek economy in the coming years will lead to even greater interest in the Serbian market among Greek companies. Furthermore, the recent establishment of the High-Level Economic Cooperation Council between the two countries will definitely contribute to enhancing bilateral economic cooperation.

To what extent has the Western Balkans changed in its quest to develop and reform?

– From a business perspective, the countries of the Western Balkans have made major progress over recent years in terms of reducing trade barriers, both within the context of their regional free trade agreement and their aspirations to eventual EU membership, and thus further advances in this area would be beneficial to all sides.

More specifically, from a Greek business perspective, the Western Balkans could attract the attention of a larger number of industrial manufacturing groups that would benefit from the low cost of labour, even lower taxes on opening factories and, of course, the proximity to the Western Balkan market, if there was a more effective and enforceable plan to improve business standards. Even though the region already hosts many Greek companies, improving infrastructure connectivity between countries and the reducing of delays to trade will also contribute to faster development and reform progress at many levels.

How many of your members are companies that operate in Serbia today and how many of them operate in the region? What prospects do they see?

– According to the recent presentation held in Thessaloniki by the commercial attaches of Greek embassies in the region, Balkan countries, and especially Serbia, continue to be markets of great opportunities and positive business prospects for Greek businesses. As already pointed out, there is still a need to resolve issues that hinder entrepreneurship in the region, but there are also a number of factors that make the region attractive to HBA member companies. Steady growth, the continuous creation of employment opportunities and relatively low inflation help reduce poverty, meaning that the 18 million inhabitants of the region are becoming increasingly important as potential customers, as improvements to the level of residents’ living conditions increase requirements for quality and branded products.

Despite great interest in Greek investments in Serbia, opportunities are yet to be explored in sectors like agriculture, food and beverages, building and construction materials, energy, information and communication technologies

Although there is still plenty of room to develop bilateral economic cooperation not only in the form of trade flows, but also through ventures/investments in Serbia and the Balkan region, our business practise has so far proven that any foreign business deciding to establish operations or conduct investments in Serbia encounter a reliable and dynamic country that affords them a much greater opportunity than they initially perceived. With this in mind, most HBA member companies are active in more than one Balkan country.

From the perspective of your member companies, which sectors in Serbia might be the most attractive for Greek investors?

– Since the staging of the Greek-Serbian Business Forum in Thessaloniki in March 2018, the Hellenic Business Association of Serbia – as a non-government organisation that has been devoted to “monitoring” market developments and the business sector in Serbia – insisted in particular on organising activities mainly with the Embassy of Greece in Belgrade, the ultimate goal of which is to connect businesspeople and seek new opportunities for investment cooperation. In the last year, the sectors in which our members and other Greek entrepreneurs have shown an interest in Serbia are energy and renewable energy, agriculture, real estate/tourism development and information technology and telecommunications.

After five years of the “The Greek Initiative to Work Experience”, which experiences would you like to share with the business community? 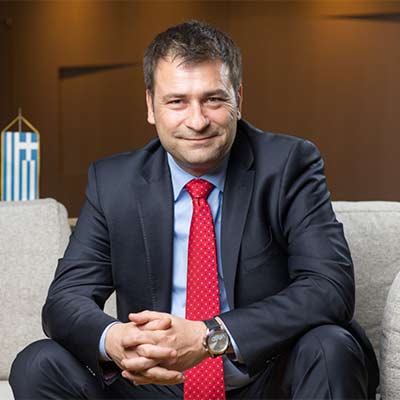 – The engagements of Greek businesses in Serbia, and the multiannual programme “The Greek Initiative to Work Experience”, show that adaptability is a new competitive advantage. When leading businesses seem to be falling behind in sectors where they were once dominant players, there is a clear recognition that the status quo cannot be maintained and this is certainly something that Greek businesses know very well.

Besides, if this were not the case, Greek companies would not have managed to maintain their stable and recognisable presence on the Serbian market during the crisis. With this in mind, existing Greek businesses have been forced to push their businesses to their competitive limits and have developed an ability to respond to changes while never losing sight of their original vision.

Which recent HBA activities stand out in terms of their contribution to society?

– In several of the recent events organised by our Association, we have pointed out the status and role of the Greek School in Belgrade, which is a school that teaches the Greek language to preschool and school-age children. The Greek School in Belgrade is a self-financing organisation that holds various events of a Greek character. Since the Hellenic Business Association of Serbia welcomes any initiative to promote Greek culture and tradition, for this purpose, the Management Board launched an initiative to support the work of this school.

According to that initiative, the Association provided an alternative space for conducting lessons and realised a purchase of one part of essential equipment. The School now operates in a new location and has larger spaces, while the number of students has reached 70! Moreover, I am pleased to confirm that the HBA, in coordination with the Embassy of Greece in Belgrade and other Greek entrepreneurs in the country, has undertaken to contribute in 2019 to the renovation of the Monastery of Saint Archangel Gabriel in Zemun, where liturgies are performed in the Greek language. You see that, as representatives of our state in Serbia, besides the business sector that is our priority, we welcome every effort to promote Greek culture and tradition.

What do member companies expect from the Association? Which of your services are in high demand?

The Hellenic Business Association of Serbia targets bringing the Greek market and the market of Serbia closer and to give Greek companies the chance to operate in a safe investment environment. In addition, it is a strong body that promotes its members in front of key stakeholders, such as the Serbian government, media and other foreign business associations and chambers active on the market. In this respect, our members principally expect that, while doing business in Serbia, they will receive full support in communication with Serbian and Greek institutions and the possible protection of their interests. In achieving its main tasks, the Hellenic Business Association of Serbia has succeeded in presenting its members as a strong representative profile with an outstanding impact in Serbia, and additionally promoting Greek business practises as very successful, for which we are very proud.

Considering that you operate in the hospitality sector, how would you assess Serbia’s potential for tourism?

– Tourism represents one of the real chances for significant development that Serbia possesses. However, the country is not exploiting its cultural points, historical resources and tourism potential, mostly due to poor infrastructure and a lack of cooperation between relevant local institutions. It is known that the development of tourism in Serbia has been neglected for decades and that the quality and diverse resource base of Serbia is not utilised sufficiently, as the offer of Serbian tourism products, spontaneously developed for the needs of domestic tourism, is not able to respond to the contemporary trends of the international tourist market.

In order for Serbia to take its place in the international tourist market, it must increase the competitiveness and attractiveness of tourism products significantly, based on the principles of sustainable development – as current analyses indicate that the future volume of tourist demand will be reflected through the use of modern information technologies, communications and transport, by redirecting demand to destinations with original natural values and a high degree of ecological stability, a marked increase of interest in ecological values, restoring nature and expanding the knowledge horizon.

It is also estimated that travel for health and preventative care will be dominant in the 21st century, so the country could reach great demand as a result of its numerous medical spa centres.