Obtaining a certificate for the production of...
Read more

The Provincial Secretariat of AP Vojvodina this year continued allocating significant subsidies for its farmers. These funds are intended for livestock farmers, fruit growers and young farmers, as well as for organic production, cold storage facilities and wineries, while bee-keeping is also in focus – given the significant increase in honey exports.

According to Provincial Secretary for Agriculture Vuk Radojević, increasing the irrigating of areas is continuing, through the second phase of works on projects from the Abu Dhabi Fund, but also investments in anti-hail protection.

You’ve announced that AP Vojvodina will have, operationally, the most effective and efficient agricultural budget this year. Explain to us what that relates to, how the budget is conceived and what the novelties are?

– Vojvodina’s agrarian pot for 2019 totals 6.38 billion dinars, and that amount is lower compared to the previous year when the agrarian budget totalled 7.03 billion dinars. We have a nominally smaller agrarian budget for this year, but it is more effective operationally because by working responsibly we’ve managed to realise all the commitments taken on from the budget in 2017 and 2018, so we started 2019 with a 96% more operational agrarian budget. When it comes to the Agricultural Land Programme, planned funding amounts to 1.52 billion dinars, while another 1.25 billion dinars has been allocated for direct support to farmsteads.

The agrarian policy of the competent secretariat is directed towards supporting intensive branches of agriculture. Incentive support of the competent secretariat is realised through the Agricultural Land Programme, within the scope of which we are continuing all measures from the previous year. A new funding contest line in this programme relates to improving the work of voluntary firefighting companies, for which 40 million dinars have been allocated. For the Programme to develop agriculture and villages, we have earmarked funds totalling 668 million dinars. We are continuing – within the framework of this programme – to support the equipping of livestock farms, polytunnels/greenhouses, cold storage facilities, wineries, perennial plantations, bee-keeping and more. A new measure in this programme is subsidising the equipping of microbreweries, for which we have allocated 20 million dinars.

The Secretariat invested significant financial resources in supporting the development of bee-keeping in the previous period, which other sectors of agricultural production will be in focus in 2019?

– Bee-keeping is experiencing expansion and needs further improvements, as Serbia generates significant foreign currency gains through exports of bee products. Some 2,538,139 kg of honey was exported in 2017, worth a total of 9,776,312 dollars. Through subsidies for procurements for bee-keeping societies and new equipment, we’ve invested 91,907,595 dinars with applicants in the development of bee-keeping in Vojvodina over the last two years. Apart from bee-keepers, vegetable growers, cattle breeders, fruit growers, winegrowers and winemakers, hop farmers, organic food producers, dairy and meat processors, and craft beer producers can also count on the support our secretariat.

Implementation of the first stage of the irrigation project began last year. How is implementation progressing and what are further plans like?

– Works began in August 2017 on 11 irrigation projects in Vojvodina that are being financed by the Abu Dhabi Fund. Works have been completed on eight projects, while the remaining three – CS Jegrička CP Pesir and the Kikinda regional subsystem – are in the final phases. The first stage of works is worth 1.5 billion dinars and its implementation will enable the irrigating of around 37,000 ha of land. The first stage was supplemented with the addition of the project launched this March to construct the Mali Iđoš regional subsystem – works on which are worth up to 3,621,021 euros. Works on the second stage of the irrigation project from the Abu Dhabi Fund are envisaged to begin during the course of this year, with new 12 projects of a total investment value of 21,497,578 euros.

The Provincial Secretariat for Agriculture, in cooperation with the National Hydro-meteorological Institute, is working to improve the system for defending against hail in Vojvodina. Could tell us the amounts that have been allocated for this purpose this year? 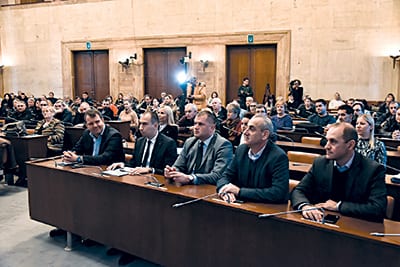 – As a reminder, the competent secretariat allocated, through incentive support in 2017, funds amounting to up to 20 million dinars for procurement of anti-hail rockets, which we co-financed by up to 60 per cent, in cooperation with local self-governments. With the aim of more effectively protecting agricultural crops against hailstones in Vojvodina, in 2018 we altered that agrarian measure, began tendering for the public procurement of anti-hail rockets, which we then make available to the National Hydro-meteorological Insitute of Serbia, which has jurisdiction over anti-hail protection and which distributes them further, on the basis of the needs of the radar centres of Fruška Gora, Bajša and Samoš. Anti-hail protection begins on 15th April and, with respect for deadlines, the secretariat had by 2nd April already handed over 780 anti-hail rockets to the National Hydro-meteorological Insitute of Serbia for use at the radar centre on Fruška Gora. We have earmarked 30 million dinars for anti-hail protection in 2019.

Has the Action Plan for Organic Agriculture Development in Vojvodina been prepared; what are its objectives and planned effects? How much money has so far been allocated for this kind of production?

– The Action Plan for the development of organic production in Vojvodina is currently in the phase of specifying the project tasks of individual participants. The authors of the plan will be people with rich experience in this field from the Faculty of Agriculture in Novi Sad, the Open University, the Terra’s Association from Subotica and the Belgrade-based National Alliance for Local Economic Development, NALED.

The aim of the Action Plan is to improve cooperation and partnerships of the civil sector, educational and other institutions with the holders of authority at the provincial level, while creating conditions for the development of organic production and raising the quality of life of the population and preservation of the environment, which impacts indirectly on the economic development of the Province.

– In 2017, together with the Ministry of Agriculture, Forestry and Water Management, the Provincial Secretariat for Agriculture published the first-ever Funding Contest for the support of youngsters, for which we allocated funds amounting to up to 100 million dinars. And, given that there was great interest in this measure among farmers, we increased funding to 200 million dinars in 2018. I can state with satisfaction that in two years we had the effect of creating 252 new farms owned by young farmers aged from 18 to 40. I expect to achieve even better results through this agrarian measure this year, and I will tell you that we’ve earmarked up to 250 million dinars for supporting young farmers.