Our Cooperation Is Constantly Improving

Political relations between Serbia and Slovenia are harmonious, while the rapid growth of the Slovenian economy and the healthy advancement of the Serbian economy have contributed to the “good vibrations” being transferred to increasing goods exchanges and investment

Bilateral relations between Slovenia and Serbia are improving constantly, and the results of such good cooperation are visible on both the political and economic fronts. This growth in cooperation has been helped in particular by the robust growth of the Slovenian economy and the recovery of the Serbian economy, which came as a result of fiscal consolidation and reform. Along with the continuation of Slovenian investments in Serbia, there are ever more investments by Serbian entrepreneurs in Slovenia, primarily in elite tourism and banking. “We particularly welcome Serbian investments in Slovenia,” says H.E. Vladimir Gasparič, Slovenian Ambassador to Serbia.

In recent times, notes our interlocutor, progress has also been achieved on issues of the succession of the former shared country and other issues on which our two countries cooperate. During the migrant crisis, the two countries further deepened collaboration in the field of illegal migration and terrorism, as well as in fighting all forms of organised crime. Special focus in this cooperation is also placed on Serbia’s European integration process, where a large number of Slovenian experts provide professional assistance to their Serbian counterparts.

“Our experts advocate for Serbia to implement reforms as soon as possible and advance everything that is required,” says Ambassador Gasparič. This Slovenian diplomat emphasises in particular the importance of progress on chapters 23 and 24, which are considered as being crucial to the European integration process. “Based on the specific problems experienced in Serbia by people and companies from Slovenia, we consider that such progress would certainly be welcome,” considers our interviewee, with whom we discuss numerous elements of Serbian-Slovenian relations.

In the increasingly complex relations within the region, it could be said that the relationship between Serbia and Slovenia is the only one that has resisted the temptation to constantly re-examine the past. In your opinion, to what do we owe this fortunate set of circumstances?

We agree with what you say about the relationship between our two countries, and there are probably multiple reasons for such a situation, such as for example that the fact that Slovenes and Serbs have had good relations throughout history. I would recall that during World War II the Serbs acted very humanely towards those expelled from Slovenia, that we have excellent economic cooperation today, that we employ 25,000 people in Serbia and are very supportive of the process of accession negotiations with the EU, while perhaps another reason is that we are not direct neighbours [laughs!].

What do you see as today’s key security challenges that our two countries need to cooperate on the most?

Our two countries cooperate closely on issues of illegal migration and terrorism, which we could single out as a key security challenge. I would also add to this fight against all forms of organised crime, where our organs cooperate successfully.

Serbia and Montenegro are definitely the leaders in the negotiating process, and the speed and extent to which you accept what is required of you is primarily in your hands

Two years ago, at the start of your term in Serbia, you set the priorities of your work as the strengthening of economic cooperation, faster resolving of the outstanding issues of Yugoslav succession, Slovenian assistance to Serbia on EU membership negotiations and the strengthening of cooperation in the domain of culture. From today’s perspective, how would you rate progress in these areas?

I am happy to be able to confirm that, through hard work with our colleagues from Serbia, we have taken new steps in all the areas mentioned, especially in the economy, the EU negotiation process and issues of succession. The only area where I feel that we could do more is in the field of culture, because the potential there is undoubtedly enormous.

Which factors today determine the potential to accelerate Serbia’s European integration, and what kind of assistance from Slovenia can Belgrade rely on in this process?

The media scene has been filled of late with recommendations on what Serbia should do to accelerate its EU accession. As far as Slovenia is concerned, we don’t only talk about that, but also actively assist. Our experts advocate for Serbia to implement reforms as soon as possible and advance everything that is required. In terms of the number of experts, Slovenia is the third country engaged in these activities in Serbia.

From the perspective of an EU member, how do you view the possibilities of accession of, for example, Serbia and Montenegro, which are considered relative leaders of the wave of accession coming from the Western Balkans? Are the key decisions in the hands of the countries that aspire to membership, or does a lot depend on the views of existing members regarding the future organisation of the EU? 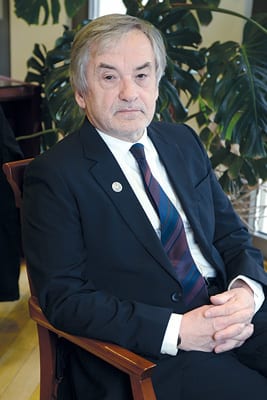 Serbia and Montenegro are definitely the leaders in the negotiating process, and the speed and extent to which you accept what is required of you is primarily in your hands.

On the other hand, within the framework of the EU family there are many dilemmas and disagreements that have a negative impact on the bloc’s readiness to expand and receive new members, but I would nonetheless say that it is primarily about your commitment to substantive reform, where I would like to particularly emphasise chapters 23 and 24, where we are all actively monitoring progress.

Based on the specific problems experienced in Serbia by people and companies from Slovenia, we consider that such progress would certainly be welcome.

To what extent is the improvement of Slovenia’s economic situation and the moderate growth of Serbia’s economy reflected in trade exchange trends?

The rapid growth of the Slovenian economy and the healthy advancement of the Serbian economy represent good foundations for increasing the exchange of goods and investment. We particularly welcome the interest in investing in Slovenia among Serbian investors.

Serbian investors are buying banks, hotels and airports in Slovenia like never before. Has this trend surprised you?

The increased interest in Slovenia among Serbian investors is a welcome addition to investors from other countries, primarily EU member states. At present, Serbia’s interest is predominantly in the field of high-class tourism, the quality of which is improving the competitiveness of Slovenian tourism. I would like to use this opportunity to note that Serbian tourists are the main and most welcome guests of our spa centres.

Slovenian investors are interested in purchasing and investing in spas in Serbia. This process is currently being held back by unresolved ownership structure issues related to spa buildings and land

We are today witnessing the two-way street that tourism has become between our two countries, with many Serbian tourists visiting Slovenia and vice versa. However, we have yet to see greater cooperation between the two countries on upgrading the capacities of Serbian spa centres. In your opinion, why has the potential to transfer Slovenian knowhow in this area not yet been utilised?

To the best of our knowledge, interest exists in Slovenia to invest in the development of spas in Serbia – not only in terms of the transfer of knowhow, but also with regard to investments and purchases. As far as we understand it, the biggest problem is occurrences of unresolved ownership structure issues related to spa buildings and land. On the other hand, we note that there are tourism resorts in Serbia that have very high standards comparable to the best in Europe, so Serbia certainly has potential and a future in this area.

The City of Maribor has offered support to the City of Novi Sad in its candidacy to become the European Capital of Culture for 2021 and the European Youth Capital for 2019. Based on Slovenia’s experience, how important are these kinds of projects to the nurturing of the European idea?

Based on the experience of Maribor, I am certain that such projects provide extraordinary stimulus for the development of the culture, mentality and infrastructure of the mentioned cities. The experiences of Slovenia and Maribor are definitely very positive, and I believe Novi Sad will also succeed in that.

Business Growing on Both Sides

Economic cooperation between Slovenia and Serbia gets better each year, both in terms of exports and imports, but also in terms of investments. This...
Read more

Danijela Fišakov, President of the Slovenian Business Club in Serbia

Last year's trade exchange between Slovenia and Serbia exceeded 1.5 billion euros, while this exchange has more than doubled over the past ten years....
Read more

The CEKIBEO team aspires to bridge the gap between civil engineering branch – such as hydraulic and structural engineering, transportation and hydraulics, roads-highwaybridges and...
Read more

Dejan Turk, CEO of Vip Mobile and A1 Slovenia

Changes are the Only Constant

Vip mobile, which is part of the international A1 Telekom Austria Group, the leading telecommunications provider in the CEE region, holds a leadership position...
Read more

Activities of the Slovenian Business Club

The Slovenian Business Club in Serbia forms a stable, unbreakable bridge between the economies of Serbia and Slovenia that has been fulfilling its mission...
Read more

Awakening the Economy of Ajdovščina

Ajdovščina is situated in western Slovenia, alongside the border with Italy, and represents the economic, educational and cultural hub of the Vipava Valley. Ajdovščina...
Read more

Tiny Slovenia is a veritable treasure trove of attractions and activities – from Venetian coastal towns to white-water rafting – that would rival a...
Read more

The Embassy of the Republic of Slovenia marked the 28th anniversary of the Statehood Day with a reception in Belgrade's Metropol Hotel. Ambassador of the...
Read more
Cord MagazineLeaders Meeting Point