Vladimir Bumbaširević, MD, PhD, Rector of the University of Belgrade

Information Technology And Other Challenges

Technological development, especially in the field of information technology, has imposed new challenges on education policy in our country, as well as the need for an institutional framework that would enable us to cope with those challenges

Despite the difficulties we’ve faced over the last almost three decades, thanks to the maintaining of the quality of higher education – and even its improvement in the last decade, which is reflected in the respectable position of the University of Belgrade (UB) on prominent ranking lists – Serbia has managed to keep pace with modern global trends to an extent.Vladimir Bumbaširević

The Ministry of Education, Science and Technological Development recognised the need for an appropriate institutional framework that would enable a higher quality education policy, adopted a Strategy that places an emphasis on the creation of a highly educated workforce and implemented appropriate legislative changes which, unfortunately, are not optimal in all segments.

However, without greater financial investment in all levels of education and in scientific research, even the best institutional framework and education policy cannot ensure inclusion in European and global trends.

The Law on Higher Education prompted a barrage of comments from the academic community, students and other experts. What would you highlight in the context of contemporary educational trends as challenges related to the spirit and application of this law?

– The spirit of this law, unfortunately, is largely contrary to the spirit of university education that has been nurtured in Serbia since the emergence of our oldest and most prestigious Belgrade University: the autonomy of the university as a prerequisite for the harmonious fusion of teaching and scientific research. Despite numerous complaints from the National Council for Higher Education and the academic community, certain legal solutions have been adopted that considerably limit this autonomy.

The academic community is rightly expected to monitor modern educational and scientific trends, but in that, it should not be disturbed by the excessive influence of external factors. The legislative framework that hinders the autonomy of the university makes it more difficult to successfully create and implement educational policies, and thus to keep pace with global trends in education.

In your opinion, will the application of the law and the general treatment of the academic community have an impact on changes in the ranking of universities?

– I don’t expect such an impact in the short term, but I’m afraid that poor legal solutions and insufficient budget funding will already be reflected in a decline in the quality of teaching and scientific research in just a few years, which will inevitably threaten the position on prominent world ranking lists.

Along with the introduction of dual education, the debate on the harmonisation of the education framework with the needs of the market is very current in the context of higher education. How much does the academic sphere need markets and practise, and how can the right balance be made? 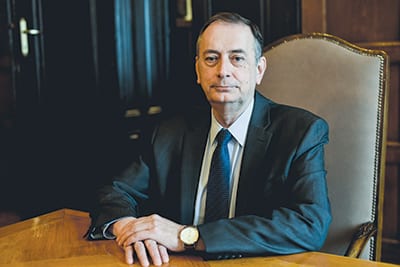 – Creating an educational policy should take into account the needs of the market, just as it is also important that teaching includes, besides theoretical elements, the opportunity for as many practical elements as possible, because it is only in that way at all levels of education that high-quality personnel can be formed, capable of successfully engaging in work processes and practically apply their acquired knowledge and skills.

Cooperation with companies has existed for years (via contracts with the Chamber of Commerce, NIS and EPS) and needs to be nurtured and developed. An important role in that is played by the UB Career Development Centre. Educational systems tend to be inert, so their best possible harmonisation with the needs of times requires the continuous monitoring of market parameters, which provides the basis to form the most reliable long-term projections.

Innovations are simultaneously encouraged via numerous programmes, especially innovations that can also gain value on the market. In that way, we gained the option to support faculties in more easily marketing the products of their scientific-research projects on the market, in cooperation with the Innovation Fund and through the Technology Transfer Programme. Can these initiatives connect science and the economy in a qualitative way?

– Both the state and universities are aware of the importance of connecting education, science and the economy. Since its inception in 2011, the Innovation Fund has played an important role in this respect. In cooperation with the World Bank, it successfully completed the Innovation Support Project in 2016, which was funded through EU pre-accession funds totalling €8.4 million, and last year saw the launch of the Project for Support to Research, Innovation and Technology, the financing of which includes, in addition to the EU, the Government of the Republic of Serbia and the domestic private sector.

The aim is to improve cooperation between the scientific research sector and the economy through the commercialisation of the results of scientific research and technology transfers. As in the previous project, this one also includes some faculties and institutes, while the University of Belgrade’s Centre for Technology Transfer is also included. Such initiatives and projects are certainly invaluable to the high-quality linking of science and business.

Despite numerous complaints from the National Council for Higher Education and the academic community, certain legal solutions have been adopted that considerably limit the autonomy of the University of Belgrade

The law also envisages the introduction of short study programmes and studies that enable the acquiring of practical know-how and skills in accordance with the needs of the labour market. Something like that already exists through higher vocational schools and in the form of vocational studies. How do they differ?

– Short study programmes are intended to equip students to perform a specific job in an appropriate workplace. They are significantly shorter than vocational studies and are intended, in accordance with our Law on Higher Education, for people who’ve already acquired higher education diplomas.

One of the possibilities for financing the activities of the University of Belgrade is to rely on the revenues of many endowments/ foundations, but in that, you are not helped by either the law or the government. How important are foundations for financing universities that can be considered our equivalent?

In the mid-1990s, the legal framework was created to restore the work of 11 of 35 university endowments and, thanks to the understanding of the city municipalities of Stari Grad and Vračar, which enabled UB to use properties belonging to endowments on their territory, the university now generates revenue from seven endowments that is used for granting scholarships and financial assistance to students, rewarding the best scientific works and to finance UB’s general needs.

The current Restitution Law represents a legal obstacle to the restitution of endowment property, but we are still hopeful that the competent authorities, who have to date responded with silence to all of our appeals, will understand the significance of this issue and find a solution that would benefit not only the academic community but also society as a whole. Although they have a long tradition, endowments have almost completely disappeared in our region, while in many other developed countries they play an important role in improving the material position of universities. For example, renowned investor Bill Miller recently donated $75 million just to the Department of Philosophy at Johns Hopkins University (the U.S.’s first research university), with the aim of encouraging research and assisting students!

Many universities in Eastern Europe make money by enticing foreign students to enrol in their programmes. This process is barely evident in our country, despite the University of Belgrade being ranked favourably in relation to most Eastern European universities. Why don’t we take advantage of this kind of opportunity?

– A relatively high position on ranking lists, regardless of how much it is an indicator of quality, is not sufficient to attract foreign students. It is essential to work more on conceiving and accrediting the highest quality study programmes taught in English.

Over the past few years, 47 such programmes have been accredited, but efforts should be exerted to achieve better results in this area. Alongside programmes, it is necessary to increase accommodation capacities in dormitories for foreign students, as well as easing the acquiring of residence permits or student visas.