After only five months in Serbia, H.E. Syed Adil Gilani, Gilani has nothing but respect for the Serbian people and praise for their core values. There is a lot to be done concerning the development of economic and cultural cooperation between the two countries, but, most importantly, mutual respect exists between the two peoples

Pakistan is a country in South Asia, at the crossroads of West Asia, Central Asia and East Asia. The world’s sixth most populous country, with 201 million inhabitants, the Pakistan federation comprises four provinces and four territories, with a total of about 130 districts. It has a semi agricultural and semi-industrialised economy, while the population speaks more than sixty languages.

Your Excellency, you arrived in Serbia only recently. What are your initial impressions?

I came here five months ago and think your country is really fantastic. Serbia is already part of Europe. You represent an excellent mix of different characteristics, and have all the advantages of a European country, but also an Eastern country, though you also have something that makes you unique.

Serbia is very beautiful; the people are very beautiful and I believe Serbia is one of the most beautiful countries in the world. The most important thing I have noticed is the behaviour of Serbs, as they are very well educated, extremely humble and respectful, energetic and, above all, very responsible.

What have you defined as the priorities of your term in Serbia?

My mission in Serbia will be to bring our two nations closer together than ever before and to increase bilateral trade relations, which are currently very small. To achieve this, both nations will have to exert a lot of effort and to establish a Serbian Embassy in Pakistan, which existed until 1992.

Next year will be dedicated to the Pakistan-Serbia friendship. We have already discussed this with Serbian President Vučić and Foreign Minister Dačić. 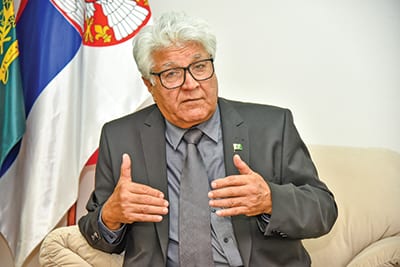 The following year will mark a great celebration in such a way as to show the whole world how close our two nations are, and that Serbia was among the first countries to recognise Pakistan when it gained independence.

Next year we will celebrate this jubilee by organising various exhibitions and events, with the aim of demonstrating that we are a very friendly people and that it is our wish to further develop cooperation in the fields of science, culture and tourism.

On the foreign policy front, the issue of Kosovo’s membership in UNESCO, which Serbia opposes, is again current. Will Pakistan again support Kosovo’s UNESCO membership, as it did in the last vote?

This is an issue that Serbia has been dealing with for some time now, and I hope that Serbia will solve the Kosovo issue as soon as possible. It is of vital importance that Serbia joins the EU, and I definitely hope, or actually, I am sure, that this issue can be resolved in a peaceful manner for both the people of Kosovo and the people of Serbia. Concerning this question, I am not yet sure how we will vote regarding Kosovo’s membership in UNESCO, but what I can say for certain is that policies are definitely changing over time.

In which areas do you see possibilities for the further development of cooperation between Pakistan and Serbia?

I believe that our cooperation can develop in many different areas. However, I think Serbia will predominantly export various products to Pakistan, for instance, arms, IT components, hardware and software, electronics, while Serbia will mostly import from Pakistan garments, surgical equipment and medical supplies. It is important to emphasise that tourism also has very good potential for both our countries. Pakistan has a good climate, seashore and mountains, but Serbia also has much to offer.

The most important thing I have noticed is the behaviour of Serbs, as they are very well educated, extremely humble and respectful, energetic and, above all, very responsible

When it comes to Pakistan, the 70th anniversary of the country’s independence was marked this August. What do you consider as being your country’s greatest challenges?

That is definitely economic development, which was disrupted by terrorist attacks. Pakistan has suffered the greatest loss of human life as a result of terrorism. Furthermore, we have also sustained great financial losses.

We have spent hundreds of millions of dollars trying to solve that problem, and it will continue to be one of our most important challenges in the future. In addition, we have very important infrastructural projects underway, such as the construction of roads, bridges, power plants, airports etc., in cooperation with China, which will surely provide a much-needed boost to our economy.

How important for Pakistan is the fact that celebrations were also attended by the vice president of China, while the military parade included members of the armed forces of Turkey and Saudi Arabia?

It is my opinion that this was a very good gesture by the president of Serbia, especially because it was the first time that officials at such a high level attended the mentioned event.

President Vučić is very fond of Pakistan, and he also sent a special message of friendship. I think that the celebration will be very successful in bringing our two nations together. The festivity presented the tradition and cultural characteristics of Pakistan, and owing to the media attention, even from the national networks of other countries that followed this event, I hope the right image of Pakistan was relayed to the people of Serbia.

Considering your country’s geopolitical position, how would you comment on the conflicts in the Middle East, on one side, and the latest rising of tensions in relations around North Korea, on the other?

I have to say that I believe most of those issues to be artificial, and at present, I hope there will be no conflicts like the last world war. Those conflicts happened because certain countries wanted to occupy the territory of other countries, but now there is no need for that. At present, issues lead to financial warfare, and financial wars can only be won by those countries that perform better financially.

A series of terrorist attacks caused dozens of deaths in Pakistan in just the last few months. Not far from Pakistan’s border, in the Tora Bora cave complex region, a battle is being fought between the so-called Islamic State and the Taliban, which consider the area their own kind of hub. How grounded are the recent estimates of your interior minister, who said that “the authorities have broken the back of the terrorists”?

For the past three years, we have prepared a plan to defeat terrorism in Pakistan. The terrorists were hiding between inner Pakistan and the western border, but we were able to apprehend all of the terrorists at that location. However, this area still needs to be secured with the help of international forces, especially the U.S., but also other countries, because the so-called Islamic State will use any opportunity available and terrorism will continue to exist.

As far as Pakistan is concerned, we have strengthened our forces in that part of the border area, and this was the greatest battle against the terrorists in the past twenty years. Over seven or eight thousand soldiers gave their lives in this war against terrorist groups in that part of the country. That’s why the statement of our interior minister, who said that “the authorities have broken the back of the terrorists”, is indeed correct, and represents Pakistan’s greatest success in the fight against terrorism.

I am not yet sure how we will vote regarding Kosovo’s membership in UNESCO, but what I can say for certain is that policies are definitely changing over time

The start of the year saw the publishing of the Government of Pakistan’s intention to build a 2,400-km-long wall along the border with Afghanistan, in order to defend against terrorism. How much progress has been made in those plans and how would you describe the situation in that neighbouring country?

I think that more than 40 per cent of the work is already finished, but it is not a wall, rather it is a barrier, to be specific, preventing anyone from crossing from one border to another. The barrier should be completed by the end of next year.

The world’s media reported in June that Pakistan had become the first country in history to sentence a man to death for comment on social networks, or for allegedly insulting the prophet Muhammad on Facebook. The decision of the Pakistani Court of Counterterrorism is considered by many as an attack on freedom of speech. How do you view this decision? 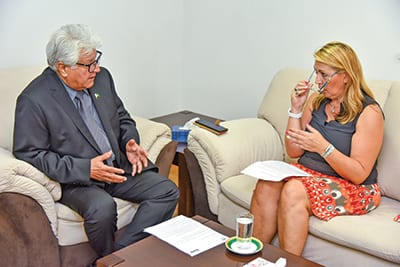 Regarding this Facebook issue, their team was called and they came and removed all the insulting material that was directed against Islam and against the Islamic prophet Muhammad. This had a very positive impact on social media networks because religion is an issue of the individual.

Social media networks, such as Facebook, Viber or WhatsApp, are now learning that this is a burden and they are blocking all insulting content against Islam, and they should do the same for all religions because religion is and should remain a personal matter.

The wave of migrants that arrived in Europe last year, also travelling through Serbia, included a number of Pakistani citizens. Are you monitoring their fate, given the decision of the destination countries that they must return to Pakistan?

This is a European Union issue. Migrants go everywhere, and this is not only an issue today. Many nations are composed of migrants, such as the U.S., Canada and Australia. Immigration is a process that has been going on for centuries, and it cannot be stopped.

However, now the process of migration has brought up other problems, issues of religion and colour, which is bad.

In Serbia, for example, there are no immigrants from China, Africa and the Indian subcontinent, because of the personal differences and because you do not accommodate them.