We want to establish a public administration that is more efficient in relation to costs, which will better serve citizens and the economy for less money and which will function according to transparent and harmonised procedures. That’s not easy, but there is no alternative!

Our interlocutor believes that public administration reform is not an enter and exit process, but rather has many phases. “What is visible is that the situation in the administration has changed significantly compared to the previous period. There is a noticeable change in the awareness of employees in the administration, who are now aware that they are here for citizens and the economy, and that they represent a public service for citizens,” says Minister Pribilović.

She also emphasises that the public administration represents “the state of the state” – the most direct meeting of citizens and the economy, with the utilisation of their money collected through taxes. “For this reason, all the activities we have implemented and plan to implement are directed towards the realisation of this goal,” says our interlocutor. 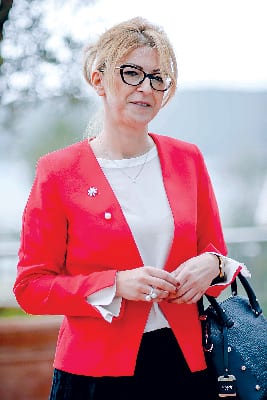 Despite noted progress, the focus of the EU’s new support programme for Montenegro is precisely on this subject. What are the priorities of the Government and the Ministry you head in the period ahead?

We want to establish a public administration that is more efficient in relation to costs, which will better serve citizens and the economy for less money and which will function according to transparent and harmonised procedures. We agree that this isn’t easy, but there is no alternative! Therefore, in the previous period we devoted ourselves to establishing the institutional and political coordination of the public administration reform process.

In the first year of work we prepared two key systemic laws on local self-government and civil servants & state employees, and during this year we are focusing on launching the application of these legal solutions, primarily the Law on Civil Servants and State Employees, as of 1st July. At the same time, the implementation of the Law on Administrative Procedure also started last year, which is very important when it comes to providing administrative services, while this year we will be monitoring the implementation of this law and its practical application.

We are working in continuity on increasing the number of electronic services. One of the most important activities this year is the creation of the Plan for the Optimisation of Public Sector Employees, while there are also activities for establishing the One-Stop-Stop system, in order to make services more accessible to citizens and businesses. In the field of reorganising the state administration, we are working on new legal solutions and preparing the new Law on State Administration.

In which areas does the EU provide the greatest support to the Ministry in reorganising the state administration and creating a new legal framework that would enable professionalisation and greater efficiency of work?

You prepared two key systemic laws during the previous year, one on local self-government and civil servants, and one on state employees. When do you expect the first effects of the application of these two laws to be evident?

– We expect the first effects of the Law on Civil Servants to be evident already from the launch of its application. The new law brings more efficient and simplified procedures, reduced costs and generally amended solutions that will be evident through the direct application of the law. 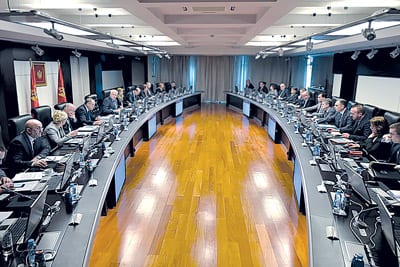 Moreover, the new Law on Local Self-Government retains the current concept of local self-government regarding simplicity and equal competencies, while new solutions are in the function of improving the principles that form the basis of the local self-government system: professionalism, responsibility, openness and operational efficiency.

According to the Law on Local Self- Government, the municipalities provide conditions for the development of entrepreneurship and thus play a significant role in promoting local socio-economic development.

The new law also recognises the importance of the role of managers, who – in accordance with the given competencies – propose and participate in the preparation and implementation of municipal development plans and programmes that stimulate economic development, entrepreneurial initiatives and public-private partnerships, preparing and managing projects financed by international funds and other sources, which has created favourable conditions for attracting domestic and foreign investments.

What will the application of these laws mean to foreign and domestic investors at both the national and local levels?

– It is certain that these systemic laws are crucial for the work of the public administration, regulating the systemic work and functioning of local self-governments, while strengthening principles of professionalism, efficiency and economy. Over the longer term, these two laws should contribute to the administration being in the service of citizens and the economy.

Which tasks can citizens and companies today carry out via e-counters; how popular are these services?

– The E-government portal currently integrates 273 e-services for both citizens and companies, while several services stand out in terms of usability: the programme for the professional training of high graduate students and requirements for student loans. Via the E-health portal, citizens can schedule an appointment with their chosen doctor, access laboratory testing results and much more. They can also require identification documents electronically.

Which E-government services do you recognise as being the most important for improving the transparency and efficiency of the Montenegrin business environment?

– The latest project, which concludes at the end of June, seeks to improve the Montenegrin business environment by creating an electronic register of business licenses on the E-government portal. It will integrate information related to the performance of business activities of over 300 licenses issued by public administration. On the other hand, for several years important services have included tax declarations, information on business registration etc.

When will the first ’One-Stop- Shop’ centre be established?

– The Government of Montenegro is dedicated to establishing a One-Stop- Shop centre in Montenegro. We plan to establish it in Podgorica in 2020, and the Ministry of Public Administration has already started working on action plans and the preconditions for this project.

The E-government portal currently integrates 273 e-services for both citizens and companies, while several services stand out in terms of usability: the programme for the professional training of high graduate students and requirements for student loans

In technical, professional and financial terms, how challenging is it to set up a modern E-government system? Do you have enough professional personnel to do this job?

– The development of such a complex concept as E-government requires people with a high level of expertise from technical, organisational and normative fields. It also requires strong coordination of all public administration bodies, both in terms of understanding the common goal and realising operational tasks. Financial support for these processes is a particular challenge, due both to the speed of ICT development and the frequent lack of understanding of ICT as an investment and not an operational cost.

You have created space for e-Participation and e- Petitions on the E-government portal. To what extent do citizens and companies take advantage of these opportunities to express their views?

– Although the public administration of Montenegro offers citizens the opportunity to participate and interact with public institutions the E-government portal, this option is unfortunately not utilised to the greatest possible extent. This year, within the framework of the Public Administration Reform Strategy, we planned activities to improve the functionality of e-Participation and e-Petition, in their technical and functional segments. We will also focus our attention on promoting and improving the visibility of these important aspects of e-Democracy, in order engage citizens in decision-making processes even more.