Both countries agreed to cooperate closely in various multilateral fora

Given that you arrived in Serbia only recently, what do you see as today’s priorities of the bilateral cooperation that was established 70 years ago?

Whilst I only took over as Indian Ambassador in Belgrade a few months back, I did have some prior knowledge of the country and the region, as I served as Director General dealing with Central Europe at the Ministry of External Affairs in New Delhi immediately before coming here. I am, thus, familiar with the historical background of our bilateral ties, as well as the current developments. In the early days following India’s gaining independence, the leaders of the two countries played pioneering roles in the Non-Aligned Movement, which was the need of the hour, particularly for developing countries.

Despite the geopolitical shift, India and Serbia still share common views on many global issues. Our bilateral ties are robust. Closer economic cooperation is also being greatly emphasised by the leaders of both sides. We certainly need greater trade and investment, and closer people to- people contact.

Indian Vice President Naidu visited Serbia recently. How would you assess the effects of his discussions with Serbian officials? 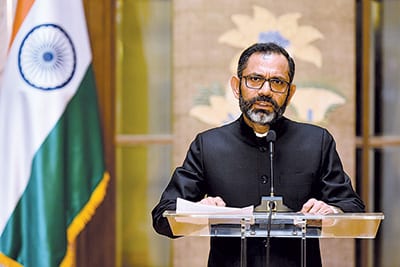 During the visit of Vice President Naidu, the leaders of both countries acknowledged the need to continue regular exchanges at different levels. Both countries also agreed to cooperate closely in various multilateral fora. It is widely accepted that the United Nations is in particular need of urgent reforms and that a more representative, legitimate and effective UN Security Council reflecting current geopolitical realities is now needed more than ever to better address today’s global conflicts and crises. Both Serbia and India recognise terrorism as a serious global threat. To tackle this menace, India proposed back in 1996 a draft ‘Comprehensive Convention on International Terrorism’, for codifying well-accepted norms of global cooperation on counter-terrorism in a formal instrument of international law. Both leaders felt the need for further progress on this.

In another significant development during the visit, national postal services Serbia Post and India Post jointly released postage stamps featuring Nikola Tesla (a great Serb innovator and inventor) and Swami Vivekananda (a great Indian spiritual leader). These two visionaries were known to each other and Tesla was deeply impressed by the thoughts of Swami Vivekananda.

Has implementation of the two Agreements signed during the aforementioned visit started – related to cooperation in the field of protection of plant-life and in air traffic? What specifically will these agreements ease when it comes to cooperation between the two countries?

Moreover, the global civil aviation industry has gone through major changes in the past fifteen years. The new Air Services Agreement incorporates the changes required in modern times and will provide better air connectivity between the two countries in due course. This will be particularly useful as India offers its online e-Visa to Serbian citizens and Serbia has abolished visa requirements for short visits by Indians.

Vice President Naidu and Serbian President Vučić participated in the Indian-Serbian Business Forum. Is there any interest in strengthening economic cooperation?

In discussions held during the visit, the leaders of both countries acknowledged that the current level of trade and investment is far below the true potential. Annual bilateral trade totals around US$200 million. Considering that India is a major importing nation with annual global trade figures of US$769 billion, Serbian exporters can develop an India-specific strategy to capture a greater share of the Indian market. India is also a major foreign investor. In the past three years, Indian companies have invested US$40 billion abroad. 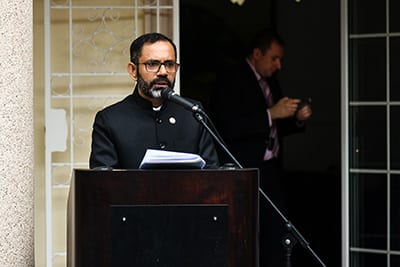 The total financial commitment in that period is US$120 billion. In the case of Serbia, Indian companies have already invested in sectors like tractor manufacturing, an IT Park, food processing, the manufacturing of aluminium panels, waste disposal containers, railway equipment etc. Considering that Serbia is a member of the EU Customs Union and has FTAs with Russia and many other countries, there is great potential to attract further investment from India. In the IT sector, India has the capabilities and Serbia can gain from this expertise. Tourism promotion, attracting Indian tourists to Serbia and vice versa, can be another new area for closer economic cooperation.

Indian company TAFE became the owner of Serbia’s IMT factory in 2018. Have you had the opportunity to acquaint yourself with the plans of the Indian owners of this once very successful company?

Agriculture plays a major role in the Serbian economy. This provides a great opportunity to supply Serbia with high-quality tractors at affordable prices. Indian company TAFE, which had a long association with Serbia, correctly sensed the need and acquired this leading Serbian tractor brand and its factory to manufacture TAFE tractors in Serbia under the IMT brand name. The company’s business plan is progressing well. In fact, two other leading tractor companies from India – Mahindra and Sonalika – also have their own assembly lines in Serbia with Serbian partners. There is also great scope for similar cooperation for other agricultural machinery.

You are aware that the dialogue between Belgrade and Priština is in crisis. India has not recognised the unilaterally declared independence of Kosovo. Do you believe that – alongside the European Union – the United Nations should also be more actively involved in resolving this issue?

On the Kosovo issue, India always maintains its principled stance and supports the sovereignty and territorial integrity of Serbia. India recognises the legitimacy of the role of the United Nations, as well as UN Security Council Resolutions on this issue. India supports the peaceful resolution of this issue through discussion and dialogue. During his visit to Serbia in September 2018, Vice President Naidu unequivocally reiterated India’s principled position on this issue. India keenly monitors developments on this important and serious issue.

How will you celebrate India’s Republic Day on 26th January?

The Republic Day of India (26th January) is of great significance to the history of independent India. It was on this date in 1950 that the Constitution of India came into effect, creating the provision for a democratic government system and completing the country’s transition to an independent republic. The date is celebrated throughout India, as well as at all Indian diplomatic Missions abroad.

At the Indian Embassy in Belgrade, we will have a flag hoisting ceremony in the morning for members of the Indian community in Serbia. There will additionally be a reception to which Serbian dignitaries, senior government officials, Serbian business leaders, representatives of the Serbian media, diplomatic corps, friends of India etc. will be invited. I also plan to organise a performance of Indian dance by Serbian dancers at the Reception.