Not playing along with the majority is always difficult in life. Spain’s stance on the Kosovo issue is too well known in the international community and among our other partners in the EU. And although it sometimes has some costs to our country, Spain will continue supporting Serbia on the Kosovo issue and working constructively to ensure peace and stability in the whole region, since we do strongly believe that is the right thing to do according to international law – Raul Bartolome Molina

Turning to experiences from his country, Bilbao-born Ambassador Raul Bartolomé Molina says that he believes “national identities should be guaranteed within broader and diverse states”. Spain supports the continuation of the dialogue between Belgrade and Pristina, but isn’t changing its stance on Kosovo’s unilaterally declared independence or on whether Kosovo can become a member of international organisations like Interpol, says Ambassador Molina.

Spain’s new ambassador arrived in Serbia this summer and agrees that bilateral relations are excellent, but that there is also room for progress in the area of economic cooperation, which will among his priorities.

Your excellency, you belong to a larger group of ambassadors who arrived in Serbia this summer. How were your first impressions?

These past months have allowed me to confirm the impression I got when I first visited Serbia in 2018, with then Spanish Secretary of State for European Affairs, Mr Jorge Toledo. 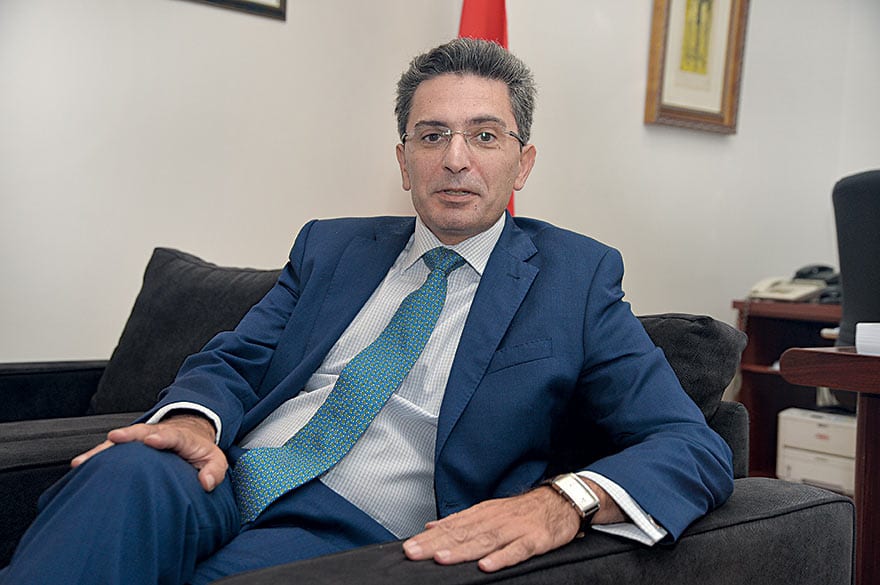 Serbia is a hidden treasure with its wonderful landscapes, welcoming people, a vibrant and lively cultural scene and tasty food. Someone told me that Serbia and its people are almost Mediterranean in spirit, and I cannot but confirm that.

Your predecessor described relations between Serbia and Spain as “exceptional, with mutual sympathy, cordiality and respect”. What are your plans for the next four years?

In my first meetings with Serbian authorities, I had the chance to confirm that my predecessor was absolutely right: our political relations are excellent. Nonetheless, in the economic arena, there is still plenty of room to manoeuvre. Although bilateral trade is increasing continuously, figures do not match those you would expect between two very close friends. Therefore, in the coming years, I will personally strive to foster our economic ties and bring Serbian and Spanish companies closer together. In that sense, the direct flights between Belgrade and Madrid and Barcelona, which started last June, are excellent news.

Kosovo issue is only one of those chapters, number 35. And it does not mention that Serbia must recognise Kosovo as an independent state. It says that relations between Serbia and the territory of Kosovo should be normalised

You stated in your first meetings with Serbian officials that Spain won’t change its stance regarding the issue of Kosovo and that your country will continue offering support to Serbia in defending its national interests. During previous years, we’ve gained the impression that your partners in the international community – particularly in the EU – have been seeking a change in that stance. Given that you were engaged in EU affairs prior to your arrival in Belgrade, could you say something about those possible calls to adhere to the stance of the majority?

Not playing along with the majority is always difficult in life. Spain’s stance on the Kosovo issue is too well known, in the international community and among our other partners in the EU. And although it has sometimes led to some costs for our country, Spain will continue supporting Serbia on the Kosovo issue and working constructively to ensure peace and stability in the whole region, since we do strongly believe that is the right thing to do according to international law. And, of course, we also support the dialogue between Belgrade and Pristina under the auspices of the EU, in order to find a comprehensive solution to this issue.

You were born in Bilbao – the largest city of Spain’s autonomous Basque community. Bearing in mind the experiences of your country, do you believe that issues of national identity can be resolved without changing borders?

History has shown us that changing borders is a never-ending story. I do believe that national identities should be guaranteed within broader and diverse states. There are mechanisms to allow different identities to live together and cooperate within the same borders (i.e., autonomous regions, federal states, etc.). And we live in a globalised world where national borders are ever less important.

In every divorce it is easier when both parties reach an agreement. Nonetheless, the EU (and Spain) has adopted all necessary measures in order to face a no-deal exit

Interpol has announced that Kosovo’s request to join this organisation will be considered again this autumn. What will Spain’s stance be in this regard?

We will act as on past occasions. No doubt about it.

Upon taking on your new post in Serbia, you reiterated that Spain supports Serbia’s European integration process. Do you believe that Serbia can become an EU member state if it rejects calls to recognise Kosovo’s independence?

Spain believes that Serbia must be a member of the EU family. It belongs to Europe and it is the only way for Serbia to achieve greater political stability and economic prosperity. But Serbia must implement the reforms necessary to pursue the objective of full integration into the EU. 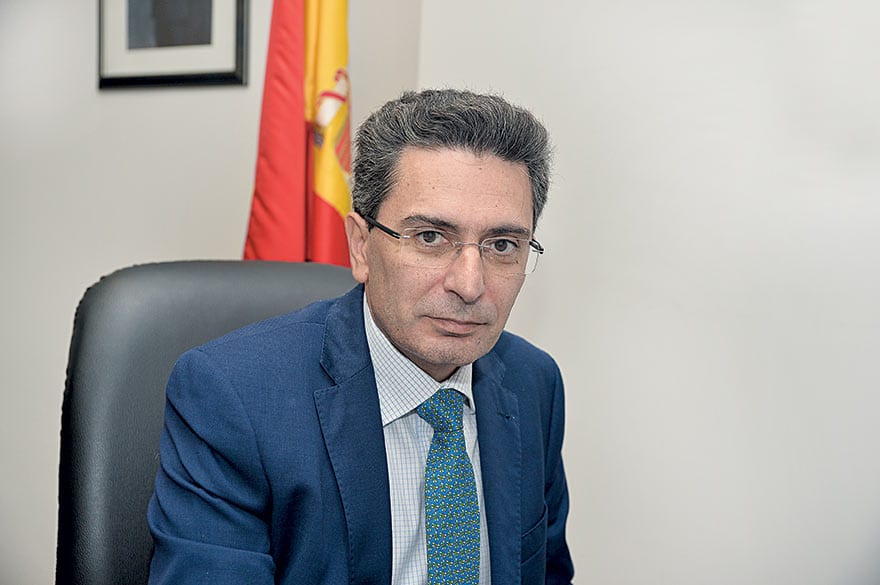 And that means that all the negotiating chapters should be screened and implemented, not only the Kosovo issue. The Kosovo issue is only one of those chapters, number 35. And it does not mention that Serbia must recognise Kosovo as an independent state. It says that relations between Serbia and the territory of Kosovo should be normalised. What normalisation means is precisely the goal of the dialogue underway between Belgrade and Pristina.

You served for several years in Spain within the cabinet of the State Secretary for the European Union. How does the EU look to you today? Is it stronger or weaker following the elections for the new parliament and European commissions?

The EU is immersed in a process of inner reflection regarding how it wants its future to be. I don’t think it is a question of strength or weakness, but one of updating a project funded more than 60 years ago and adapting it to the current international context. Of course, the EU is facing different challenges, but one could not say that they are more difficult or threatening than the ones overcome in the past.

What is your opinion on the conclusion of the Brexit situation – will there be a deal or no-deal exit of the UK?

I hope there is a deal exit of the UK from the EU, for the sake of both parties and our future bilateral relations. In every divorce, it is easier when both parties reach an agreement. Nonetheless, the EU (and Spain) has adopted all necessary measures in order to face a no-deal exit.

There have been plenty of comments in the region on the selection of experienced Spanish diplomat Josep Borrell as the new EU High Representative for Foreign Affairs and Security Policy. Advocates for the independence of Kosovo ask what kind of position a Spaniard will take if he takes over the coordinating of the Belgrade-Pristina dialogue?

As an experienced politician, Mr Borrell is fully aware that, as the new EU High Representative for Foreign Affairs and Security Policy, he does not represent Spanish points of view in international affairs, but those of 28 (or 27) member states. And that sometimes means juggling with different (or even opposing) positions on delicate issues like the Kosovo one.

Spanish companies are of course interested in the Belgrade metro, in the conviction they would contribute to Belgrade having an outstanding and modern metro

When assuming your duties as ambassador, you spoke about the strengthening of economic cooperation and announced a meeting between businesspeople from Spain and Serbia. Do you see any ways of generating interest in investing in Serbia among Spanish companies?

Incredible as it may seem, Serbia is still a country that’s yet to be discovered by Spaniards. During my mandate in Serbia, I will be devoted to reversing this fact, and in this sense, the direct flights I mentioned previously will definitely help in bringing both countries closer together.

It was mentioned during your recent meeting with the Mayor of Belgrade that Spanish companies are interested in the construction of a Belgrade metro. How serious is that interest?

Spanish companies in this field have a worldwide reputation for their state-of-the-art technology and the quality of their services. They have been involved in the construction of metros and light rail trains in the biggest cities around the world: London, Toronto, New York, Riad, Hong Kong… Spanish companies are of course interested in the Belgrade metro, in the conviction that they would contribute to Belgrade having an outstanding and modern metro.

The Spanish culture centre in central Belgrade is extremely active. Are plans already in place for the next season when it comes to collaboration in the domain of culture?

We have been in talks with Air Serbia from the very beginning and I am sure this dialogue will bear fruit and will materialise in lasting collaboration. I am very satisfied with the functioning of the Spanish Instituto Cervantes in Belgrade. It has spread the Spanish culture and language in this country over the years. We are now reflecting on how to deepen this task, reinforcing our cooperation with Serbian cultural institutions and the Spanish-speaking countries represented in Belgrade.

Alongside your accreditation as ambassador to Serbia, you also perform the same function in Montenegro. Have you had an opportunity yet to familiarise yourself with that country?

Due to the fact that I have not yet been formally appointed as Ambassador of Spain to Montenegro, I have not had the chance to visit it yet, but I am willing to travel there soon and enhance our cooperation with a country that is a NATO member state and an EU candidate.

It appears it’s not only Kate Middleton or Meghan Markle that recycles their best fashion buys, but Queen Letizia of Spain also isn’t afraid...
Read more

Semana Santa (Holy Week) will take place from March 20-27 2016, in Seville and other cities in Spain. The streets will be filled with thousands...
Read more

We sat down and spoke with the grandma of performance, arguably the most successful performance artist in history, and Giuliano Argenziano, director of Marina...
Read more