The Central Bank of Montenegro considers that the government is successfully implementing fiscal consolidation, and that and that, for its part, it is contributing to the implementation of these policies by empowering the banking sector through the continuous improvement of regulations and the strengthening of its supervisory function

Macroeconomic stability and the reform path of the Government of Montenegro contribute positively to increasing confidence in the banking sector, assesses Radoje Žugić, Governor of the Central Bank of Montenegro (CBCG), adding that this kind of policy has also contributed to reducing the risks associated with financing public debt. The CBCG actively supports fiscal consolidation measures through its own set of policies aimed at strengthening the position of the banking sector.

How would you assess the current situation in the financial sector?

– I consider the banking system as representing the most developed part of the Montenegrin economy. The banking sector is stable, liquid, and profitable, such that it is characterised by a high degree of security – through at the individual level certain vulnerabilities, which are continuously decreasing, do exist.

Banks’ assets, which are in amounts over four billion euros, have exceeded the 2016 GDP level. Total deposits amount to 3.3 billion euros and have also been marked by a significant increase of 14.83% over the annual comparative period. The growth in deposit potential is reflected in confidence in the banking system. On the other hand, a huge decline in non-performing loans has been recorded, from a level exceeding 25 per cent in 2011 to the current level of just 7.09%.

How satisfied are you with the results Montenegro has achieved to date in fiscal consolidation; has this process impacted on the state of the financial sector?

– The state of the financial sector is influenced by the fiscal situation and the situation in the sphere of the real economy, and vice versa, due to the strong interdependence of these policies. 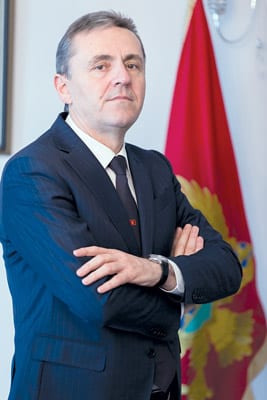 Under conditions of euroisation, the CBCG does not have enough “strong” instruments at its disposal, so the focus is on fiscal policy, which – through the stabilising and strengthening of public finances – contributes to overall financial stability. The government is pursuing fiscal consolidation with determination, which is yielding tangible results. Specifically, positive trends have been recorded in all economic, financial and fiscal parameters during last year and this, which have resulted in improved overall financial stability.

The CBCG provides a contribution to fiscal consolidation by strengthening the banking sector through the continuous improvement of regulations and the strengthening of its supervisory function. By moving towards the European Monetary Union, we will gradually strengthen our monetary policy instruments, and when we have an emission function we will also be able to provide even stronger support to the stability of the overall system.
STABILITY
Thanks to successful fiscal consolidation, positive trends have been recorded in all economic, financial and fiscal parameters

What are the CBCG’s key recommendations to the Government of Montenegro when it comes to the economic policy during this year and next?

– Given that the Government is implementing fiscal consolidation measures, our recommendations are primarily directed towards fixing the vulnerabilities of the real economy. Here I’m primarily referring to two key vulnerabilities of the real sector: liquidity and competitiveness. In this sense, recommendations are mainly focused on measures that would, when implemented, have a positive influence on the recovery of the real sector, primarily by impacting positively on the business environment, incentivising activities in the economy’s priority sectors and stimulating new employment.

In which aspects could the CBCG assist the government in its responsibility to devise and implement a strategy for public debt?

– The CBCG is legally obliged to provide its opinion on the Public Debt Strategy and its implementation, and we do so through constructive comments and the use of our expertise, all with the aim of providing the highest possible quality assessment of the risk profile of public debt.

Moreover, the CBCG also contributes to qualitative assessments of macroeconomic framework indicators. A clear picture of the macro-environment provides the possibility to choose the most realistic scenario aligned with objective trends, which will enable the achieving public debt sustainability in line with projected economic growth.

CBCG representatives, at the invitation of colleagues from the Ministry of Finance, also participate in international meetings and presentations at which individual financial arrangements are negotiated. One example was our participation in the roadshow of meetings with potential investors during the recent issuance of bonds.

The banking system represents the most developed part of the Montenegrin economy. It is stable, liquid, and profitable, characterised by a high degree of security

What do you consider as the greatest external risks to maintaining an acceptable level of public debt?

– I think the risks to public debt financing were greatly reduced following the adoption of fiscal consolidation measures and their implementation. This can also be seen through the latest IMF report on Montenegro. Likewise, it should also be noted that the funds required to finance public debt during this year and next have virtually been secured already.

Nevertheless, certain risks are always present, and when it comes to external ones, I think the key risk is normalisation of ECB monetary policy, which could lead to growth in interest rates that would have a further impact on increasing the cost of public debt financing. However, considering that economic growth in the eurozone countries remains fragile, and considering the numerous vulnerabilities, it is certain that the ECB – should it opt to start normalising monetary policy after September – will implement those measures very mildly and gradually, so it is unlikely that a significant increase in interest rates could occur in the near future.

Another potential external risk could be a possible serious economic crisis in Europe. Specifically, when the EU and the region faced serious difficulties, those problems spilled over into Montenegro and caused a slowdown in economic growth, which consequently resulted in falling public revenue. However, the chances of this scenario unfolding are slim.

Montenegro is a leader in the collection of foreign direct investments. To which factors would you attribute this success?

– I consider this to be a combination of several factors. First are adequate macroeconomic policies that have created a stable and predictable environment, combined with the use of the euro hard currency and continuous work to reduce barriers to doing business. Second, Montenegro has a very liberal system, with low customs duties and taxes, which is stimulating for foreign investors. 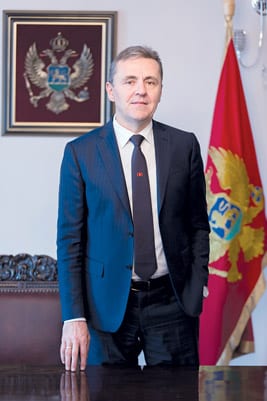 Through CEFTA and agreements with the EU, duty-free exports (or exports at low customs rates) to the countries of the region and the EU are possible for most products. Benefits for investors also shouldn’t be overlooked in certain sectors like tourism, nor adequate natural conditions for the development of other sectors, such as energy and agriculture, which I hope will be more properly appreciated in the future.

Also contributing to the attractiveness of the environment is the fact that Montenegro is a country in the process of EU accession and is, thus, gradually harmonising its regulations with those of the EU, and the fact that we are a member of the NATO alliance, which is a kind of security guarantee for foreign investors. Finally, we also shouldn’t overlook the quality of life, which is one of the important factors considered by foreign investors today, given that they tend to spend a significant amount of their time in the country where they’ve invested or may even relocate there permanently.

What are your expectations when it comes interest rate fluctuations on the banking market in the period ahead?

– Interest rates have recorded a constant downward trend in the last few years. This trend, together with the ECB’s measures, has contributed to and positively influenced the arrival of new banks on the market in the previous period, as well as growth in deposits and the liquidity of the banking sector, which is at a more than satisfactory level.

When it comes to the period ahead, interest rate movements will depend on ECB monetary policy.

In your opinion, what are the viable solutions when it comes to reducing insolvency in the enterprise sector and increasing their lending activity?

– Illiquidity has been one of the key points of our economy’s vulnerability for a long time and it is difficult to create a short-term solution to treat it, rather one must work systemically to create as many opportunities as possible to increase the profits of the economy, through advancements in productivity and competitiveness. Moreover, it is essential to work further on improving the business environment and reducing barriers to doing business, while state bodies should contribute to networking and expanding the market.

Economic activity would thereby increase, and the risk to the client and, ultimately, the country would reduce markedly. With a positive economic growth outlook, banks will have greater incentive to lend to the economy. This is a system of connected courts. In an effort to contribute to solving this problem, we last year amended legislation for the voluntary restructuring of debts, in order to improve the recovery of debtors and impact positively on the liquidity of the economy. The results of applications of the amended legislation are extremely good. At the level of the system, 42 restructuring contracts were signed, equating to approximately 21.5 million euros, while a restructuring contract for an additional significant amount is expected to be implemented in the period ahead.

Non-performing loans have recorded a huge decline, from a level exceeding 25 per cent in 2011 to the current level of just 7.09%

Does the state compete with companies for banks’ liquid assets, given that it places treasury bills on the domestic market?

– The placement of treasury bills on the domestic financial market could lead to the so-called effect of “expelling” liquidity from banks, which occurs in cases when the state and the economy “compete” for limited financial resources. However, under current conditions, the liquid assets of banks have exceeded the level of billions of euros, so the issuance of treasury bills/government bonds doesn’t threaten the credit activity of banks towards the economy. On the contrary, the latest stats confirm that it strengthens credit support to the real sector. As such, it could be said that purchasing government bonds represents a channel through which banks place their surplus liquid assets.

Considering that expectations that Montenegro could be among the first new members of the EU from the Western Balkans are increasing, could you tell us the extent to which standards and solutions in the Montenegrin financial sector have been harmonised with those of the European Union?

– Montenegro has, in the period to date, significantly improved the regulatory framework that regulates the financial system, while it is planned – according to Montenegro’s EU Accession Programme 2018-2020 – to comply fully with the EU Acquis in this area during this period.