TAFE’s takeover of IMT and its becoming a strategic partner of Serbia in the crucial sector of tractor manufacturing is an historic event that will improve Serbian agriculture, strengthen India’s commercial presence in Serbia and attract potential Indian investors to Serbia

Economic ties between India and Serbia received a significant boost during the visit to India of then PM and now President Aleksandar Vučić in January 2017, where he discussed potential cooperation with PM Modi, including in the areas of agriculture, food processing, defence, S&T, tourism, IT etc.

Relations between Serbia and India have a long tradition, but it seems that cooperation between our countries has recently been intensifying, especially in agriculture, the food processing industry and agricultural machinery. How would you assess our cooperation to date, and do you think there are opportunities to develop it further?

– In a strong push to furthering bilateral relations, Agriculture Minister Branislav Nedimović led 11 companies to ‘World Food India’ in November 2017, where Serbian products such as fresh and frozen fruits and vegetables attracted great interest. Minister Nedimović held bilateral meetings with the Indian Minister of Agriculture and Minister of Food Processing Industries to discuss the scope of bilateral cooperation. The signing of a phytosanitary agreement, which is in the advanced stages of negotiation, will be instrumental in enhancing bilateral trade in agricultural products. 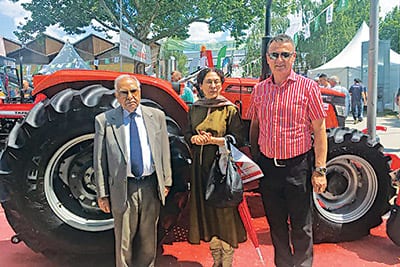 Bilateral trade saw year-on-year growth of 40% in 2017. We hope to see more visits from both sides in the near future, which will lead to the further expanding of two-way trade & investment, as well as the building of networks of cooperation for mutual growth and progress.

History was made on 2nd April 2018, when Serbia made an Indian company, TAFE, its strategic partner in the crucial sector of tractor manufacturing, under the IMT brand. Serbian PM Ana Brnabić was personally engaged in this project and was present, alongside Agriculture Minister Nedimović, at the signing ceremony in the Palace of Serbia on 11th April. This is not only a boost to Serbian Agriculture through tractor manufacturing and its export, but it also helps revive India’s commercial presence, which was adversely affected by the collapse of the former Yugoslavia.

Serbian Agriculture Minister Branislav Nedimović attended the food trade fair in India last November. He met his Indian counterparts and noted the huge potential for increased cooperation. What do you think are the specific areas in which substantial advances can be made?

– World Food India 2017 generated a huge boost to the Indian food processing industry by showcasing the immense investment potential of the sector and helping a variety of stakeholders in the process, thereby boosting the Make in India initiative. MoUs worth $14 billion were signed/exchanged/announced during WFI, which has now established itself as a brand India show.

Serbian products like frozen fruits, confectionery, dried fruits etc., received great interest at the fair and exhibitors held B2B meetings with potential Indian partners and representatives of various Indian states. The biggest interest was shown in the import of fresh and frozen fruits and vegetables, for which India is a huge market. Serbia may, in turn, consider importing tropical fruits like mango, pineapple, banana, papaya etc. from India. In order to facilitate this, a phytosanitary agreement is currently under negotiation.

The food processing industry is of enormous significance for India’s development, because of the vital linkages and synergies it promotes between the two pillars of our economy: industry and agriculture

This year saw the opening of the Wai Wai noodle brand factory in Ruma, an important investment. May we expect more investment in Serbia like this one, which relies on local resources both in terms of raw materials and workforce?

– Certainly, the success stories of TAFE and Wai Wai will send the right signal to the Indian industry to invest in Serbia. This will also help promote the local economy. Indian companies will have the opportunity to showcase their potential at the forthcoming Novi Sad International Agricultural Fair.

There is a lot of talk in Serbia these days about the sale of IMT. Indian company TAFE bought this old Serbian giant and is planning to start producing tractors. The Serbian public has welcomed this investment, which is expected to re-launch the manufacture of agricultural machinery in our country. How do you see this event?

– I am very pleased with this development. The revival of IMT will help significantly in terms of boosting Serbia’s agriculture sector. TAFE has been IMT’s partner for many decades since they started technology cooperation in 1962. TAFE, which is the oldest player in the region, sells approximately 750 tractors annually in this region and will produce IMT tractors for Southeast Europe, as well as other markets with which Serbia has FTAs. We hope that production will start soon, as TAFE plans to produce around 5,000 tractors in the first five years.

Prime Minister Modi has remarked that there is enormous potential for food processing and added value in fields such as organic and health foods. Will this soon be one of your advantages and an opportunity to take a dominant position in the world market?

The Government has launched a number of initiatives to promote this sector, including allowing 100% FDI. With a large agriculture sector, abundant livestock, and cost competitiveness, India is fast emerging as a sourcing hub for processed food. India has, thus, great potential for global trade in agricultural and processed food products. We are happy to see Serbia emerge as a willing partner, as a largely non-GMO country with strengthens in organised agricultural produce.

– In India, the importance of agriculture can be easily recognised by the fact that 58% of the workforce is engaged in the sector. Apart from Indian agri-machinery, such as tractors and irrigation equipment, there is interest in Serbia for imports of Indian tropical fruits, such as mango, papaya, banana and pineapple. Indian tea and coffee are also in demand in Serbia.