Against the backdrop of increasing threats to...
Read more

Russia’s ruble hit 52.3 to the dollar on Wednesday, an increase of roughly 1.3% on the previous day and...
Read more

Against the backdrop of increasing threats to journalists and thus impediments to freedom of expression and freedom to inform,...
Read more

Luka Gori was born in Florence on 27 July 1968, he graduated in political science from the University of...
Read more

Ambassador of India to Serbia Sanjiv Kohli sent a message today that "yoga is the golden key that unlocks...
Read more

Morocco welcomed 12.3 million tourists in 2018, enabling the country to position itself as the top African destination and the world’s 35th most popular tourist destination

The development of tourist flows to Morocco is our ultimate goal, and we are looking forward to increasing our connectivity with the region – Mohammed Sajid.

Morocco is a tourist country par excellence, with more than 12.3 million tourists having visited Morocco in 2018. With regard to the tourism sector’s strategic “Vision 2020” plan, can we talk about the “Success Story” of Tourism in Morocco, or are statistics not yet up to the expected objectives?

– Tourism occupies a priority place in Morocco’s economy and plays a vital role in its territorial, economic and social development. It was among the first sectors to be endowed, following the impetus of His Majesty the King may God assist Him, with a series of proactive and ambitious sector-specific strategies, the first of which dates back to the early 2000s.

With a direct contribution to GDP of around seven per cent, more than 550,000 direct jobs and total expenditures of around 132 billion dirhams in 2018, more than 90 billion of which were spent in foreign currencies, tourism is, more than ever, at the centre of calculations of our country’s economic and social development. This dynamism allowed Morocco to welcome 12.3 million tourists in 2018, a million more than in 2017, which enabled it to this year consolidate its position as the top African destination and maintain its ranking as the 35th worldwide.

After our establishing of direct flights to Budapest, Vienna and Warsaw, we expect Belgrade to be part of this gradual process, and I hope very soon

Following the entry into force of the air transport cooperation agreement between the Kingdom of Morocco and the Republic of Serbia, the number of Serbian tourists visiting Morocco has tripled in the last two years, despite the absence of a direct aviation route. Do you not think it’s time to established direct flights with Belgrade, which could also simultaneously serve the other countries of the Western Balkans?

– The increase of tourist flows to Morocco is our ultimate goal, and in this sense strengthening Morocco’s aviation connectivity and its accessibility is at the heart of our concerns. 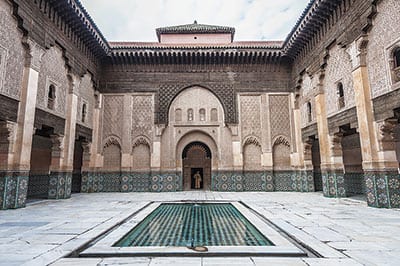 The cooperation agreement in the air transport sector signed between the Kingdom of Morocco and the Republic of Serbia is the perfect illustration of that, as it demonstrates our determination to open up entirely to this strategic region. That is important for us and has allowed several aviation links between the countries of the region and Morocco to be established recently (Budapest, Vienna, Warsaw etc.). I hope that this step, which is part of a gradual process, will cover Belgrade very soon.

As the minister, you also manage the ‘Handicrafts’ portfolio. This is an important sector that employs 20 per cent of the working population, but, above all, reflects the huge heritage and cultural and human wealth related to the history and traditions of the Moroccan people. What is your department’s policy for promoting this sector and supporting craftsmen whose knowhow, which is passed down from generation to generation, is starting to inspire today’s great designers?

– As you know, the Kingdom of Morocco has an age-old history and is located at the crossroads of many cultural, ethnic, religious and social tributaries that have, over the centuries, contributed to the enrichment of our history, our values and our material and intangible cultural heritage.

Handicrafts, in addition to their important contribution to the national economy (more than 2.3 million jobs) are an important medium for the protection and transmission of our ancestral heritage, traditions and know-how. In this sense, we strive to double our efforts to ensure all the factors and conditions of success necessary for development are placed in the service of this vital sector.

With a direct contribution to GDP of around seven per cent, tourism is – more than ever – at the centre of calculations of the economic and social development of our country

The history of Morocco is also the story of a social economy based on solidarity, which – in its traditional form – corresponded to a communal system of water management, ploughing, harvesting and gathering, storing foodstuffs, education etc. Today, under the modern economy, this can be considered as a solution for fighting poverty and the marginalisation of certain groups or regions. Is there a strategy for redefining and modernising social economy to ensure the inclusive economic development of Moroccan women and young people?

– Among the secular values and traditions of Morocco to which I refer, mutual aid and solidarity between individuals and communities have a place of choice. Indeed, many economic activities in our country have for centuries been based on these notions and have been developed and structured over the years. Thus, Morocco’s social and solidarity economy today counts more than 20,000 cooperatives, supervising more than 600,000 men and women, 130,000 associations and more than 53 mutuals.

In this sense, we set ourselves the objective of highlighting and reinforcing this sector’s contribution to job creation, and particularly the inclusion of different sections of the population, especially young people and women, which would allow us to contribute to boosting our country’s GDP in a more substantial way.