Miodrag Poledica, State Secretary at the Ministry of Construction, Transport and Infrastructure

Development of the road network should enable Serbia to connect with all of its neighbours in such a way that travelling to any capital in the region will not take more than three to four hours. In order to achieve the full effect of building new infrastructure, it is also necessary to reduce retention times at border crossings

The generally accepted and proven basic element for the development of a country and its economy is represented by high-quality infrastructure. The importance of good infrastructure for economic progress, as well as regional and global connectivity, has become an axiom; a postulate that time and again proves itself to be a model of advancement to such an extent that proving it to be such is unnecessary.

The Republic of Serbia, with its appropriate line ministry, applies this model and has been investing intensively and strategically in the development of infrastructure for several years, and consequently in the future of the national economy, which is becoming part of the single European market. The significance of high-quality infrastructure is also reflected in the fact that the accession negotiation process for the European Union defines two negotiating chapters (14 and 21) that relate to this area. The Trans-European Transport Networks (TEN-T) are conceived not only as drivers of integration between member states and their citizens, but also as carriers of greater economic development.

With the development of its road network, Serbia aims to connect with all of its neighbours, or with their capital cities, thus fulfilling the criterion of reducing travel times to no longer than three to four hours. In this sense, Corridor 10 and E-763 (Corridor 11) are the most important transport axes in the country. The length of the Corridor 10 road route through Serbia totals around 820km, with about 810km already included in a full highway profile, while Corridor 11 covers around 150km (Belgrade-Požega), with about 100km already built in a full highway profile. Investments in the highway network have contributed to increasing the number of vehicles, which is growing annually by between six and 15 per cent, and which in 2018 totalled just over 53 million vehicles.

Investing in infrastructure represents a driver of the economy at the moment of project implementation, given that it engages a large workforce, with workers of all structures, and utilises a large amount of raw materials and equipment. It has far-reaching effects, because it accelerates the development of the economy at the local level, enabling the launch of new activities, lowering prices of products, stimulating competition, enabling greater mobility and accessibility to end users, as well as and contributing to increasing citizens’ quality of life.

With the completion of the construction of Corridor 10 and part of Corridor 11, and with the significant positive effects of previous investments, Serbia is entering a new investment cycle. The level of investments planned in road, rail, water and air transport infrastructure is approaching a value of around five billion euros. 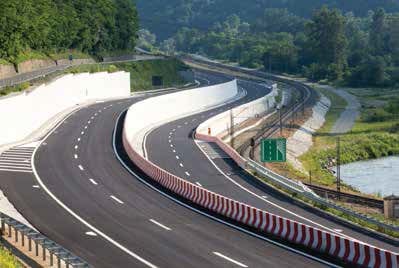 Projects are implemented on the core and comprehensive TEN-T network and have both national and regional significance. An example of one such project that’s expected to start in 2019 is the construction of the Preljina-Požega section of Highway E-763, covering a distance of 30.9km and valued at 450 million euros, which will enable unbroken highway transport from Belgrade to Požega, over a distance of 150km, and will provide the basis for the further construction of the highway towards the Montenegrin border and towards Sarajevo (Bosnia-Herzegovina). Furthermore, a connection with Bosnia-Herzegovina will also be realised via the Sremska Rača border crossing, with the construction of a Kuzmin-Sremska Rača section of the highway (18km), including a bridge across the River Sava, with a total of 225 million euros. A project that’s being implemented with significant resources from EU funds is the construction of the Niš-Pločnik section (about 40 km) of the E-80 Niš-Merdare Highway, worth 212 million euros.

Investments in the highway network have contributed to increasing the number of vehicles, which is growing annually by between six and 15 per cent, and which in 2018 totalled just over 53 million vehicles

Another important project is the construction of the Moravian Corridor, from Pojate to Preljina, covering a distance of 110km and with an estimated value of around 800 million euros, which connects central parts of Serbia with the two most important road routes, corridors 10 and 11. The construction of this roadway will increase accessibility to municipal centres, economic zones and tourist destinations. Alongside this, bypass roads will be built around major cities in Serbia, with freight traffic redirected away from city centres, thus increasing flows of traffic, enhancing traffic safety and reducing traffic congestion on urban roads and environmental pollution. The construction of the Belgrade Bypass is underway and is of great importance not only for the capital, but also for transit traffic in its entirety, as well as construction of the “Y” section near Subotica.

The construction of bypasses around major cities creates a convenient environment for the development of logistics and industrial centres. The development of a logistics zone is planned on an area of almost 70 hectares in close proximity to the future intermodal terminal in Batajnica, which is itself located in the vicinity of the Belgrade road and rail bypasses. A logistics centre is a place where economic activities and independent companies can be grouped together, and as such tenants would include companies and logistics operators that deal with transport, freight forwarding, customs clearances and related services. This enables a more efficient transport process that also reduces transport costs and, consequently, the price of products for final consumers.

When it comes to the implementing of all infrastructure projects in Serbia, significant attention is devoted to environmental protection, with the applying of various measures aimed at reducing the negative effects of traffic, with the mandatory preparation of an environmental impact assessment study for each individual project.

Further investments in transport infrastructure will have an additional impact on the creation of favourable conditions for economic growth, and – together with a good combination of credits and grants, and the increased efficiency of companies engaged in the management and maintenance of infrastructure – will enable the creation of a sustainable and reliable transport system.