We have started and are planning significant infrastructure projects in all transport sectors, which will make Serbia a regional transit hub and attract investors in logistics

The Ministry of Construction, Transport and Infrastructure is carrying out all the necessary activities to provide developed and reliable railway infrastructure. Since 2015, 257 million euros has been invested in rebuilding 138 kilometres of railway trunk lines.

How will major transport infrastructure projects impact on the pace of growth in the Serbian construction sector and related industries in 2017?

– The effects of the investment are primarily reflected in the increased speed of trains, from 40-50 km/h to 100-120 km/h, increased capacity of the renovated tracks and increased safety of the railway transport. As a result, the number of passengers to some destinations and the volume of international freight transport has increased. The best evidence of the latter is the growing number of container block trains, operated by Chinese shipping and logistics company COSCO, from 254 trains in 2016 to 388 just in the January– September 2017 period. It’s fair to assume that there may be twice as many trains of this type this year compared to last year.

There is huge potential for new investments in logistics, but for that to be realised it is necessary for the entire region to have good quality and efficient infrastructure connections

What are your estimates regarding the volume and the value of works next year and the trends in the Serbian construction industry?

– Regarding the railway sector, the plan is to launch works on 143.4 kilometres of tracks in 2018, marking a project worth 372.4 million euros. The works that have started on 104.3 kilometres in 2017, worth 633 million euros, should also continue. Bearing in mind that infrastructure development projects may last a few years and involve many domestic construction companies, the high funds that will be invested in the project will circulate on all levels, which will impact on the development of the construction sector and, consequently, the Serbian economy.

Regarding the construction of new motorways in 2018, construction works will continue on the Belgrade bypass (Ostružnica-Bubanj Potok section), 19.5 kilometres long, and on the 31-kilometres-long Preljine–Požega section of the E-763 (Corridor XI).

What will be the total revenue from transport in 2017?

– According to the business plans of railway companies Serbia Cargo a.d. and Serbia Train a.d., the estimated total revenue from transport in 2017 will be 11.5 billion dinars. 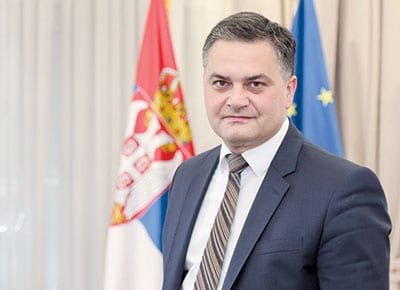 Of course, this is an estimate –total revenues and expenses will be known at the end of 2017. Similar to other countries, passenger transport is subsidised by the state. Our national freight transport company, Serbia Cargo, operated from its establishment to August 2015 without government subsidies, and all its profits were paid into the national budget. With regard to road transport, there are around 1,200 registered private international road transport companies in Serbia. According to some estimates, their total annual income is around 80 billion dinars.

How prepared is Serbia for EU Accession Negotiation Chapters 14 and 21? How likely is it for these chapters to be opened soon?

– The Ministry of Construction, Transport and Infrastructure has drafted the texts for Chapter 14 – Transport policy, and Chapter 21 – Trans-European networks, which are currently being harmonised with the European Commission. There are no opening benchmarks for these two chapters, which proves that our legislation in this area is good.

What do you expect from the application of the Transport Community Agreement now that all countries in the region have signed it?

– Considering that the Transport Community Agreement will allow for an increase in investments in transport infrastructure and its phased harmonisation with EU legislation and standards, the necessary preconditions for the establishment of a single regional transport market will be created.

In the railway sector, the plan is to launch works on 143.4 kilometres of tracks in 2018, marking a project worth 372.4 million euros. The works that have started on 104.3 kilometres in 2017, worth 633 million euros, should also continue

There will be numerous benefits, such as mutual integration of the transport markets of the signatory countries into a single market and its integration into the transport market of the EU, simplified administrative procedures when moving from one customs area to another, in accordance with the provisions of the Agreement concerning customs cooperation between the EU and each signatory country, and more efficient use of the funds of international financial institutions and the EU, in the spirit of expansion of TEN-T (basic and comprehensive) to the territory of the Western Balkans.

In addition, Serbia has officially applied to be the home of the Secretariat of the SEE Transport Community, and, with the support of all regional stakeholders, we hope Belgrade’s application to be successful.

How do Serbia’s priorities in this area fit in with the plans to connect the region on the infrastructural level and establish a customs union?

– Considering everything the Serbian Government is doing to become a member of the EU as soon as possible, this agreement has shifted the interests of transport towards the interests and objectives of EU transport policy and the convergence of the entire region in terms of honouring EU transport principles. The establishment of the Customs Union would mean the abolishment of all internal customs tariffs and quotas, enabling the free movement of goods and thus making the region a more favourable environment for investment and more attractive to multinational companies.

The economic development of the region requires a well-developed transport network. Serbia recognised this a long time ago, while other Western Balkan countries have joined under the Connectivity Agenda over the past couple of years. In addition to their need to realise infrastructure projects, it is equally important for Serbia and the countries of the region to work together to remove non-physical barriers, as is the case with the initiative to establish joint border stations with all neighbouring countries.

Experts say that we need logistics centres, goods terminals and intermodal transport systems to connect our businesses and our market with the European transport network and ports on the Adriatic, Aegean and Black Seas. How high on the Ministry’s agenda are these goals?

– Because the Ministry of Construction, Transport and Infrastructure follows global and European trends and tendencies with a view to reducing emissions of harmful gases, and it supports environmentally friendly modes of transport, intermodal transport is one of the ministry’s priorities.

What does this mean for the first intermodal terminal with a logistics centre in Batajnica, the building of which has been repeatedly announced for years?

– Intermodal transport will make it possible for the commodities to get to their end-users in Serbia faster, better and at a lower price, as is the case in the developed world.

This is why we launched a project with the aim of building the first logistics centre in Batajnica near Belgrade, with an intermodal terminal at its heart. 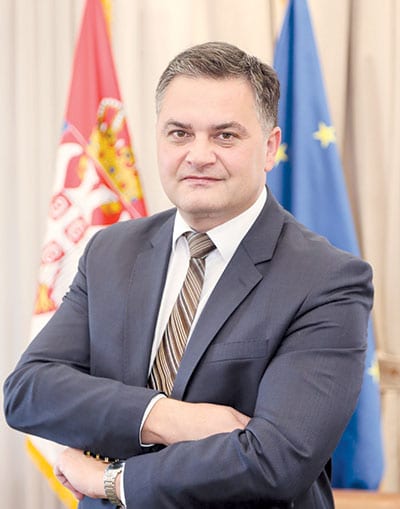 The terminal will be a place where road and rail transport intersects, where freight trains from Adriatic ports and European centres arrive, and where containers are loaded and unloaded, stored and distributed to end-users by road, covering a radius of 100 to 150 kilometres. The entire logistics centre would operate according to the basic logistics principles “door to door” and “on time”. This will help reduce the share of logistical costs in the price of goods in Serbia to the European average. The share of logistical costs like transport, storage and stocking in the total price of goods in the EU is 10 to 12 per cent, while in Serbia it can be as much as 20 to 25 Per cent.

In the near vicinity of the intermodal terminal, there should be a logistics zone, sprawling over nearly 70 hectares. It is estimated that dozens of companies could be grouped in the logistics zone, which means creating 1,000 jobs.

How developed is the Serbian private logistics sector and how competitive is it on the market?

– I think the Serbian private logistics sector is developed and has excellent scientific and educational bases in our higher education, especially in the Transport School of the University of Belgrade. There are many logistics companies, both foreign and domestic, which successfully provide their clients with a wide range of logistics services in water, road and rail transport, contractual and integrated logistics, and customs representation.

– Bearing in mind the geographical position of Serbia, I think there is huge potential for new investments in logistics. However, for that to be realised it is necessary for the entire region to have good quality and efficient infrastructure connections and to simplify transport and logistics procedures.

The results of reforms in the construction industry are visible through an influx of new investments, construction growth in the number of construction permits,...
Read more

Zoran Lakićević, State Secretary at the Ministry of Construction, Transport and Infrastructure

The utility infrastructure projects that Serbia is implementing in the field of water supply, wastewater management and solid waste management, with the support of...
Read more

The reform of the real estate cadastre, following the e-permit reform, is the next major reform for our construction sector and one of the...
Read more

Minister Mihajlović Marks A Year Of The Serbian Government

Deputy Prime Minister of Serbia and Minister of Construction, Transport and Infrastructure, prof. Dr Zorana Mihajlović marked the year of the Government of Serbia...
Read more

“The Future Of Welfare State In The Western Balkans” Conference Held

More than five million people in the past ten years have left the region, and therefore joint initiatives are needed to achieve a higher...
Read more

Zorana Mihajlović: The Future of Welfare State in the Western Balkans

More than five million people in the past ten years have left the region, and therefore joint initiatives are needed to achieve a higher...
Read more

We Prepare Thoroughly For Each Move

Serbia is today a country with regulated public finances, which has enabled it to launch and finance an ambitious new cycle of infrastructure works,...
Read more
Cord MagazineLeaders Meeting Point