Problems that have accumulated in the Serbian construction sector since the 1990s led to the construction industry facing collapse in 2013, with construction companies in debt and only a few cranes and a few hundred construction sites active across the whole country.

There is an existing opinion that suggests people are driven by two things: the intolerability of their current situation or an idea, vision or goal that is challenging enough to drive them in a direction that they think will bring them a life worth living. The situation reached in the construction sector in 2014 imposed both need and vision. It was necessary to introduce modern technologies and e-governance to this field, but simultaneously to believe in the indispensable role of people with vision. That’s because it is precisely a vision that sets successful people apart from those who are average and unsuccessful.

E-PERMITS AS A MODEL OF SUCCESSFUL REFORM

The situation imposed a need for decisive and comprehensive reforms in the construction sector, which implied painful cuts and breaks with bad habits acquired. In that sense, the Ministry of Construction, Transport and Infrastructure implemented radical changes in all areas in the period from 2014 onwards, in order to ensure the comprehensive improvement of the construction sector. The reforms that we implemented weren’t only in the domain of infrastructure projects, without which it would not be possible to raise the level of the construction industry, rather it was also necessary to create a legal framework that enables the influx of new investments, which provides legal certainty and introduces clear and simple procedures aimed at ensuring a legal approach.

Thus, when we first mentioned that a construction permit could be issued within a period of five days, instead of the then norm of 264 days, that an investor no longer need walk from counter to counter, sometimes visiting dozens of different institutions in order to acquire conditions for a location, in order to be able to increase the number of construction sites from several hundred to tens of thousands, in order for property rights to be able to be registered electronically, and in order for the construction industry to again become a driver of economic and business growth, we didn’t yield in the face of the unbelieving and passive attitude of many who were discouraged by the long years in which every form of progress was impossible. However, we knew the Serbian proverb “fields need hoes, and not hopes”, and instead of accepting the “immutability of the situation” we didn’t waste energy on fears, rather we used it to work and persevere to ensure progress.

The new system for registering property rights revoked the previous need to “wander” between five counters by introducing a “one-stop-shop” system, which starts and ends for citizens in the office of a public notary

The greatest achievement and example for other reforms was certainly the introduction of electronic construction permits. In the 2015 report of the Doing Business Index, Serbia was ranked 186th worldwide in the area of construction permit issuance. At that point, we were only ahead of countries for which the World Bank had no data or countries that were then at war (Eritrea, Libya and Syria). In a period of just three years, we managed to enter the world’s top 10 and are today competing with the world’s most developed countries.

Investment in transport infrastructure, coupled with simplified procedures and better-operating conditions, resulted in the construction sector again becoming the carrier of GDP growth after a break of many years, and this happened in 2018 when real GDP growth totalled 4.4% – the highest in the preceding 10 years. The value of completed construction works increased by 140 billion dinars (1.2 billion euros) from 2013 to 2018, i.e. from 189.5 billion to 332 billion dinars. 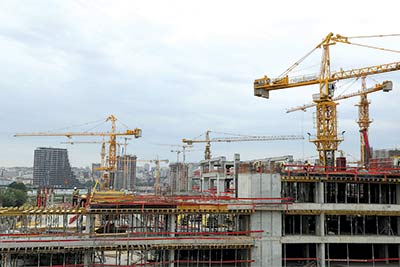 Proof that things are progressing in the right direction and that the results of reforms are evident and felt in real life is provided by the fact that we have advanced in just a few years from only a few hundred construction sites to more than 39,000 active sites.

One of the most important reforms we are currently implementing is cadastral reform, which last year resulted in the launch of a completely new system for registering property rights, with which we revoked the previous need to “wander” between five counters by introducing a “one-stop-shop” system, which starts and ends for citizens in the office of a public notary. Implementation of this law to date has proven very effective, as evidenced by the average period required to make a cadastral entry, which totalled 5.24 days in the third quarter of 2018 and 4.88 days in the fourth quarter.

E-GOVERNANCE FOR PLANNING DOCUMENTATION TOO

We have also adopted a unique Law on Construction Products for the first time, which is harmonised with EU standards. This law should ensure the better quality of facilities to be constructed, in terms of stability, security, accessibility, greater energy efficiency, energy savings and the sustainable use of natural resources.

Moreover, we are also beginning implementation of the new E-Space reform, which should ensure a completely electronic procedure for the drafting of planning documents, thereby speeding up the process, rendering it transparent to all participants and improving the actual issuance of acts based on these plans.

Alongside all commenced reforms, we are also awaited by the future development of the “smart cities” concept, which implies – among other things – the implementing of sustainable technological solutions, renewable energy sources and modern construction materials, in which energy savings and pollution reduction represent contributions to energy security and environmental protection.

Thus, we are awaited by new challenges, new reforms, new projects and the struggle for a better tomorrow. With an awareness for the real roles of our lives, we are committed to acting responsibly towards the lives of those who will continue where we stop – the children we have, those who are yet to be born and who will, like us, one day ask how their ancestors lived and whether they left them a society that was better than the one they inherited.