The government of the Republic of Serbia adopted a set of draft election laws: the Bill on the Election...
Read more

According to preliminary results, voters who went to the polls on Sunday in Serbia to vote on amendments to...
Read more

The Republic Electoral Commission held its second extraordinary press conference on 17 January 2022 at noon to announce the...
Read more

Unregistered Labour One Of The Greatest Threats To National Economy

A labyrinth of complicated procedures and a host of charges get in the way of modern business, which is why they need to be reduced to an acceptable level. The state has to serve its citizens

Farmers will soon have their own call centre, where they can get all the information they need from the state authorities. They are currently quite uninformed. In talking to them I came to realise that they don’t know anything about the opportu­nities they have at their disposal, or the funds and subsidies available to them – says Serbia’s new agriculture minister, adding that farmers will be able to hear about procedures for subsidies and loans.

What is the most important thing you learned in NALED that you can now use as a minister? 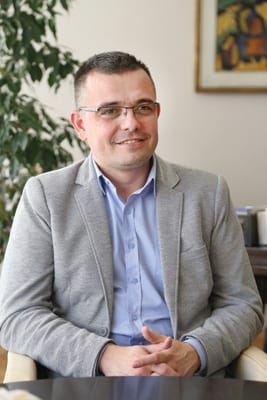 It is difficult to single out just one thing from working with top experts at NALED. Working for the Alliance has made it possible for me to gain good in­sight into the problems that are hindering our economy: complicated procedures, and unnecessary paperwork that com­plicates the lives of ordinary citizens and businesspeople.

We really have to reduce this jungle of regulation to an acceptable level and make it easier for people. If I had to choose one thing that I took with me from NALED, it would be an uncompro­mising ambition to reach this goal and be part of an administration that will be of service to all citizens.

One of the last initiatives you launched at NALED before becoming a minister was combatting unregistered work in agri­culture by introducing vouchers for sea­sonal workers. Although your Ministry is not directly responsible for this, do you know when the government will pass a law to regulate this?

The next agricultural season is defi­nitely important when it comes to legalising seasonal work. Unregistered workers and the grey economy are the biggest threats to national economies. Apart from the workers themselves not having their basic rights, companies that hire unregistered workers are putting themselves at risk because these people are usually unreliable. No good worker would accept such working conditions.

Our priority for the coming period will be developing fruit and vegetable production and processing capacities. Prime Minister Vučić has expressed his strong support for this segment of the economy. The agriculture budget will have more money available for all sorts of grants and subsidies, and the Ministry will provide special funds for encouraging investors in these sectors

If this continues, companies will be able to get a mediocre workforce at best, which limits their chances of success from the start. The point of the new law is to create a framework that would facilitate a partnership between workers, employers and the state.

What agricultural projects are you planning and can NALED help you with them?

NALED has actually initiated many projects that can completely change the way the state administration works. e-Government is undoubtedly one such project. When it comes to agriculture, e-government will enable farmers to file subsidy applications online and to receive them if they meet the requirements.

This has not been possible until now. Once we simplify procedures and the state starts providing clear and precise support, I am confident that investment in agriculture will see strong growth.

Where do you think NALED will be when your term expires in four years?

When my term expires, I am confident that NALED will be in a position from which it will be able to see an efficient state administration, much better than at present, while having played a crucial role in making it so.