Both Quantity & Quality of Cooperation Improving

Slovenian and Serbian companies are entering into increasingly complex forms of cooperation, creating consortiums for joint production operations and the joint development of products and services in almost all segments of business, from agribusiness, via industry to ICT, the creative industries and scientific-technological cooperation

Considering the growing mutual interest among the two countries’ businesspeople in connecting and expanding possibilities for cooperation, the Serbian Chamber of Commerce & Industry has decided that the first representative office in the region that it will renew will be precisely in Ljubljana. The results of the trade exchange, as well as the creation of new opportunities for operations and cooperation between Slovenian and Serbian companies, ensure that this decision is fully justified. Specifically, the trend of growing mutual trade, which has lasted for almost two decades – with the exception of certain declining results during the years of the global economic crisis – continued in the first months of this year.

“It is realistic to expect that we will this year surpass last year’s record-breaking trade exchange result, which, according to official Serbian statistics, amounted to 1.14 billion euros, or 1.65 billion euros if we count the exchange of services,” says CCIS President Marko Čadež. “However,” he continues, “for small economies like Serbia and Slovenia’s, apart from increasing the exchange, there is also growth in the number of companies trading mutually and the value of investments, both Slovenian in Serbia and Serbian in Slovenia, and it is particularly important that our companies, particularly SMEs, are increasingly connecting through joint projects.”

Can you cite any specific examples?

– Footwear manufacturers DAG-CO from Serbia and Alpina from Slovenia are appearing jointly in Austria and Germany, while textile company STIM-IMPORT from Loznica is working together with its Slovenian partner in establishing a presence on the Swiss market. Jointly approaching customers in 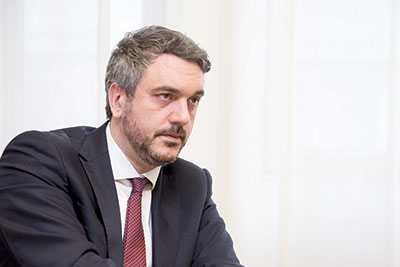 Europe and the world are our manufacturers of personal protective equipment, furniture and honey, such as Serbia’s Medino and Slovenia’s Medex. Winning over investors from elsewhere in the world are Slovene-Serbian start-ups Prospeh, with its application for the food industry, Origin Trail and LeanPay, which are focused on point-of-sale financing. There are also ever more film co-productions with the joint stamp of Slovenian and Serbian producers and filmmakers, who participate together in competing for support funding in both countries. We are also recording examples of consortiums of Slovenian and Serbian construction and design companies.

In which areas does the most room exist for Serbian companies to further penetrate the Slovenian market and for cooperation among business people from the two countries?

– According to CCIS analysis, the greatest chances for increasing exports to the market of Slovenia are among producers of foods, plastics and furniture, as well as the electrical and metal industries. Apart from the industrial branches in which we traditionally cooperate, potential areas of future cooperation and company networking, but also the expected new wave of Slovenian investments, are to be found in sectors such as IT, tourism – with an emphasis on new tourism products and concepts, and the green economy, especially the recycling industry, municipal waste management and wastewater treatment.

The most recent Serbian-Slovenian Business Forum, held in Belgrade at the beginning of this year, included plenty of companies hailing precisely from the IT sector and tourism. Is it possible at this stage to provide some indication of possible volumes of cooperation in these domains?

– The possibilities are enormous when it comes to mutual connections and joint bilateral and regional projects in these areas. In Serbia, which is the region’s fastest-growing IT market, there are almost 90 ICT companies with Slovenian capital already operating, while Serbian company Comtrade, the largest software company in Slovenia, now has more than 600 employees and centres in three locations in Slovenia – Ljubljana, Maribor and Nova Gorica, while the examples of joint start-ups that I’ve mentioned indicate that our innovative communities already collaborate and utilise opportunities to connect mutually.

We expect a new wave of Slovenian investments in IT, in tourism – with an emphasis on new tourism products and concepts – and in the green economy, especially the recycling industry

In the field of tourism, Slovenia is a regional leader in ecological, rural, spa and wellness tourism, and is having great success in building the glamping [glamorous-camping] concept, which has been a trend around the world in recent years. This creates opportunities for Slovenian investments and the applying of Slovenian experiences in Serbia. Simultaneously, with their investments, large Serbian companies have already become part of Slovenian tourism. Alongside its investments in Slovenian banking, Serbia’s MK Group also became the owner of the Kempinski Hotel and Portorož Airport, and is interested in further investments, while Delta Real Estate plans to build another hotel following its construction of the Intercontinental in Ljubljana.

Representatives of the Chamber of Commerce & Industry of Slovenia have also noted the possibility of cooperation in transforming the economies of the two countries towards Industry 4.0. Are the two chambers working on tangible steps towards realising this plan? 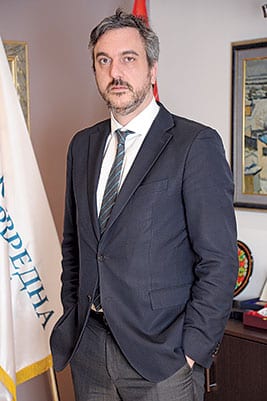 – Apart from Slovenia being one of Europe’s best examples of the digitisation of public administration, the Slovenian economy has also already reached a high level of digital transformation. Serbia has more than 200 manufacturers of automotive parts – automotive industry suppliers – and the Slovenian economy’s experience in digitising and automating operations in this segment is especially useful for us, as its production processes are based on the basic postulates of Industry 4.0 and are aligned with the requirements of multinational companies. Slovenian companies that operate in Serbia apply the latest technologies in our country and transfer this concept to the local market through business arrangements with suppliers and partners.

We are grateful to the Chamber of Commerce & Industry of Slovenia for using joint activities with us to share their experiences, know-how and recommendations for smart growth created through the European project INDUSTRY 4EU. With the Pomurje Technology Park and partners from another nine countries, we are finalising the Smart Factory Hub project, the main goal of which is to improve conditions for the application of new technologies and innovative solutions in factories, based on the Smart Specialisation Strategy.

The CCIS is opening its first foreign representative office in Ljubljana. On which services can Slovenian and Serbian businesspeople rely on?

– Our goal is to ensure that both Serbian and Slovenian companies – in direct contact and together with colleagues from the Chamber of Commerce & Industry of Slovenia and the Slovenian Business Club in Belgrade – are as well informed as possible about the offers, needs and opportunities for trade, investment and other forms of cooperation on our markets, for us to promote opportunities and potential to invest in our economies, to encourage joint bilateral and regional projects, and joint appearances on world markets, to integrate our resources as best as possible and network companies, and to be as useful as possible in providing support for our businesspeople in establishing contacts, preparing and implementing investment projects, and in other business arrangements.

Ms Bieńkowska participated in a panel discussion on the topic “Accession to the European Union: industrial policy and policies of small and medium-sized enterprises...
Read more

Respected readers, As you may know, I arrived in Belgrade only recently and I am glad to observe the dynamic development of truly diverse relations...
Read more

We Have a Strong and Clear Focus

Halcom is a pioneering company in the development of modern solutions for payment systems, and thanks to its rich experience and innovation, its solutions...
Read more

The conference “Nordic Innovative Business in Serbia”, co-organised by the Nordic Business Alliance and the Embassy of Finland, saw discussion of the ways in which it is possible to improve the investment climate in Serbia
Read more

The Embassy of Greece in Belgrade, in cooperation with the Chamber of Commerce & Industry of Serbia (PKS) and Greek development agency “Enterprise Greece”,...
Read more

Serbian company NeoMedica from Niš will soon be the first in the region and one of the few in the world to begin the...
Read more

There is no doubt that the Western Balkans and EU enlargement will remain high on Germany’s agenda. Whoever becomes the next Chancellor will certainly...
Read more

There are great opportunities for cooperation between German and Serbian companies, and both sides are ready to use those opportunities. German companies that currently...
Read more

At the pavilion of the Republic of Serbia, at this year's World EXPO 2020 held in Dubai, a Memorandum...
Read more
Cord MagazineLeaders Meeting Point