For the first time since they formed part of a common country, Slovenia and Serbia last year exceeded the figure of a billion euros in their bilateral trade exchange, and at the beginning of 2018 Serbia is recording a surplus in this trade, with a large number of Slovenian exporters who invested here contributing to that, but also the agility of domestic companies that are increasingly improving their position on the Slovenian market

Last year, according to official Serbian statistics, was the first time since the time of the shared state and the common Yugoslav market that mutual trade between Serbia and Slovenia exceeded one billion euros, while 2018 also began with balanced commodity exchange. This growth trend, which has lasted for almost two decades – with some declines during the years of the global economic crisis, has continued in the first months of this year. By the end of March, the total exchange increased by 17.2%, while Serbian exports were up 31.4% compared to the first quarter of last year.

“From the perspective of the Serbian economy,” says Marko Čadež, president of the Chamber of Commerce & Industry of Serbia, “this is especially important because we managed to overcome the constant deficit that burdened our trade with Slovenia for years, and for the first time we have full coverage of imports by exports, with a surplus of several million euros.”

“This increase in our trade, especially Serbian exports, was contributed to greatly by the Slovenian companies that invested here, operate successfully on the Serbian market and are among the largest exporters from Serbia to the Slovenian market,” explains the CCIS president.
Serbia today has more than 1800 registered businesses with Slovenian capital (851 with the majority capital of Slovene companies and citizens), more than 400 of which have serious business operations on the Serbian market. According to Slovenian sources, total investments of companies from Slovenia in Serbia exceed 1.2 billion euros.

From the perspective of the CCIS, what are the most important activities that can contribute to the continuation of these positive trends?

The Chamber of Commerce & Industry of Serbia has continuous successful cooperation with the Slovenian Chamber of Commerce and the Slovenian Business Club, based on mutual understanding and the mutual interests of our economies in connecting, strengthening mutual trade and accelerating investment flows. This interest is best confirmed by the business forums that we organise jointly in Serbia and Slovenia. The last two forums – the October forum in Belgrade and the February forum in Ljubljana – brought together participants from around 400 Serbian and Slovenian companies that operate in various fields of business – manufacturing and service sectors.

Opportunities for our businesspeople to connect are also represented by the trade fairs/expos in Slovenia, Serbia and the region in which our companies traditionally participate, which contribute to the better positioning of our brands on the markets of the two countries and to connecting our economies.

Serbia will be the country partner of this year’s 51st MOS – International Trade and Entrepreneurship Fair, which will be held in the Slovenian city of Celje from 12th to 16th September. Serbian companies will present their production programmes at a national stand measuring around 500 square metres.

Previously non-standards areas are emerging as a new space for cooperation, such as digitisation, environmental protection and the start-up environment. Do they also provide for new forms of networking and cooperation between business actors?

Those are – alongside the traditional sectors of cooperation between Serbia and Slovenia, such as the food industry, the plastics industry, the furniture industry and the metal industry – potential domains for future cooperation and connectivity, but also for the expected new wave of Slovenian investments.

For Serbia, it is invaluable to have access to Slovenian experience and to have support in the European economic integration process, the digitisation of public administration, the economies and their mutual communication in the development of the private sector – small and medium-sized enterprises, ICT, continental tourism and ecology. 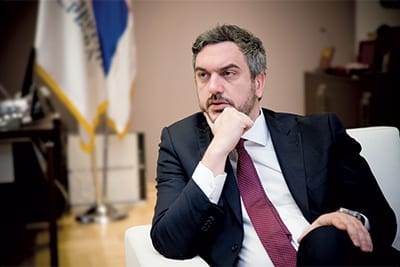 Apart from in the construction of our E-government system, where we use elements of the Slovenian model and where we are assisted greatly by Slovenian experts, the experience of Slovenia – which fully implemented the new European regulatory framework (e-IDAS) as of 30th June last year – will be useful to us in the implementation of electronic documents and electronic signatures, and in the practical implementation of legal solutions.

Slovenia’s support is significant for all Western Balkan countries in implementing measures in the field of digitisation, under the auspices of the implementation of the Multi-annual Action Plan on a Regional Economic Area, as well as in the digitisation of the SME sector. For us, for example, there is particular interest in the experience of the digitisation of the Slovenian auto parts industry, which has 278 operating companies and exports worth almost three billion euros annually.

A good example of cooperation in the implementation of joint projects is the Serbian-Slovenian investment in the wastewater treatment plant in Zlatibor, worth a total of 4.5 million euros, and for which the Slovenian government provided 1.5 million euros. This plant is being jointly constructed by a consortium that includes companies ‘Jedinstvo’ from Sevojno, ‘Beohidro’ from Belgrade and Slovenia’s ‘Hydroinženjering’.

After a break of many years, a trend of Serbian investors entering the Slovenian market is also evident. From the CCIS’s perspective, how do you view the accelerating of such movements?

Moreover, the number of registered companies in Slovenia with purely Serbian or mixed capital reached the figure of 1,200. Serbian companies from some sectors, such as transport, have decided of late to register their companies and run their operations from Slovenia, which is a member of the EU because in that way they have better access to the unique European transport market.

In recent years there has been growth in the number of Serbian companies investing in investment projects in Slovenia. The Serbian- Slovenian Business Association was established last year and brings together around 30 large companies of Serbian investors present on the Slovenian market. Those who have already invested, such as Comtrade, MK Group, Nectar or Delta, have had the most positive experiences, so it is realistic to expect more Serbian investments in Slovenia in the period ahead.

The Conference “Siemens - Partner for a sustainable transition to 4.0 Industry” was held with the aim of pointing out the key challenges of...
Read more

In Serbia 600 companies interested in joining the dual education system

Teaching at 84 secondary vocational schools in Serbia is realised through at least one of the total of 32 dual educational profiles, which means...
Read more

Entrepreneurs Association “Start Up for Your Business” Founded

The Serbian Chamber of Commerce & Industry officially marked the beginning of the “Start-Up for Your Business” Association of Entrepreneurs. The Association will bring...
Read more

SMEs as Partners in Organisational Development

The Serbian Chamber of Commerce and Industry and Advantage Austria held a panel discussion addressing the topic of finding a more successful format for...
Read more

According to experts, Xi Jinping will very likely secure another five-year term as China's leader, at the upcoming National...
Read more