Just as it isn't known how long...
Read more

It is encouraging that half of the...
Read more

Serbian Chamber of Commerce And Industry

Serbian-German economic cooperation shouldn’t only be measured according to the volume of the trade exchange, which has respectable dimensions of scale. Links between companies from the two countries have increased significantly over the last few years, which is testified to – among other things – by the decisions of German companies to reinvest in Serbia, open research centres and include Serbian companies in their production and distribution chains

The German economy has undoubtedly played one of the most significant roles in the economic growth of the countries of Eastern Europe and the strengthening of their industries, particularly in their European Union accession processes. The countries of the Western Balkans, including Serbia, hope that the arrival of foreign investors, especially from Germany, could lead to similar results.

We discussed the development of cooperation between the two countries with Marko Čadež, President of the Chamber of Commerce & Industry of Serbia (CCIS).

Germany is only ranked fifth largest in terms of investments in Serbia, despite an evident rise in investment over the past few years. How do you explain this? Why are German companies only discovering the Serbian market after great delays?

– The investments of German companies in the Serbian economy have exceeded two billion euros, without the latest investments that were launched this summer, and Germany is, in any case, at the very top of the list of foreign investors in terms of the number of projects implemented and their value, and most importantly in terms of the quality of those investments and their contribution to the development of the Serbian economy.

I wouldn’t say that German investors are late in discovering Serbia, rather than their number and the value of their investments in existing and new projects are growing in line with the advancement of the environment for investing and doing business in Serbia, and with the strengthening of Serbian-German political and economic relations. I wouldn’t even be as bold as to rank the countries, primarily because the official statistics on foreign direct investments in monetary terms, according to internationally accepted methodology, are led according to the statistics of commercial banks, and investments are registered according to the country of payment, and not according to the home country of the investor’s parent company.

A lot of companies that have subsidiaries in other countries, especially German ones, finance their projects with money from bank accounts held in those countries, which ensures that, although they are investments by German companies, they are not presented statistically as German.

How could their increased inflow be encouraged, beyond existing subsidy measures?

– In addition to state subsidies, tax and customs breaks, reduced operating costs and various benefits that are offered to investors by local governments, and which together constitute a serious package of financial subsidies, Serbia has appeared before potential investors in recent years with a significantly improved business climate in all segments that investors evaluate.

Our offer includes free trade agreements, a competitive and qualified workforce, and domestic companies that have shown themselves to be capable of engaging in international production and supply chains

Our offer includes free trade agreements, a competitive and qualified workforce, whose qualities are additionally improved through the introduction of dual education, and domestic companies that have shown themselves to be capable of engaging in the production and supply chains of international corporations.

No less important is the fact that businesses intending to invest in Serbia enjoy the maximum support of the Serbian government, relevant state institutions and the Chamber of Commerce and local governments when it comes to making a decision on investing and preparing and implementing that investment.

This was also confirmed by the statement of the owner of company Vorwerk, who stated that nowhere in the world where have they so quickly confirmed a location for their factory as was the case in Serbia, in Čačak, where they launched their investment this summer.

To what extent are German partners participating in the reindustrialisation of Serbia?

– Most German investments have been made in the manufacturing sector, in the processing industry – automotive, electronics, food, pharmaceuticals, chemicals… 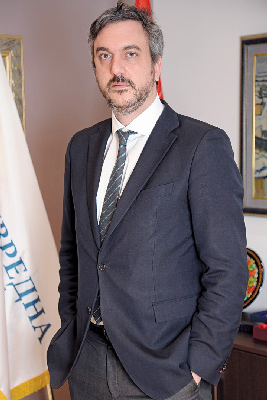 They are especially important for the Serbian economy, not only because of the capital they bring, the opening of export channels, the work they’ve brought to our companies and jobs for our citizens, but also because of the transfer of know-how, technologies, modern business standards and business models that reflect on the domestic economy…They raise the technological level of our economy, contribute to the growth of our production and exports, and change their structure in favour of products with a higher degree of final processing.

Our lists of exports increasingly include products with a higher level of processing: 89 per cent of our exports to the German market are industrial products, while half of them are machinery and transport equipment.

Has Serbia reached the level at which it is able to attract investments in the production of automotive parts with a higher added value compared to existing plants?

– The best example of Serbia’s ability to attract such investments is the decision of German company ZF Friedrichshafen to invest 160 million euros in our country, in a factory in Pančevo for the production of drive systems for electric vehicles. This is one of the world’s largest manufacturers of parts and systems for the automotive industry, a world leader in the use of new technologies and electronic mobility, which – according to data available to us – invests two billion euros annually in research and development, and which plans to produce almost half a million electric engines next year.

At the same time, another good sign is that German companies from the automotive industry that are already present here producing and exporting their goods are not only expanding their existing capacities but also opening their own R&D centres in Serbia, for example, Continental in Novi Sad and Dräxlmaier in Belgrade.

How effective are the joint programme of the German-Serbian Chamber and the CCIS in bringing together German companies and suppliers in Serbia?

– I will mention only a few examples. Thanks to the Supplier Days events organised by the CCIS independently or with partners (the German-Serbian Chamber of Commerce – AHK Serbian, GIZ, the German Association for Managing Materials, Imports and Logistics – BME, NRW International GmbH), last year alone more than 200 Serbian companies had the opportunity to present their production and export potential, and to conduct almost 500 bilateral discussions with dozens of German companies.

Germany’s initiative to find suppliers in the Western Balkans, this year held in Frankfurt under the organisation of AHK, enabled 133 companies from the region, including 31 from Serbia, to discuss future jobs with the representatives of 43 companies from Germany. Previous such events, held in Munich, Dortmund and Belgrade, have resulted in the signing of several dozen contracts.

Our lists of exports increasingly include products with a higher level of processing: 89 per cent of our exports to the German market are industrial products, while half of them are machinery and transport equipment

In addition to this, the CCIS, as a partner in finding suppliers, was also recognised by individual companies from Germany, such as Eberspacher – with which we this year organised, for the third time, supplier days events, and whose supply chain already includes Kragujevac- based companies Teknia KG and Gomma line, as well as other companies that operate here, from Siemens to Metro and Lidl. For example, after last year’s supplier days event that we organised with company Lidl, with the participation of over 50 of our companies, we have remained in constant contact with this retail chain and to date, some 350 Serbian products have secured a place on Lidl’s shelves.

Already in November, ten of our companies – producers of agricultural food products – will be able to talk in Hamburg with members of the association there that brings together around 150 wholesalers, importers of canned and frozen products, dried fruits, nuts, vegetables, honey and its by-products, and spices.

Furthermore, under the organisation of the CCIS, 60 of our companies participated last year and this in six international trade fairs in Germany, establishing more than 3,000 contacts and signing contracts, pre-contracts and deals worth more than two million euros during the course of the fairs themselves. The plan for next year is to secure the participation of the Serbian economy in seven German fairs.

Despite growth in the volume of goods exchanged between Germany and Serbia, we are still recording a significant deficit. What are the chances of improving that balance?

– Germany is the top foreign trade partner of the Serbian economy, both in terms of the exchange of products and services. The volume of the trade exchange last year exceeded four billion euros for the first time, reaching a record level of 4.4 billion euros, which is twice as high as the trade exchange realised between the two countries a decade ago. That growth has also continued into this year.

Starting from 2007, our goods exports to Germany have tripled – reaching a record of 1.9 billion euros in 2017, with significant contributions from German companies that produce in Serbia and which are listed among the biggest exporters in Germany and around the world. It is true that the trade deficit with the large German economy is not small, but today it has halved compared to the maximum of 2008, and we also have a surplus in the exchange of agricultural products and services, which is significant.

Our desire is to ensure that our exchange is as balanced as possible. CCIS analyses highlight significant opportunities to increase sales of products from the furniture, metal, food and IT sectors, in particular, software programming services, as well as increasing the revenues of the construction industry and tourism.

What are your expectations from the introduction of dual education when it comes to improving the quality and availability of the workforce? How many companies are involved in this process?

– Serbia is the first country in the Western Balkans to receive a law on dual education, which will be applied as of the next school year and will contribute to improving the quality and availability of the workforce, and the improved harmonising of education with the requirements of the labour market and the needs of the economy. German investors, as well as those from other countries where the dual education system works successfully, highlighted its advantages and domestic businesspeople accepted and recognised it as a way of providing more functional knowledge and developing the skills of young people during their schooling.

Through the pilot projects that we’re implementing with the support of Germany, Austria and Switzerland, around 600 companies are already involved in educating pupils under the dual education model, opening the doors of their factories for learning through practical work and then hiring those who completed the practical area of their learning with them. With German support, we have so far developed six dual education profiles that are being taught to 62 per cent of pupils, while as many schools and 30 per cent of companies are involved in dual education.