Over the years, NALED has grown into a leading institution in Serbia and the region. Its ability to unite local self-governments, SMEs, and civil society makes it one of the key forces behind Serbia’s reform achievements and makes NALED an important partner for U.S. Government-supported economic growth projects

On the occasion of the tenth anniversary of NALED, we spoke with H.E. Kyle Scott, U.S. Ambassador to Serbia, about the U.S. Government’s track record of cooperation with the Government of Serbia in supporting key reform initiatives through various USAID programmes and NALED’s pioneering model of public-private partnership, which became instrumental in supporting Serbia’s economic growth.

“We know that challenges remain and that businesses are still concerned about complicated and unpredictable administrative and regulatory requirements,” says Ambassador Scott.

He also emphasises NALED’s efforts to create space for collaboration in addressing these constraints, whether through their working bodies or through the Parliamentary Economic Caucus that NALED and the International Republican Institute developed, as the sort of fora Serbia needs to address these challenges.

NALED emerged in 2006 as an initiative in the framework of the USAID MEGA project, and today it has grown into an independent organisation with significant results in the improvement of the business environment in Serbia. How do you see this path of NALED and its contribution to the development of our country, as well as the contribution of the U.S. government to reforms?

NALED has indeed grown into a leading institution in Serbia and the region. Over the past ten years, NALED has pioneered a model of a public-private partnership to support economic growth that has yielded impressive results. NALED’s work in Serbia to track the cost of doing business and suggest ways in which the government could remove administrative obstacles to doing business have been foundational to the Serbian government’s reform efforts.

The values that NALED exemplifies through its work are as important as the successes that NALED has achieved. NALED is committed to including all stakeholders in the reform process, including local self-governments, SMEs and civil society. The U.S. Government recognises these values as being key to Serbia’s efforts to improve the business environment. That is why NALED is an important partner for U.S. Government-supported economic growth projects.

NALED, together with USAID’s Business Enabling Project and USAID’s Sustainable Local Development project, initiated the resolving of a series of systemic problems – para-fiscal charges, a non-transparent regulatory process, delays to the introduction of bylaws, the slow issuance of building permits, a lack of the use of PPP models and many others. To what extent are you satisfied with the results of these projects and how can you motivate the competent institutions to finally resolve some of these problems that have been shown for years?

The U.S. Government has an excellent record of cooperation with the Government of Serbia and other key stakeholders in supporting key reform initiatives.

For example, our work with the Ministry of Finance on para-fiscal charges, or non-tax fees, was grounded in an excellent survey that NALED completed at the outset of USAID’s Business Enabling Programme to determine the impact these changes were having on businesses. We learned that these charges create a huge amount of unpredictability and uncertainty in business operations, which contributes to low levels of investment.

We know that challenges remain. Businesses are still concerned about complicated and unpredictable administrative and regulatory requirements and see them as a constraint to doing business. But NALED’s efforts to create space for collaboration in addressing these constraints, whether through their working bodies or through the Parliamentary Economic Caucus that NALED and the International Republican Institute developed, provide the sort of fora Serbia needs to address these challenges.

An important milestone in the cooperation between NALED and USAID is also a two-year project to strengthen the competitiveness of Serbia. This project has contributed to the Government of Serbia and NALED forming the Coordination Body and Expert Group to combat the grey economy, which together devised the first comprehensive strategy document for solving this problem. Does that represent a milestone in strengthening dialogue and cooperation between the public, private and civil sectors in Serbia?

The adoption of the National Programme for Countering the Grey Economy by the Government of Serbia is an important step forward in tackling one of the most serious constraints on Serbia’s economic growth. USAID’s annual business survey found last year that businesses see the shadow economy was one of the issues that had the most negative impact on their operations.

The road toward economic growth and rising employment opportunities for Serbia’s people is filled with obstacles and opportunities. I hope that we can navigate this path together to ensure a brighter future

By NALED’s estimation, the shadow economy siphons eight million euro from the Serbian budget every day. So we were proud to support NALED’s efforts to take this major issue on, and we have been extremely pleased with the efforts the Government of Serbia has made to address this issue.

The establishment of the Coordination Body and the development of a National Programme for Countering the Grey Economy in less than one year is a remarkable success. The creation of the Fair Competition Alliance by 15 of Serbia’s largest businesses, aimed at assisting the government in defining and implementing concrete measures to address the shadow economy, is also a model that should be considered for future reform efforts.

American investors occasionally complain about complicated administrative procedures in Serbia and the slowness of the administration. Do you also have that impression? What is the prerequisite in order for us to see more U.S. investment?

A more business-friendly environment could help to attract more foreign – and particularly U.S. – investors to Serbia. Once they begin to operate here, U.S. companies generally praise the hard work, dedication, and loyalty of their Serbian staff.  Companies also benefit from Serbia’s location as a country that borders the European Union and that is implementing economic reforms as it moves toward EU membership.

We support these reforms and we are working with the Government of Serbia, with local and municipal governments, with civil society, and with businesses to promote a more transparent business and regulatory environment. We also have programs to support improvements to the rule of law in Serbia, so that businesses and citizens can see faster and more enforceable legal proceedings.

The fight against corruption, which is a significant obstacle for legitimate businesses is one of the key challenges for the Serbian economy, and it must be tackled if Serbia wants increased economic growth and progress towards EU accession

One of the initiatives launched by NALED with U.S. companies is the development of e-government in Serbia. Why is it important to develop e-government as soon as possible?

New technologies bring new opportunities for progress. With e-government, Serbia can benefit from time savings, increased transparency and efficiency, and reduced corruption and paperwork. Ultimately, e-government and electronic services will mean an improvement of the business environment in Serbia and an improvement for individual consumers as well.

You have not been in Belgrade for a long time, but you would certainly have already noticed the major differences in economic development between different local communities in Serbia. In your opinion, how can these differences be systemically mitigated?

There is no simple or easy answer about how to overcome differences in economic development – not in Serbia and not in the United States. 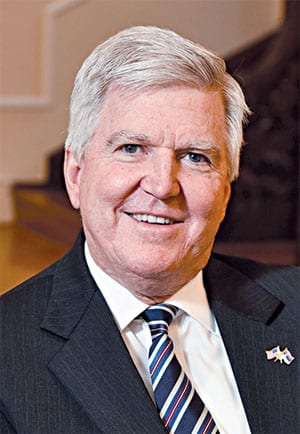 This is a challenge that every country faces.

I see the Government of Serbia undertaking some important changes that can help to narrow the differences in development: fiscal consolidation and structural reforms, investment in infrastructure, and the introduction of e-government. These efforts can help to improve the overall business environment and to connect different parts of Serbia and the region. These are necessary prerequisites for economic growth and for attracting new investments.

I know the Government and NALED are also working with local governments to prepare them for potential investors, to make local administrations more business-friendly, and to ensure necessary licenses can be issued quickly and efficiently. USAID has also worked for nearly 10 years now to support local governments in their efforts to foster economic development in their communities by leveraging their comparative advantages − whether these are natural resources, educational institutions, or their geographic location.

In your opinion, what will be the key challenges for Serbia in the period ahead when it comes to advancing the business environment? What are your recommendations?

I understand that citizens are looking for more jobs, higher-paying positions, and an improved standard of living. People expect that reforms will lead to economic growth.  They want to see improvements and I know they want to see them more quickly. I also know that economic reforms are complex, difficult to implement, sometimes painful, and results are rarely quick.

The Government of Serbia has begun the necessary fiscal and structural reforms that Serbia needs to spur long-term economic growth.  I hope it continues that process despite inevitable difficulties.  The fight against corruption, which is a drag on the economy and a significant obstacle for legitimate businesses and investors, is also not over.  It is one of the key challenges for the Serbian economy, and it must be tackled if Serbia wants increased economic growth and progress towards EU accession.

I believe we share all desire the same result:  economic decisions based on market principles, free of corruption, and strengthened by respect for the rule of law, which will lead to economic growth and rising employment opportunities for Serbia’s people and her youth. The road ahead is filled with obstacles and opportunities. I hope that we can navigate this path together to ensure a brighter future.

The Embassy of the Kingdom of Norway, in cooperation with NALED and the Ministry of State Administration and Local Self-Government, provided masks, gloves, visors...
Read more
Cord MagazineLeaders Meeting Point