Serbia recently underwent a fiscal consolidation process that placed a limit on employment in the public sector, which impacted on the administration’s ability to respond to the growing needs of the private sector. On the other hand, many administrative procedures in Serbia have been shortened, and the construction sector is a good example – says Canadian Ambassador to Serbia Kati Csaba, speaking in this interview for CorD.

Canadian companies have been present in this field in Serbia, among 25 other competing companies. Could you tell us how difficult or easy it is to invest in Serbia?

– The Government of Serbia has been putting significant effort into improving the overall business environment, in order to attract foreign and domestic investors and unlock its economic potential. This was demonstrated by Serbia moving up four positions on the World Bank’s Doing Business list, an excellent result. Data on incoming FDI over the past couple of years also shows how the Serbian market is becoming increasingly attractive.

Canadian mining and exploration companies are well known for their international presence and interest in investing their funds in global projects. Our companies look for markets with effective legislation, predictability, reasonable tax regimes and competitive mining regulations.

Over the past fifteen or so years, a number of Canadian exploration companies have initiated projects across Serbia, which confirms – on the one hand – the increasing attractiveness of Serbia’s mineral resources deposits, and – on the other – the enhanced business environment in the country. The year 2015 marked a significant achievement when, through the joint efforts of the Ministry of Mining and Energy and the local and international mining community, Serbia adopted its new Law on Mining. This legislation provided needed amendments to permitting procedures, defined the new tax regime and contributed to the growing international interest of mining and exploration companies. Vale Canada, the third-largest global base metals company by market capitalisation, recently decided to invest in Serbia, and I am convinced that this is at least partially due to Serbia’s amended legislation.

All of this confirms both the attractiveness of Serbia’s minerals sector, as well as the interest of Canadian companies in this sector based on its mineral potential, enhanced legislation and long history and tradition of mining.

Competing companies in Serbia have come across more or less the same problems as Canadian companies. What is the biggest problem when it comes to implementing a job in our country – slow administration, lengthy waiting times for permits, etc.?

– We all know, and businesspeople will confirm that every industry faces its own challenges. These challenges can include the need for enhanced legislation, strengthened administrative capacities, or more transparent procedures. Challenges can also be related to limited infrastructure or a lack of access to key data. However, we have to be careful not to put all the blame on public administration and to keep in mind the overall economic and social situation of a country.

Serbia is an emerging economy, striving to reach the level of economic development of EU countries. The country has recently gone through a fiscal consolidation process, which, for example, placed limits on public sector employment. That affected the administration’s capacity to respond to the growing demands of the private sector. On the other hand, many administrative procedures in Serbia have been shortened, with the construction sector serving as a good example. Public administration efficiency and investments in infrastructure have improved over the past couple of years, and Canadian companies share that opinion. 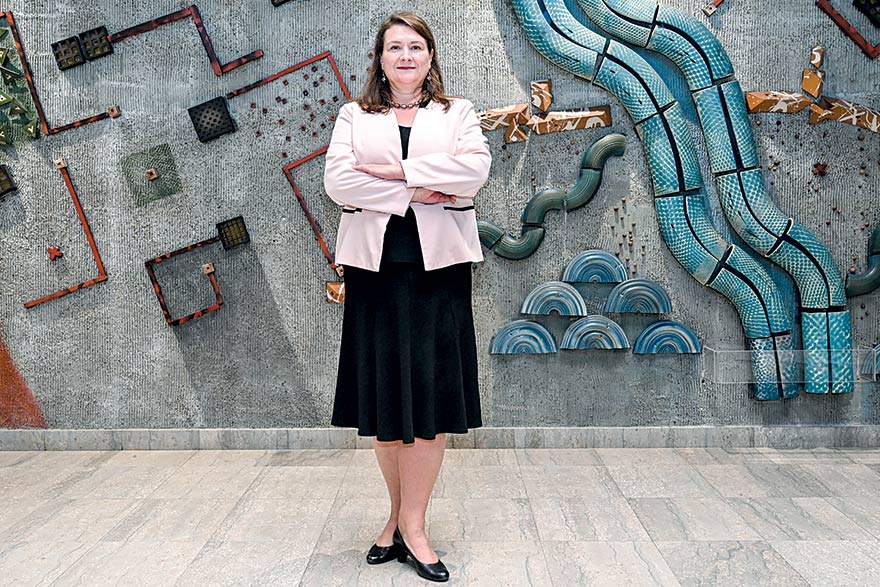 To be honest, while Canada is perceived as a global leader in mining, our country has also recently faced certain challenges in the mining industry. This led the public sector, industry and expert associations in mining in Canada to come together and consider the situation, and resulted in a series of recommendations on how to improve different aspects of mining to bring Canada back to its leading position. Canadians are big believers in dialogue, and we carefully nurture this culture. We are happy to share that experience with the Serbian mining community, as we did in 2015 through our active engagement in the consultation process to draft the new mining law. Our Embassy was very proud of its role in that process and with the results achieved.

Considering that mining is an area in which investments are made over the long term, and returns on investments take even longer to realise, what are the future plans of Canadian companies in Serbia? Will they remain exclusively in the area of mining, or will businesses extend to other areas, and, if so, which?

– The life cycle of a mining project, from exploration and development to closure, is very long and equally complicated. It sometimes takes 20 years and 10,000 drilling holes for a company to develop a mine. This lengthy process includes investments often worth several hundred million dollars out of which 75 per cent remain in the local economy through wages, taxes and fees. I want to emphasise the importance of the mineral exploration phase in the development of any mining project. While exploration is perceived by many as a ‘drilling-only’ period, this phase actually brings strong financial and non-financial benefits to the country and local communities.

It sometimes takes 20 years and 10,000 drilling holes for a company to develop a mine

Canadian mining companies in Serbia are all still in the exploration phase of their projects, with some exciting findings. They are primarily exploring for copper and gold, but also lead, zinc, lithium, silver and boron. Their projects are located in almost every region in Serbia, including Bor, Majdanpek, Raška, Valjevo, Loznica and Bosilegrad.

We are aware that local authorities have a strong interest in witnessing the opening of new mines in Serbia. So do we! However, we have to understand the entire process of exploration and exploitation and possibly separate the two in order to manage expectations. Companies start their exploration work only where they think they have a good chance of success, but there is no guarantee that they will be successful – not every exploration project leads to the opening of a mine! That being said, we are hopeful that the exploration work being done by Canadian companies leads to findings and investment decisions in the future that, in turn, result in the opening of some new mines, that will be of benefit of everyone.

Canadian companies are interested in Serbia as a market, and our Embassy’s trade team receives enquiries every day with regard to possible activities in this market. I am very proud to see companies like Molson Coors, Magna, Bombardier and others being present or showing an interest in Serbia. Our trade colleagues, here at the Embassy and at our ministry in Ottawa, work with many SMEs from Canada and local partners in Serbia to develop stronger economic ties between our two countries, and we hope to see many more companies flying here for business. Maybe even with a direct flight from Toronto one of these days!

Canadian mining companies are also present in North Macedonia. What specifically are they doing there?

– Canadian companies are primarily investing in mineral exploration projects in North Macedonia. However, lately, they have shown interest in the aviation industry, ICT and the car parts industry. The country has recently gone through some painful but necessary processes to unlock its political and economic potential, which we hope will result in positive outcomes for the people of North Macedonia. The largest Canadian mining investment there, Euromax’s exploration in Strumica, is currently on hold due to some administrative issues. We hope to see that resolved soon so that the investment can proceed and bring important economic benefits and jobs to the local community.

The government of Canadian Prime Minister Justin Trudeau introduced a bill that would empower adults to possess 30 grams of marijuana in public. Canada’s proposed...
Read more

Serbia has put in place the Cadastre of Mining Waste, following a project implemented by the Ministry of Mining and Energy, and supported financially...
Read more

On 21 January the Embassy of Canada in Serbia hosted a seminar "Trilateral Dialogue on CSR - Canada's Experience" with the aim of promoting...
Read more

CANSEE Canadian Serbian Business Association, under the auspices of Nevsun Resources, and in cooperation with the Embassy of Canada to Serbia and the Embassy...
Read more

The Global Teacher Prize is a $1 million award presented annually to an exceptional teacher who has made an outstanding contribution to their profession. In...
Read more

The US national holiday, Independence Day, commemorating 4 July 1776, was marked with a traditional reception at the residence of the American ambassador. On...
Read more

The Open Balkan is our autochthonous, organic initiative created by our institutions and seriously supported by all citizens living in our countries; it enables...
Read more