We’ve Got The Wheel Of Development Turning

The government has done everything to encourage construction and make Serbia more attractive for investors. The results are visible, both in terms of the number of issued permits and in the volume of work on big and small private projects

A favourable legislative environment and efficient administration have significantly accelerated the issuance of building permits and are attracting investors who undertake high-end construction. The government does not only focus on the luxury building but also on providing affordable housing for the most vulnerable groups of citizens, says Jovanka Atanacković, Assistant Minister for Construction, Transport and Infrastructure.

To what extent is Serbia today an attractive location for constructing luxury commercial and residential buildings?

The biggest commercial and residential project in Serbia and the region is certainly the Belgrade Waterfront, a joint project of the Serbian Government and the United Arab Emirates. As the Deputy Prime Minister and Minister for Construction, Transport and Infrastructure Zorana Mihajlović reiterates, this government wants to leave a legacy for future generations. This project will be a symbol of our country and a driving force of growth.

The plan is to build over a million square metres of residential buildings, some 750,000 square metres of commercial buildings, nurseries, schools, cultural institutions, green spaces, etc. Other big projects are the construction of Airport City, site of the old Belgrade airport, and the construction of a residential complex where the Federal Ministry of the Interior used to be.

Belgrade Waterfront, a joint project of the Serbian Government and the United Arab Emirates, will be a symbol of our country, a driving force of growth and a legacy for future generations

Some smaller high-end residential and commercial development projects have been completed by private investors in response to market demands. The role of the government is to encourage construction and make Serbia a more attractive destination for investors by cutting waiting times for building permits.

We have adopted a law on planning and construction and introduced the electronic issuance of building permits so that investors now only have to wait about a week for their permits. In some municipalities, permits have been issued in a day or two. On average, though, the shortest waiting times are in Čačak, Vranje and Sombor, where the procedure takes three days.

It is no wonder that since 1st January when the law entered into force, we have been breaking records in the issuance of building permits from one month to the next. For example, 1,377 building permits were issued in September, which is nearly 30 per cent more than in September 2015 and the best result since 2007, when the Statistical Office of the Republic of Serbia started monitoring the data. The projected value of works is six per cent higher. The greatest construction activity was recorded in Belgrade, in September, and then in the South Bačka region.

What are your expectations when it comes to investment in exclusive building construction?

As the standard of living starts rising, the demand for this type of construction will start to increase too. Serbia is on the right track. 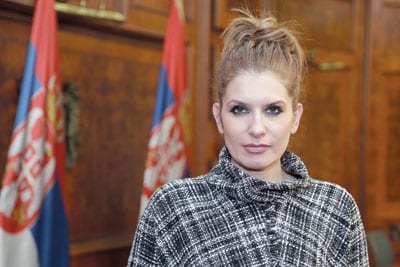 This year our gross domestic product will increase by around three per cent, instead of the projected 1.8 per cent, and it will probably be even higher next year.

The unemployment rate in the third quarter of this year has dropped to 13.8% compared to 24.6% in 2012. These are all indicators of economic recovery, which is the first condition for this type of construction.

However, it should be pointed out that the government does not only focus on this type of construction but also on public housing. We do very much care about our underprivileged citizens.

Does Serbia recognise new standards in construction? How much have foreign investors risen the bar here?

Serbia applies the high standards of construction, some of which are on the same level as those applied in the European Union.

Are Serbian companies ready to comply with those standards?

Judging by the quality of work and furnishings, many properties on the Serbian market conform to EU standards and many of them have been built by Serbian firms. This is the best evidence that there is an increasing number of Serbian companies that comply with the industry’s highest standards.

Are developers in Serbia interested in smart construction and are you considering encouraging it?

Construction companies in Serbia are becoming increasingly aware of a smart building, primarily of how much they can save by using smart systems. One of the first steps in the introduction of smart systems was to improve the long-neglected energy efficiency sector.

However, there has been a lot of interest in this area and a lot has been done. Energy-saving and environmental protection are among the priorities in architecture, especially in residential building. The law on planning and construction prescribes that from now on all new builds will have to have energy passports with information on the energy properties of the building. So far, we have issued 1,275 energy passports.

The Housing and Building Maintenance Bill, which is currently being presented in the Serbian Assembly by Deputy Prime Minister Mihajlović, for the first time sets out energy efficiency as a public interest. This will help us better understand the need to improve this area and housing quality.

To what extent has energy efficiency become a broadly adopted standard?

To the extent that it is not possible to build a new building or restore an old one without it having an energy passport. The law on planning and construction prescribes it. This is the first time that a Serbian law has introduced an institute aimed at improving energy efficiency.

In addition, the Central Register of Energy Passports (CREP) has been established, and we plan to support local governments. The National Typology of Residential Buildings has been completed, defining the structure and typology of buildings and system characteristics to increase efficiency as much as it is currently possible.

The new law has created conditions for the application of energy efficiency measures in construction and introduced a method we can use to calculate how energy efficient a building is. Serbia is meeting its obligations under the agreement with the European Energy Community by training and licencing engineers that specialise in energy efficiency in buildings, issuing decisions on applications for energy passports and producing the National Typology of Residential Buildings (project TABULA).

Of course, in addition to legislation, it is important that we continue to raise awareness of the importance of reducing energy consumption so that our citizens understand that all these measures are in their best interest.

Are you satisfied with how health and safety standards are complied with on building sites?

Compared to the period before the situation is improving but we still cannot be happy with the health and safety situation on construction sites. We can never be completely satisfied with the achieved level of safety because, unfortunately, most injuries and fatalities are caused because health and safety rules are not complied with.

In this respect, in cooperation with the inspectorate responsible for occupational health and safety with the Ministry of Labour, Employment, Veteran and Social Affairs, we will do our best to improve this area further through legislation and more frequent inspections. Since the Ministry of Construction, Transport and Infrastructure understands the gravity of the problem, one of the criteria for getting a construction company on a blacklist or a white list is occupational health and safety.