Over the past six years, the National Bank of Serbia [NBS – Serbia’s central bank], has succeeded in securing and preserving price and financial stability, which has provided a significant contribution to the creation of a more favourable business environment, reduced borrowing costs and the more sustainable acceleration of economic growth. And over the next six years we will continue working to ensure that our results are in the interest of all equally, with the long-term goal of ensuring a better life for citizens

NBS Governor Jorgovanka Tabaković was recently entrusted with a second term at the helm of this institution. For this special edition, we spoke with her about the evolution of priorities in the work of the NBS between her first and second terms heading the country’s central bank, the NBS’s tasks under the auspices of the new arrangement with the International Monetary Fund (IMF) and the further harmonisation of regulations related to the banking domain with European and world standards of doing business.

“If the focus of our work in the first term was primarily on enduringly and painstakingly establishing the stability that had been broken, and then on maintaining that stability, in the second term – alongside preserving stability under conditions of constant challenges, especially from the international environment – our priority will be to move towards all innovations brought by the need to do business in the modern world and the accelerated modernisation process in all fields,” says Governor Tabaković.

In this context, what do you see as the priorities of the central bank within the scope of Serbia’s new arrangement with the IMF?

– The results achieved during the previous arrangement made it possible for the new arrangement to be advisory and non-financial. We have achieved macroeconomic stability that is characterised by low inflation, and a relatively stable dinar exchange rate, as prerequisites for accelerating economic growth on sustainable foundations. We’re aware that lots of work is still ahead of us, primarily on the continuation of structural and institutional reforms, which we will work on together with the Government of Serbia. The NBS will continue implementing activities aimed at strengthening the dinarization process, as well as on further reducing the level of problem loans.

Considering the necessity to accelerate economic growth, and on the basis of the credit activity of banks, can one draw conclusions about the ability of the economy to borrow? 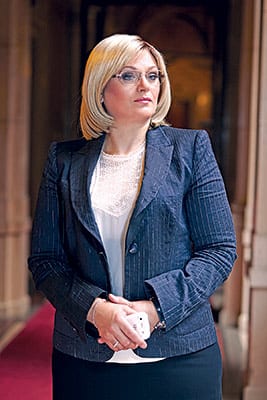 – The monetary policy easing that we commenced in May 2013 has created opportunities for significantly more favourable borrowing, both for citizens and businesses. Since May 2013, the NBS has reduced the reference interest rate by 8.75 percentage points, which has led to significant reductions in interest rates on new dinar loans to businesses by as much as 11.8 p.p. (down to 4.6% in May). This notable decrease in the cost of borrowing in dinars has – along with increased competition between banks and the growth of economic activity – contributed to further growth in lending to businesses.

Year-on-year growth in loans to businesses amounted to 6.3% in May, despite banks having continued to clean their balance sheets of problematic assets. In the NBS survey on credit activity for the first quarter of this year, banks clearly highlighted their expectations of an increase in dinar and foreign currency loans approved for businesses, with the main carriers of that growth identified as small and medium-sized enterprises.

Given that there are constant new warnings about the possibility of a global financial crisis, do you consider the banking sector in Serbia today as being more prepared to withstand any tremors?

– The banking sector is stable, highly liquid and adequately capitalised. The good capital base of banks can also be seen through capital adequacy indicator values of 22.7% at the end of the first quarter of 2018, which is several times higher than the prescribed eight per cent minimum. The liquidity of the banking sector over a longer period of time exceeds the minimum prescribed values by far.

Also supporting the stability of the banking sector are regulatory changes and the introduction of Basel III standards, which contribute to increasing the banking sector’s resilience against unforeseen events and potential crisis situations. The NBS has conducted three months of macro-prudential stress tests, which show that the banking sector’s functioning wouldn’t even be compromised under conditions of extreme growth in credit risk and liquidity risk over the period of a year.

Do you see room for the further improvement of legal solutions and procedures that would reduce the possibility of new problem loans emerging?

– As a result of our systemic approach to solving this problem, we’ve succeeded in reducing the participation of problem loans to the lowest level since monitoring of them began – 7.8% at the end of June. There is certainly room to further improve the legal framework and supervisory practises. We also demonstrated our continuous approach to solving this complex issue after the implementation of all activities included in the Strategy for Solving Problem Loans, with the taking of regulatory steps to encourage banks to more efficiently solve problem loans and establish a system that will reduce the possibility of them emerging.

What are your priorities in the domain of legislation?

– Following the recent adoption of a set of five financial laws that were proposed by the NBS, in the period ahead our legislative initiative will be conditioned by the actual needs of further development of the financial market, along with special care for protecting the interests of the users of financial institutions.

In the NBS survey on credit activity for the first quarter of this year, banks clearly highlighted their expectations of an increase in dinar and foreign currency loans approved for businesses, with the main carriers of that growth identified as SMEs

One of the most dynamic parts of our market relates to payment services and – following the introduction of an instant payment system in October – more intensive work should be expected during the coming year on the adjusting of our regulations to the Open Banking standards that are increasingly present in comparative practises, and which have also begun being applied as of this year in the European Union (PSD2). Moreover, in accordance with the Solvency II Implementation Strategy, work is underway on evaluating the effects and implementing quantitative impact studies in order to subsequently be able to approach and develop appropriate legal solutions. 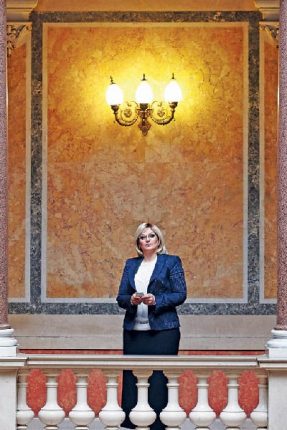 – The NBS coordinates its activities on the improvement of regulations with the Government and the competent ministries, especially when it comes to regulations in the field of foreign exchange operations and advancing the business environment. Inter-institutional cooperation is at a very good level, and the NBS and the regulations under its jurisdiction – in addition to low inflation and financial stability – strive to support the Government’s economic policy, which is also one of our legally defined goals.

It is also vital that the economy – through its associations and representatives, and in an open partnership with the relevant institutions – approaches observations of applicable regulations in a professional and critical way, in order to offer constructive proposals in contributing to their improvement and to avoid the misinterpreting of regulations.

Foreign investors have for years advocated for amendments to the Law on Foreign Exchange Operations in order to enable “cash-pooling”, cross-border intercompany billing and the further regulating of the settling of debts and receivables. In your opinion, has the time come for such legal amendments?

– When considering the development of existing instruments or the introduction of new ones, as well as payment methods for paying abroad, the NBS employs a cautious approach and takes their potential negative effects into consideration. That’s precisely why we’ve worked with the Ministry of Finance to establish gradual phased dynamics of the liberalisation of capital movements, with which we have ensured the stability of the macroeconomic and financial systems.

The NBS will continue implementing activities aimed at strengthening the dinarization process, as well as on further reducing the level of problem loans

With the aim of enabling more favourable operational conditions of the Law on Foreign Exchange Operations, a significant degree of liberalisation of capital flows has been achieved, which is in line with obligations accepted with the concluding of the Stabilisation and Association Agreement with the EU. The further liberalisation of cash-pooling activities will move in parallel with the liberalisation of depositing activities, which will – in accordance with the National Programme for the Adoption of the EU Acquis, adopted by the Government – be implemented no later than the date of our country’s accession to the EU.

When it comes to cross-border intercompany billing, it has been liberalised significantly and the procedure for its implementation has been essentially simplified, while limitations only exist when the member of a company is headquartered in one of the “tax haven” countries.

Considering that digitisation is among the priorities in the Western Balkans, how do you view the tasks of the NBS in this process?

– We monitor current developments in this field and are working actively on projects that support the further digitisation of our society, and in this we are partnering the Government, which has also set digitisation among the top priorities. We’re currently engaged in the establishment of an instant payment system that will enable payments to be made 24 hours a day, seven days a week, 365 days a year, among other things, and via the QR code. Instant payments represent the latest payment method worldwide, and this system will become actual in our country at the end of October this year.

How will the NBS promote financial literacy among citizens in the period ahead?

The announced privatisation of Komercijalna Banka has again prompted the question of banking sector consolidation to emerge among experts and the general public. Contrary...
Read more

Prime Minister Ana Brnabić and the Governor of the National Bank of Serbia (NBS) Jorgovanka Tabaković signed today the “E-Serbia” Protocol on Cooperation in...
Read more

The NBS's IPS system enables the development of new, innovative payment solutions and services that will have an impact on the quality of the...
Read more
Cord MagazineLeaders Meeting Point