As the founding president of the Swiss Finance Plus Technology Association, John Hucker, CFA and Oxford University MBA, works with start-ups and global financial institutions to build a “FinTech Ecosystem”

Exclusively for CorD, John Hucker, President of the Swiss Finance + Technology Association, talks about tech innovations like blockchain and AI, but also challenges and opportunities for the financial industry and a reimagining of it.

What were the initial ideas behind the Swiss Finance + Technology Association?

The reason for creating the Association was that I felt that there was a very important topic to be discussed – and that needed to be explored, which had yet to be done in Switzerland – and that was the future of financial centres.

We have a great history of private banking and banking secrecy, but that came under pressure after the financial crisis, largely due to technology. You could take a CD with all your client’s information, give it to another government and cause a lot of problems. What we proposed is that innovation could become a new value proposition, and so the Association helped us address that topic.

Historically, that was a discussion controlled by banks, but it wasn’t just a topic for the banks – it now included start-ups, investors and other stakeholders who form part of what we call the FinTech ecosystem.

A big part of your job is working with entrepreneurs and start-ups. What are the main differences between operators in the start-up environment and multinational companies like UBS AG, where you worked within wealth management? Are there some similarities?

Start-ups are trying to grow, trying to find clients and become large companies, whereas large companies are much more about maintaining their position or making incremental change. The similarities between the two are that they need good partners in order to be able to connect effectively. It’s not straightforward for a start-up to just turn up and start working with the corporate sector, and in many cases, it’s not straightforward for a corporation to just go ahead and start working with start-ups either.

That’s where we try to play an intermediary role, understanding the two sides and being able to effectively facilitate interactions between them.

One thing that corporates have, especially in the banking industry and in Switzerland, is a very strong understanding of risk management overall, but also the topic of IT security.

From our Swiss perspective, in particular, that’s something that start-ups can really benefit from by appreciating it early on. They obviously need to be able to experiment or to sometimes do things that don’t adhere to the full security level of a big international bank, but if you’re going to work with a bank like Credit Suisse or a major insurance company, you need to have the processes for engaging, and the processes to secure your product at the highest levels.

Blockchain technology is something that nearly every global bank is experimenting with today, and even governments. But what are some of the challenges when it comes to this type of technology? Do you think it’s hype, a truly transformative technology, or something in between?

I think it’s maybe a bit of both, but nothing else. What’s fantastic about blockchain, and bitcoin, in particular, is that it’s got people excited about financial services and innovation again. It’s obviously much broader than that, but if we look back to about ten years ago, people thought of financial services as mortgage-backed securities and the financial collapse. It’s really quite nice that there is something that was born out of that experience with blockchain, which has emerged to challenge and really excite people about the opportunities around technology in finance.

So, that’s my positive spin. On the other side, however, it does face some real challenges. There are two that I always see: one is that the scale of the type of disruption is often almost indigestible; there’s all this hype, all this excitement in the last year that this is going to change everything, but people very quickly realised that you can’t change the world overnight – it’s going to take five years, ten, twenty…; the other is that, much like other great technologies, blockchain might have all this potential, but if it can’t be converted and followed through on that process of really being implemented, it’s just a nice idea.

When I talk to people – whether that was discussion around the World Economic Forum in Switzerland earlier this year or in general – those are some of their main concerns, as well as the falling price of Bitcoin, the maturing ICO regulatory landscape and other real pressures that show this isn’t as easy as writing a code, putting it on the internet and becoming a billionaire.

Having said all that, I’ll return to the main point of how it’s got people excited about innovation because this technology really does offer truly transformative potential to reimagine things in a decentralised technology stack. It’s been a fascinating topic and continues to engage everyone in the discussion.

There is also a lot of buzz around artificial intelligence (AI) and machine learning (ML) – and you have written about their application for financial services. What are some of the main beneficial areas for this, and some of the challenges?

The main opportunity is to make financial services a more efficient business. Finance – the numeric side and numbers involved in finance – is quite vulnerable to disruption from artificial intelligence in so many ways. 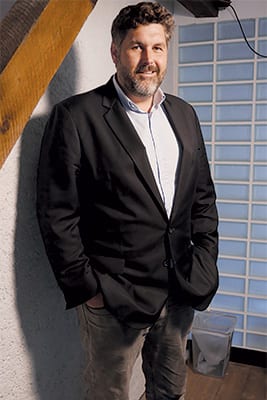 It’s easy to imagine how you can programme all that into a computer, so that’s important to keep in mind. Another area is client support. We hear people talking about chatbots all the time, and there are many good cases of that technology actually being implemented for help desks.

Those are two major areas, but the most exciting area, in my opinion, is the compliance area. My former colleagues at Credit Suisse actually serve as a great example of this. I forget the exact factor, but they have increased the demand for their work in the compliance department by something like a hundredfold in the last five years. In turn, only 10 per cent of the increased workload is handled by human power – over 90% is done through automation and big data technology. This is a perfect example of where new, major demands are placed on the industry and how handling that effectively and efficiently requires the leveraging of technology.

In theory, mathematical models and algorithms should lead to greater fairness, but in practice, they often lead to greater inequality when they’re biased. Do you think this is a challenge, and how do we relate to it – especially in sensitive areas like FinTech and InsurTech?

It’s an excellent point and a very relevant comment. If you’re going to be hardcoding and automating the way things are handled, you really need to ask yourself how things are going and whether you’re making mistakes along the way.

By virtue of the scale and speed with which automation is implemented, by the time you realise a problem is out there it can already have a larger impact than, for example when a human has made an error.

What’s fantastic about blockchain, and bitcoin in particular, is that it has got people excited about financial services and innovation again

When it comes to a solution, first of all, more awareness around these issues is a starting point, but then greater transparency is also needed.

The financial services industry is shrouded in secrecy by its nature, and that sometimes allows things that should be scrutinised to go uninspected. I think this is obviously one of those areas where it’s in the broader interest of society to ask upfront how we’re going to ensure that these automated processes don’t have unintended consequences that would displease us greatly.

It’s really surprising. Sometimes you’re helping people out and it’s a very specific quest that you’re helping people with, but after three years of doing this, and with about 500 or 600 members in the organisation, what’s great is that people are now self-organised, and things happen spontaneously through the power of that ecosystem.

It’s quite rewarding to see how something you’ve created is able to go on creating an impact for people even if you’re not doing it directly yourself. The challenge that goes hand in hand with this is that it takes a lot of work to create a platform like that.

In start-up terms, people call it paying it forward, so there are a lot of extra hours, a lot of favours that I’ve done for people just because that was something I was passionate about, and obviously that adds up and becomes a lot of work. However, it still continues to be very rewarding and, as I said, the platform now creates its own benefits, so it definitely outweighs the negatives.