Sweden supports a number of initiatives in the area of reform of the judiciary and the fight against corruption, which is important for the prosperity of Serbia and the region. They complement other projects supported by Nordic cooperation

Nordic Day is a manifestation of Nordic interstate and inter-parliamentary cooperation, which is one of the oldest and most complex models of regional cooperation in the world. We spoke with H.E. Jan Lundin, Ambassador of Sweden to Serbia, about possible parallels and inspiration relevant to the Western Balkan region.

Which dimension of Nordic cooperation would you single out as the most relevant for the Western Balkan region?

– I believe the Nordic experience is interesting since there was a time when our relations were quite difficult. Nordic cooperation has remedied that. Two things come to mind: first, Nordic countries have made great efforts to facilitate life and work in neighbouring Nordic countries for their citizens, including issues such as school access and social security system access for neighbours from other Nordic countries. Only lately has the EU introduced similar solutions, and the “mini Schengen” initiative by Serbia, North Macedonia and Albania should be welcomed in this context; second, Nordic Ministers meet quite regularly, except the foreign ministers. The point made is that our relations should be closer than “foreign” relations, and should focus on everyday societal issues addressed by other ministers in each government. Maybe here there are things that might be institutionalised by the Western Balkans?

What are the priorities of Nordic cooperation for 2020 that resonate with your engagement in the region?

– In addition to comments made by my Nordic colleagues, I might like to mention the joint project on sustainable food that’s made possible by a grant from the Nordic Council of Ministers, and which will start in the Loznica region in September, addressing sustainability with regard to school meals. We are also preparing some kind of event together with the Nordic Business Alliance in the autumn, at which we will probably present the Nordic Innovation Policy in a specific field.

The state of media freedom is still rated the best in Norway, Finland and Sweden. What can we learn from you? Where can we start untangling the situation we have today?

– Transparency and the protection of journalists are extremely important in this regard. I believe the institutions and rules for this largely exist in Serbia today, but it takes time to build a culture in which critical and investigative journalism is not only allowed, but encouraged. Sweden shall certainly continue cooperation with Serbia in this regard, through support to organisations such as CRTA, KRIK etc., but also to Serbian authorities wherever that may help.

How has the progress on reforms achieved by Serbia over the years impacted on economic cooperation between our two countries?

– Here perhaps we can start by assessing Serbia’s progress with reforms. Yes, certain progress has been achieved. However, when it comes to business and the economic environment, there’s still much that can and should be done. The reform of the judiciary still has some way to go, and corruption still remains one of the major impediments to fair and transparent business cooperation.

Sweden supports a number of initiatives in this area through its development cooperation with Serbia, in order to help with the reform process. 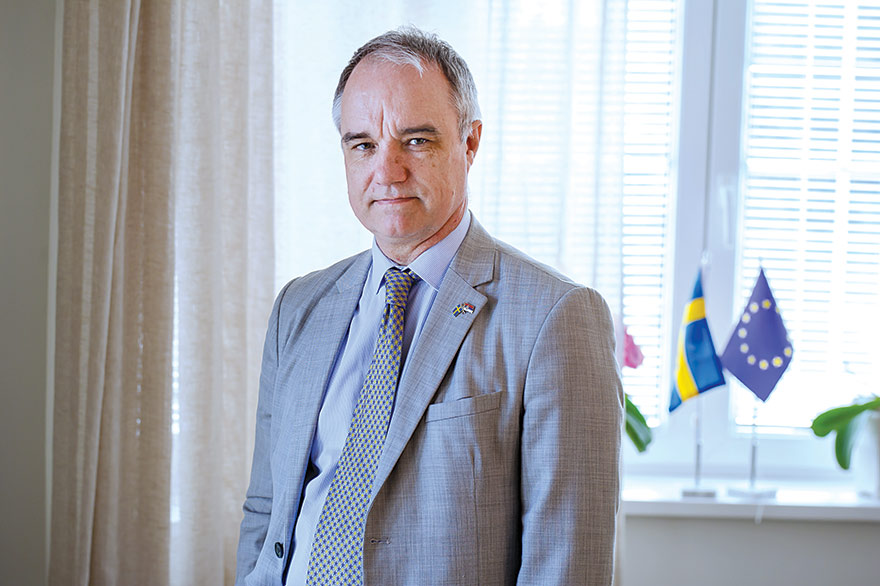 Economic cooperation between the two countries is steadily increasing, although it started from a low base. We don’t yet have the final figures for 2019, but in 2018 overall trade was 322 million euros, which was a considerable increase in 2017, when it was 287 million. Over a hundred Swedish companies are doing business in Serbia, many of them with mixed Swedish and Serbian capital.

The role of the Serbian diaspora in Sweden could be seen as significant when it comes to investment in Serbia. The arrival of IKEA and its plans to invest another 50 million euros during this year and next in the development of a retail park next to their store, which opened in 2017, is an important segment of the economic cooperation between our two countries. Companies such as Tetra Pak, Ericsson, Securitas and Transcom are all here. We could mention some of the most recent investments, such as the arrival of Rimaster in Paraćin and NIBE Industier AB’s acquisition of the Gorenje TIKI hot water tank production plant in Stara Pazova. There are many more companies across various sectors that are facilitating the flow of business and trade cooperation between our two countries, and we hope that this will continue to expand.

Nordic countries are said to be among the regions that will be strongly hit by climate change, which also applies to our region. What can we learn from your example in fighting climate change, pollution and biodiversity loss?

– I believe each country has its own specific situation, and one cannot always apply solutions in other countries. Sweden is preparing for a future “beyond” fossil fuels. Energy production is largely fossil-free thanks to our fortunate position, with plenty of hydropower and renewable energy, complemented by nuclear power at least for a few decades more.

The “mini Schengen” initiative of Serbia, North Macedonia and Albania should be welcomed as an enterprise that resembles the Nordic approach to cooperation

Transport is the big challenge, but also here a gradual transfer to non-fossil fuel is happening, and in a few years, Volvo will probably no longer produce fossil-fuel based cars. Serbia is blessed with the world’s greatest deposits of lithium, which are used in making batteries. I believe this will be a great asset if used strategically when departing from fossil fuels, in for example energy production, which is a necessity implied in the recent “Green Deal” initiative launched by the European Union.

The Serbian public recently had the opportunity to see an exhibition devoted to Raoul Wallenberg, a Swedish diplomat, businessman and humanist. Which events would you recommend to the Serbian public in the weeks and months ahead?

– The exhibition about Raoul Wallenberg, entitled “To me, there’s no other choice”, has been shown in six cities in Serbia to date and has been at the core of many workshops about values and civil courage with young people. Being Sweden’s special envoy in Budapest between July and December 1944, Wallenberg issued security passports and protected Jews in buildings designated as Swedish territory, thereby saving thousands of lives. Our project partner, the Centre for Developing Children’s Right to Culture – C31, has done a tremendous job in involving young people in primary and secondary schools in Bečej, Zrenjanin, Šabac, Kragujevac, Belgrade and Smederevo in values-based dialogues highlighting that everybody is a hero and can make a change. The exhibition will conclude its tour in Smederevo on 20th February.

For us, activities of this type are very important, as the Swedish Government will hold a conference in Malmö on 26th–27th October 2020 aimed at combating anti-Semitism and passing on the memory of the Holocaust. Just recently, I handed over an invitation from Swedish Prime Minister Löfvén to President Vučić to take part in the conference.

I also think the Serbian public might be interested in a series of public dialogues called “Serbia 2030 – what is our path?”, organised jointly by Nova Ekonomija, Vreme, Danas, Beta, Fonet, Juzne vesti and TV N1, and supported by Sweden within its Drive for Democracy programme. These public dialogues will be held once a month until June, and topics have been chosen that are considered as being of great importance to Serbia’s future.

Nordic countries are a group of countries in Northern Europe. These countries include Denmark, Finland, Iceland, Sweden, Norway, and the territories of the Aland...
Read more

The Cookathon Culinary Marathon was held as the closing event of the three-year Food for Tomorrow project of the Swedish Institute and the Embassy...
Read more

Sweden's Riksbank has repeatedly raised the idea of 'e-krona' or digital currency in recent years, but last month reiterated that a project launched in...
Read more

Nordic Days 2016 was organised in Sarajevo, Bosnia & Herzegovina, 19-21 May, by the Embassies of Denmark, Norway, Sweden and Finland. "It is our great...
Read more

The Norwegian Ambassadorial Residence in Belgrade hosted the conference Nordic Innovative Business in Serbia, which was co-organised by the Nordic Business Alliance and the...
Read more