Dance has always been the best kept secret for liberation. By liberating the body, the magic of dance permeates and opens room for debate on important issues, thereby pushing back certain borders within society. This is exactly what Netherlands-based international dance company Club Guy & Roni, led by Israeli artist Guy Weizman, has been doing since it was founded in 2002

Already known to Serbian audiences for its previous performances with BITEF and at the Serbian National Theatre in Novi Sad and the Belgrade Dance Festival, this company brought its magic back to Belgrade for the major celebration of BITEF’s Birthday on 4th March, with the premiere of its show “L’histoire du soldat” – The Soldier’s Tale. In this interview for What’s Up before the premiere performance, which was supported by Airport City Belgrade, Weizman spoke about freedom, identity, happiness, support and pervading dance.

How does it feel to be back in Belgrade?

It feels like coming home. I think Belgrade is the only city in Europe that reminds me somehow of Tel Aviv. I don’t really know why… is it the link of mentality, culture, flavours, noise and a healthy amount of anarchy? In any case, it’s some kind of interaction and something that has come out of the clash of cultures, the combination of East and West. Yugoslav culture is fascinating, and you are hospitable people like us [Israelis]. There is also this constant fight for your pride, though I’m not sure how good that is (laughs), and there is generosity and friendship.

I think Belgrade is Europe’s best-kept secret. The West does not have all this in one place, and this is probably the westernmost point at which the East has arrived.

What about the Netherlands, where you live?

It’s beautiful, but it doesn’t have that something. People are trying to determine what is the new Europe and the new identity. The integration process and the clash of East and West have been underway there, but it’s something that is quite new and has yet to yield results. This interweaving here has been going on for a very long time, 500 years, and it has brought great results.

This time you are coming to Belgrade with L’histoire du Soldat. You had a few versions of this libretto, written by famous Dutch Jewish poet Judith Herzberg. What is the final version?

That’s an interesting story. I have been waiting for this piece for a long time. It took me four different versions before we came to this one, and I have been working on it now for about four years. Judith Herzberg, who was hiding in Holland in World War II, wrote a story about a soldier who returns home after hiding for a long time. Her text was very moving from this hiding perspective, but I decided I wanted it to be a little more concrete and modern. I was curious to find out what someone asks when they come back home after years of fighting… Based on that, we started interviewing soldiers who returned from war and this text is a literal transcript of those stories.

There are Serbian dancers in the play (Ana Ignjatović Zagorac, Nataša Gvozdenović, Luka Mihovilović, Vladimir Čubrilo, Nikola Tomašević and Luka Lukić). How important are collaborations with other artists and institutions in the dance world?

They are very important. The nice thing about dance is that it’s language-free, so we can work anywhere with any group. I think it’s very important that we show other young artists through our work/projects what is new in the dance world and I think such exchanges are closing the circle.  Our work here has somewhat changed and inspired artists here to do daring works, and that is important. That is the greatest acknowledgement I could receive.

We tried to use donor money to help young people have a slightly more normal life, enriched with art. So we came up with this project. I noticed that there is significant help and support to artists here that you might not be aware of… I see that here people from the world of business do that, like Airport City, which supported our project… It’s very special when there is a support system for culture from business, which is not the case in Western Europe, where culture is only on the market, left without any support.

I believe that those who support this idea are just as important, if not more important, than the holders of that idea. How many did talented artists not get a chance to implement their ideas due to a lack of adequate support?

Personal liberation is an omnipresent theme in your work. How do you achieve that through dance?

I think you can achieve it quickest with dance because you have to liberate yourself from your body when dancing. 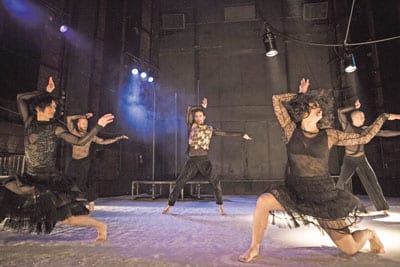 The essence of dancing is doing the impossible with your body — telling a story with muscles and skin and cells, and not with words.

We pick a subject and then try to cross a couple of borders. Before this, we did a project in Holland called Phobia… That one was really about terror and how you perceive the idea of people just blowing themselves up. What we are trying to do is really understand how one comes to the point at which one has such belief that they are willing to destroy everything around them. After being so intensely busy with something like this for so long, you stand on the other side of fear. You are not the same man and, in a way, this is how we deal with it.

Your company is also engaged in humanitarian work…

As an artist, you have a duty to tell people something that is significant to their daily life. I’m not a preacher and cannot change their life, but I can perhaps push this huge rock a little bit, and eventually, it will start rolling. The encouraging debate is very important in our work, and whenever we have a performance addressing actual things, we also make sure that we bring together philosophers, doctors, scientists and artists from other disciplines and make sure that discussion begins. There is a lot to do in this world. Cancer research is also something I find important, and we try to use this stage not only to make ourselves bigger but also to try to convince other people to try to do good things.

You have received several prestigious awards. How important is that for your work?

They are really good for PR, but they don’t really change anything in real life. It’s beautiful to be acknowledged for what you do, and it’s flattering, but we are not doing this for awards.

Could you reveal some of your upcoming projects?

After making Phobia, which was a very dark piece, the next project is called Happiness. It’s a little bit about the “I want it all / I want it now” mentality and the culture in which the number of likes you get defines your happiness… With kids saying they want to be famous when they grow up. The question is whether that is really happiness or not. Another next big thing for me is taking over this big theatre company in the north in The Netherlands. The idea is that from that moment, we are going to make interdisciplinary projects. It’s kind of a big step, but it’s exciting and something I’m looking forward to.