Goran Knežević, Economy Minister Of The Republic Of Serbia

We’ll Continue Along The Road Of Reform

The Government of Serbia and the Ministry of Economy will continue to work on improving the business environment and the climate for doing business, with the aim of creating a more efficient, more prospective, attractive and competitive economy, and equal treatment on the European Union market

The Serbian government has proved successful at promoting investment. Alongside subsidies, this also implies the improvement of the business climate and the environment for doing business, while investment in infrastructure is essential for the start of any serious investment, says Goran Knežević, Economy Minister of the Republic of Serbia. Minister Knežević expects around two billion euros to be invested in Serbia by the end of the year, but he emphasises that it is much more important than this financial indicator that Serbia has attracted important world brands in this way, that it succeeds in gaining access to modern technologies and modern ways of doing business, and that more jobs than originally estimated have been created.

Our interlocutor also highlights the government’s commitment to the domestic sector of the economy, primarily to small and medium-sized enterprises, for which support lasting ten years has been secured.

We spoke with Minister Knežević about some of the most current topics in the field of his ministry’s work, such as new legislative proposals, the continuation of investments in local governments in which investors have the greatest interest in investing, as well as the financial and non-financial support of the government in creating a reliable network of suppliers that large companies will be able to rely on. We also spoke about the continuation of reform processes, primarily in the area of privatisation and improving management in public enterprises.

How would you estimate the economy’s functioning to date and what are your expectations until the end of 2017?

– Our economy is showing signs of recovery. In the first six months of this year, compared to the same period last year, growth in total industrial production was recorded at 2.1%, with the growth of 6.3% in the processing industry, while unemployment also declined and the number of enterprises increased. All this points to better conditions for doing business and a better business climate.

What level of investment do you expect in 2017, in which sectors, and with the creation of how many new jobs? What further investment incentives are you planning?

– Our goal is to reach two billion euros of foreign direct investments this year. The investment incentives we offer both domestic and foreign investors have proven to be efficient, because not only have these measures brought world-famous brands to this country, they have also brought with them the latest technologies and knowledge but also hired far more workers than we agreed contractually.

If you look only at the 72 companies that came out of control of the Ministry of Economy, i.e. those which fulfilled all their obligations towards the state, there is sufficient proof of the success of the incentive policy. They were supposed to hire around 12,400 workers, but today they employ almost 40,000 people, which is 27,500 more than agreed!

But new investments are not only secured by incentives. We strive to make Serbia more attractive for investments in other ways. We invest in industrial zones, utilities, energy infrastructure, roads and other things that are important to investors when they are considering investing.

Last year we invested 2.5 billion dinars in industrial zones, utilities, energy infrastructure, roads and other things that are important to investors when they are considering investing

For this purpose, we invested about 2.5 billion dinars last year, especially considering the interest of investors in individual zones. This year we are also continuing to co-finance works on the construction and renovation of roads, utilities, energy and other infrastructure, as well as works that ensure the availability of business zones and their connection with the environment in 26 cities and municipalities.

We also support the sector of small and medium-sized enterprises, without which no large company would be able to function. We want to create a reliable network of suppliers and that’s why the state strongly supports this sector with concrete financial and non-financial support. I believe that our SMEs have never been stronger, and I am confident they will be even stronger, as we have ensured continuity in this support over the next ten years.

How will the losses of companies under bankruptcy and liquidation procedures be dealt with?

– In Serbia, as elsewhere in the world, there is a system, and this is the bankruptcy procedure, through which a company that has fallen into difficulties can settle obligations towards its creditors and repay its debts. 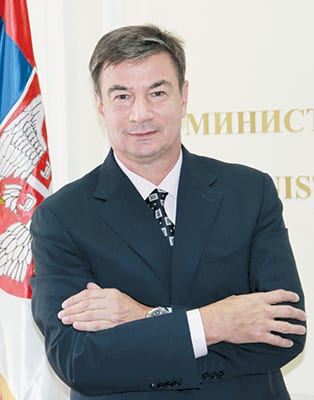 We have further enhanced this system, which is otherwise assessed as good, and recently the Government adopted the Draft Law on Amendments to the Bankruptcy Law, which further improves mechanisms that contribute to the discontinuation of the “vicious circle of debt” between companies and enable their more liquid operations.

We protect the position and protection of creditors – workers, other companies, the state. In addition to this, preventative mechanisms have also been established, such as consensual financial restructuring, which is completely voluntary, the out-of-court model for resolving debt issues through the redefining of debt-trust relations between companies in financial difficulties and its creditors (banks, suppliers etc.).

With this, we additionally advance the business environment in such a way that it is certain and safe for operations, which is also the obligation of the state, and not to interfere in operations and repay the debts of failed companies.

Has EPS really become a big problem for the Serbian economy; what are the solutions?

– Although we are awaited by the most important steps in the reform of public companies with the introduction of corporate governance, we have to be realistic and say that, views as a whole, it operates better. Compared to the period two and a half years ago, when they had losses of more than 65 million dinars, preliminary results from the end of 2016 show that they were operating with profits exceeding eight billion dinars.

I’m sure that public companies can operate well, and that is also proven by their business results because there are political will and determination in the Government of Serbia to reform it.

At what stage are the privatisation processes of large enterprises?

– When it comes to companies that are in the process of privatisation, regardless of how much it is a recurrence of the past or a major problem that nobody has dealt with seriously in the past and whose solution has been permanently postponed for the purposes of political gains and social peace, and no matter how resolved we are to bring this story to an end, because that is in the interest of our economy, we must bear in mind that our citizens work in them.

The incentives we offer investors have proven efficient, because we gained worldfamous brands, the latest technologies and knowhow, but also far more workers were hired than we agreed contractually

That’s why we fight for each of them. We are looking for buyers and partners who will secure the future of these companies, such as Hestil (Hibis) did for the Smederevo steelworks.

Perhaps some of these stories will not have a happy ending, and we must tell people that openly, but that’s why we are also strengthening the private sector, in order for it to be able to accept people who are left jobless in these processes.

What does the government’s focus on digitisation means when it comes to the sector of the economy and the Ministry of Economy?

– Modern technologies and digitisation are crucial to the competitiveness of our economy. The Prime Minister is completely right when she places an emphasis on digitisation, because in conditions when science changes the world every day, we must primarily keep pace technologically with the modern world, and then maintain that tempo.

What is envisaged by amendments to the Law on Companies and in relation to the protection of small shareholders?

– By amending the Law on Companies we create conditions for doing business that will ensure companies have complete legal security, easier operations, a shortening of the registration procedure, increasing the efficiency of the administration, strengthening financial discipline and significantly increasing the transparency of operations, which all together will result in a more efficient, more prospective, more attractive and more competitive economy, and ensure equal treatment on the market of the European Union. Securing all of this is especially important for joining the EU, and I would add that it is important to us because of ourselves, because a regulated state is our ultimate goal.