Greece has a sincere strategy to support the creation of a peaceful and prosperous environment in the Balkans. The country’s Nea Demokratia party envisages a series of structural changes in Greece’s foreign policy mechanism in order to realise its role. It also recognises Serbia as a forerunner of the region in the EU integration process

Greece has a pivotal role in supporting the EU integration process in the Balkans, for its own sake and for the sake of the region. The success of this endeavour takes two sides – and that means the EU’s willingness to clearly support the process, and the Balkan countries’ eagerness to adhere to the highest standards of human rights, freedom of speech, the rule of law and other EU standards, says George Koumoutsakos, Member of the Hellenic Parliament and Nea Demokratia’s Shadow Minister of Foreign Affairs.

How has the harsh austerity programme that Greece must soon leave behind impacted on the country’s position in the international arena?

– Despite the economic crisis, our country retains significant political and economic influence internationally, but even more so on the Balkan peninsula. In economic terms, Greece’s economy remains perhaps the most important in the Balkans, while the country is one of the region’s largest investors. As a member of both the EU and NATO, Greece plays a key role in promoting peace and stability. It has a unique geopolitical role that it must use to capitalise on the international momentum generated, not only for the sake of our national interest but also for the prosperity of the region. Nea Demokratia has planned a series of structural changes in the foreign policy mechanism in order to accomplish this role, such as the formation of a national security council, policies for more effective public diplomacy and improvement in the quality of economic diplomacy.

European integration must become the catalyst for a solution, and not for the perpetuation of problems in the Balkans

How do you think Brexit will unfold; what could the repercussions be for the EU and the UK; and how might it impact on Greece?

– Brexit will have an impact on every European country, but mainly on Britain. Recent developments send a strong signal to those who believed it would be easy and profitable to leave the European family. It is a signal that I am sure European citizens will take into consideration during the forthcoming European Parliament elections.

What are the most pressing issues related to foreign relations that Greece must address, and how should they be addressed? 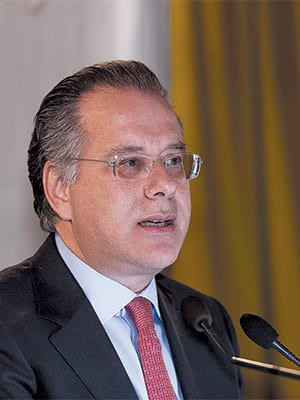 – Relations with Turkey is a “traditional” priority of Greek diplomacy. But the new geopolitical environment being formed in recent times provides with new challenges and new opportunities that we must explore and address. During recent years we’ve witnessed Turkey diverging from the West, particularly with regard to its relations with the European Union and the United States.

In the meantime, a series of Turkish statements and actions have deliberately ignored fundamental rules of international law and the UN Treaty on the Law of the Sea, reflecting Ankara’s revisionist logic in the Aegean and eastern Mediterranean seas. Ankara should not think that it can create conditions that impose any kind of forced negotiation on Greece by raising tensions.

You have criticised the Prespa Agreement, despite many in the EU see it as a breakthrough advancement that could earn its signatories the Nobel Peace Prize. Do you maintain your previous stance and, if so, why?

– Nea Demokratia has clearly underlined the very important weak points of this agreement. This doesn’t change. We are actually seeing these problems arising even earlier, but now the Agreement has been ratified by the Greek Parliament. Kyriakos Mitsotakis pointed out that the next government will take every possible measure to protect our national interests with respect to international law.

Nea Demokratia has clearly underlined the weak points of the Prespa Agreement. The next government will take every possible measure to protect our national interests with respect to international law

How would you comment on the ongoing stalemate in the dialogue between Belgrade and Priština? 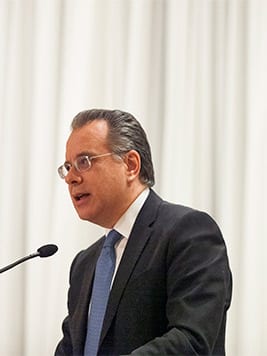 – Greece has a clear position regarding this issue. We support the Belgrade-Priština political dialogue; we believe that a possible agreement will be a step towards normalising relations between Serbia and Kosovo. In the case that the two parties reach an agreement, we will support this mutually agreed solution. In the meantime, our position will remain the same regarding the issue of recognition.

Greece has a sincere strategy to support the creation of a peaceful and prosperous environment in the Balkans, the preconditions of which are respect for human rights, fundamental freedoms and international law and, of course, the principle of good neighbourly relations.

I additionally believe that the integration process of the Western Balkan countries must advance. The stabilisation of the region is also in Greece’s interest, but European integration must become the catalyst for a solution, and not for the perpetuation of problems. And, of course, Serbia is the front runner in the enlargement process.

How would you assess the level of relation between Serbia and Greece; which issues should be in the focus of our bilateral relations?

– I had the opportunity to visit Serbia recently, and to confirm traditionally good and productive relations. But there are always ways to improve. I believe that the High-Level Cooperation Council provides opportunities that we have to capitalise on in a more effective way, to practically enhance our cooperation, especially in the fields of transportation and energy networks, and to increase trade operations. These are tangible targets that we can meet for the sake of our mutual interests.

Stylianos Zakof, President Of The Hellenic Business Association Of Serbia

We Can Do Better & More

Our experience so far, and our potential, both corroborate expectations that Hellenic Sugar Serbia will become the leader of both Serbia and the region....
Read more

15 Years Of Super Vero In Serbia

Ever since building of business in Serbia started in 2002, Veropoulos Company has shown great commitment to its loyal customers, employees and environment, becoming...
Read more

The Embassy of Greece in Belgrade, in cooperation with the Chamber of Commerce & Industry of Serbia (PKS) and Greek development agency “Enterprise Greece”,...
Read more

Now that the Greek economy is recovering strongly and there is rising interest in cooperating with Serbia, we believe strongly that the time is...
Read more

Representatives of the members of the Hellenic Business Association of Serbia elected a new Board of Directors (BoD) at the General Assembly held in...
Read more

The Hellenic Business Association (HBA) organised its traditional Christmas dinner to celebrate the end of successful 2017 with its member companies, associates and friends. The celebration,...
Read more

We mustn't lose what we've already achieved, and that's full employment and economic growth. Even though much of this doesn't depend on us, we...
Read more

I’m extremely proud of the results we’ve achieved in preserving the exchange rate’s relative stability over the course of the last decade. That has...
Read more

Open Balkan Is Both Our Chance And Obligation

When it comes to the Government of Serbia, there is no capitulating on the implementing of infrastructure projects, as they represent the foundation of...
Read more