With more than 3.5 billion search queries every day, as well as more than 1.17 billion different people who use Google to search at least once a month, the world’s biggest search engine provides more than 2.3 million answers every second.

Each of these answers should be fast, relevant and useful, while the ways we ask questions has changed continuously – as we moved from desktop to mobile, and as we move from typing to voice search. That’s why Google is evolving continually in line with the new ways we search for information, as well as shaping that knowledge.

This September will see Google.com celebrate its 20th birthday.

It was in 1996 that its founders, Larry Page and Sergey Brin, met at Stanford and came up with the concept for a search engine that they wanted to name BackRub. A year later, in 1997, the search engine received the domain and name that we use today, with Milton Sirotta coming up with the name Google, derived from a googol – the number 1 followed by 100 zeros.

At the age of twenty, the world’s biggest search engine is massive: it has more than 60 trillion indexed web pages, more than two billion lines of code for its internet services and over two trillion searches annually. When you add to the equation Gmail, Google Maps, Google Assistant, Android, self-driving cars and many other projects, it’s safe to say that Google has shaped the internet and the world in which we live. 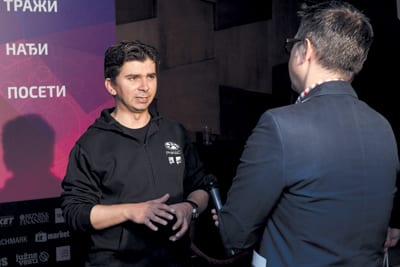 With such a huge impact come a lot of responsibilities and also challenges. The days of dial-up modems may seem like ancient history today, but the internet and the ways we search and interact with our devices may change drastically again in just a few years. With Machine Learning and Artificial Intelligence, who could even dare to guess how the situation will look in future? As of today, 25% of Google search results contain knowledge graph answers or a box.

This feature was launched just five years ago to enhance search results with semantic-search information gathered from different sources. The desktop is slowly becoming a thing of the past, with mobile searches having officially overtaken desktop searches, now accounting for more than 50% of total Google searches worldwide. Moreover, some 20% of mobile searches are now voice command searches, and they are definitely here to stay.

To help shed some light on the different challenges and trends of such a vast topic (or rather, topics), I had the honour of talking with Google Webmaster Trends Analyst Gary Illyes, who was a keynote speaker at this year’s DIDS conference in Belgrade. Gary works hard to improve the search experience by helping webmasters build better websites, crunching the big (big, big) data that Google possesses to create a more meaningful picture that site owners can act upon.

What are some of the challenges of global and local search experience – ranking sites in different countries and different languages?

– The challenge of ranking locally is pretty much the same as ranking globally, but at a smaller scale: competition in most topics is fierce, and competitors are many, so content creators will have to work hard to create the best possible content and also to raise awareness of their content.

The one different thing is that you’re targeting local users, and you only want to earn their trust, not the whole world’s. Besides the traditional techniques to achieve this, businesses have a couple of extra options, namely using a local TLD – like .rs in Serbia’s case – which will help a bit with ranking locally and also with earning users’ trust, and to write in a language that users understand.

Sometimes it took minutes to load CNN, for example. Nowadays if a website loads in more than just a couple of seconds, users get frustrated. I think that’s one of the biggest changes that happened

What’s your first memory of the internet, and is it sometimes surprising how fast everything has changed?

– My first memory of the internet is the noise that dial-up modems used to make! After a few days of trying to connect to the internet, I learned most of the beeps and whistles the modem made while negotiating the connections and based on those sounds I could tell when something was going wrong. It was fascinating and utterly slow, sometimes taking minutes to connect to the internet, and then the connection speeds were also ridiculous. Sometimes it took minutes to load CNN, for example. Nowadays if a website loads in more than just a couple of seconds, users get frustrated. I think that’s one of the biggest changes that happened.

I find it fascinating that an algorithm that was created almost two decades ago is still an integral and important part of a system that’s serving billions of queries.

In what direction do you think the internet and searches will advance? Are voice searches, machine learning and artificial intelligence already more of a reality and trend than the (distant) future? And what could come next?

– I will leave long term predictions to Nostradamus, but voice search is here to stay, and it shows a growing trend. People talk to their devices more readily and ask well-phrased questions instead of just keywords. To understand these questions, machine learning (ML) is of course very helpful; ML is great at finding patterns, often much better than humans, but it’s still just a tool that’s used to perform specific tasks. We’re still far from something that could do everything humans do.

Panda, Penguin… what is your favourite algorithm or signal?

– My favourite algorithm, which we still use after 18 years, is of course PageRank. I find it fascinating that an algorithm that was created almost two decades ago is still an integral and important part of a system that’s serving billions of queries.

What are some of the main areas of focus on improving the search and browsing experience when it comes to website owners and webmasters? Should they, for instance, focus on AMP, https/https2, all of it, or something else?

In my opinion, content creators and website owners should pick one thing that they think is important for their users and implement that. They know better what is important and what they have resources for. We can give them guidance on what things can be improved, but ultimately it’s up to them to make a final decision.

Interestingly, the percentage of humans vs bots when it comes to the internet is somewhere around 30 to 70. Are all those bots a problem for Google and its users, and is it realistic that our search experience could be influenced by that type of AI (and how do we prevent it)?

– We are working hard not to let bots interfere with our systems.

It’s extremely hard to find the right balance between transparency and not exposing our systems to abuse, but we’re working hard to push the limits towards being more transparent. We believe that website owners can create better websites for both users and search engines the more transparent we are

With billions of users worldwide, as well as over three billion daily search queries, Google has a lot of responsibility. How difficult is it to find a balance between being transparent, which is very important, and not compromising your own operations?

– It’s extremely hard to find the right balance between transparency and not exposing our systems to abuse, but we’re working hard to push the limits towards being more transparent. We believe that website owners can create better websites for both users and search engines, the more transparent we are. For example, a couple of years ago, we announced that mobile-friendliness would become a ranking signal, and we communicated every detail of this change.

Besides your work at Google, you are famous for trolling people a bit on Twitter. Do you have any favourite anecdotes or Twitter situations?

– I don’t really have anecdotes from my Twitter endeavours, at least not ones that I recall, but recently I started tweeting short “Did You Know?” tweets, which are nuggets of information about the search that are bouncing around inside my head. They’re typically unrelated to anything that happened that day; they’re pretty random, but people seem to love them.

Virtual reality is a major trend, but also a new field. Can you imagine the virtual reality search experience of the future and is that something Google would find interesting to work on?

– This is a super interesting question, but unfortunately, I have no clue how Virtual Reality (VR) will shape search. Obviously, we have many extremely smart people working on our search experience, and I’m sure they’re going to come up with something amazing!