Frank Baumann, Director Of The Goethe-Institut In Serbia

Although he has only been the director of the Goethe-Institut in Belgrade since March, Frank Baumann notes that the Serbian language, Serbia and our culture have been close to him for 12 years, because his wife is a Serb and their three children know our language

Frank Baumann was appointed to head Germany’s cultural centre, the Goethe-Institut, in Serbia after having served the same function in Belarus, and prior to that Russia. We spoke in the Knez Mihailova Street premises of the Goethe-Institut, which were renovated last year.

Like in any other country, the mission of the Goethe-Institut in Serbia is to relay the cultural, social and political image of the Federal Republic of Germany. How in particular do you accomplish this task?

Apart from Serbia, the Goethe-Institut in Belgrade is also responsible for Montenegro. Why?

– The easiest way for me to explain it to you is with the help of history. On the territory of the former Yugoslavia, Goethe institutes were established in Belgrade and Zagreb, with Belgrade being founded earlier so that in three years we will celebrate half a century of the Goethe-Institut in Belgrade.

After the collapse of the country, a need arose for institutes in the new countries, so they were opened in Ljubljana, Sarajevo and Skopje. That’s also why we cooperate with Montenegro. As an administrative chief interlocutor, we usually have the embassy of Germany in Podgorica, with which we implement various programmes, but we also have contacts with institutions with which we have established cooperation, such as the Museum of Contemporary Art in Cetinje, or with the associates with whom we implement the German Days event in Podgorica.

How much does the Goethe-Institut mission depend on international relations between Serbia and Germany?

We are simultaneously dependent on and independent of interstate relations. 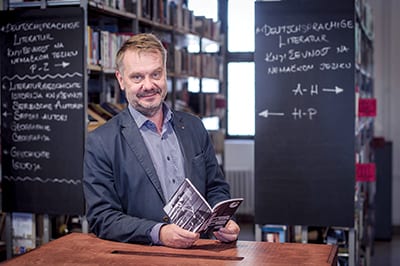 We are dependent to the extent to which that is imposed by bilateral relations, but we are not because we are not part of the composition of the Ministry of Foreign Affairs of Germany, even though it finances us, nor do we operate within the framework of the German Embassy in Belgrade.

In Serbia, we also have a German embassy and a Representative Office for foreign affairs, and we consider ourselves as an open house for all people who want to work with us. There are countries where that is not the case. With you, in Serbia, we don’t have any reason whatsoever to protect ourselves with fences or to build walls. In countries where such needs exist, the Goethe-Institut becomes a kind of interlocutor and has the role of an embassy or a representative office for foreign affairs.

The success of our cultural cooperation also depends on the overcoming, or at least the reduction, of stereotypical opinions that we both have about each other. How would you comment on this?

– In my opinion, stereotypes are not accurate assessments. Germans are considered precise, hardworking, disciplined, and on the negative side – let’s say we’re not humorous. Prejudice creates tension. It is necessary to establish a dialogue with which you can smash prejudices.

Once upon a time, when there was no internet, the Goethe-Institut was a window into Germany, while today we are an engine that drives topics and inspires them. It used to be different: we, for example, find a string quartet, bring them to Belgrade, they hold a concert, we show them Kalemegdan the next day and wave to them as they board the plane. But today we use performative approaches to encircle and enrich them, for example, with podium discussions, to involve young people in them, organising masterclasses, to be a binder for all those artists and those who receive their art. The most important thing is for that not to be a one-way street.

The Belgrade International Theatre Festival, BITEF, has just finished, while the beginning of October will see the staging of the Belgrade Jazz Festival and the month ends with the Belgrade International Book Fair, which this year has four countries where German is spoken as guests of honour, namely Germany, Austria, Switzerland and Liechtenstein. Is it too early to talk about, for example, the programme for the Book Fair?

– No, it’s not too early. We have been dealing with this topic fundamentally for a long time. We would like the Fair to be a fireworks’ display for German-language literature. We will try to secure authors, but that won’t be our only activity related to the fair. I am well acquainted with the Belgrade Book Fair, and I know that those who talk about it as a good opportunity to trade are mistaken. During the Book Fair, we will have programmes also running outside the fair halls. The main umbrella under which our activities are implemented are the embassies of Germany, Austria and Switzerland, which also represents Liechtenstein. The main guest will be Nobel laureate, Herta Müller.

The organisation of our appearance at the Book Fair is huge. We are assisted by the Austrian Culture Forum, the Crocodile Association, the Traduki translation agency, the Bertelsmann Foundation etc. 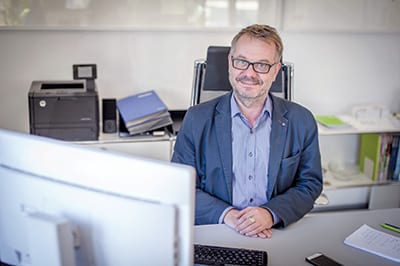 For me, the most important thing is that the authors we bring to your Book Fair will spend a few days in Belgrade, taking back to their areas impressions of Belgrade and Serbia. They are important multipliers. Belgrade will become positive-sounding for Germans. For the Goethe-Institut, it is very important for the voice that they convey to continue to live and to expand. And everything I’ve told you regarding writers also applies to German performers in Bitef and the jazz festival.

The Goethe-Institut and Bitef have traditionally cooperated for years without interruption, while with the Jazz Festival, or rather with the Belgrade Youth Centre which organises this festival, we have cooperated for six years, and for the same number of years we have been organising the Goethe-fest, a film festival of new German productions that this year sees us bring 11 films … not to list more.

Is that a way for a culture to help Serbia become part of the European Union?

– Culture frees emotions. Here’s an example of how we do it: right now we are organising a series of jazz concerts with artists who perform with your artists – “Dorćol Session”. Music doesn’t require translation, as we feel it. The film, although it does require translation, can be understood purely on the basis of its images, which fortunately most often express love, hate, fear, betrayal, joy, and other things that we all understand without a translation. But cultural categories are not categories considered when it comes to European Union accession processes. Culture is not the one that will decide on that in any way.

You just mentioned translation. Are you satisfied with the number of German books translated into Serbian?

– There are never enough translated books, and it is never sufficiently consistent and consequential. This has nothing to do with the quality of literature, but rather the market. In Germany, they read your classics, Andrić, Selimović, Crnjanski, Đilas. A new translation recently emerged of Andrić’s novel The Bridge on the Drina, which is known as a historical canon. There is market interest in new translations of your classics.

I recently spoke with the representative of an important publishing house in Germany, who said that Borislav Pekić should be rediscovered. Of contemporary authors, Velikić is primarily read. Germans hardly notice the differences between writers from the former Yugoslavia, not understanding that Miljenko Jergović is not a Serbian writer, but in a way that doesn’t matter, because it is a common cultural space.

I was struck by your great awareness of German culture, its artists. Working in such conditions is a real pleasure

A few years ago, when there was a focus on Serbian literature at the book fair in Leipzig, there was an increase in translations of your books into German, but that also drew attention to other parts of the common cultural space. You know, Handke isn’t even a German writer, but we don’t protest because everyone thinks he is.

– We work with young people and for young people. Young people and their interests are an important part of our activity. The young people we gather around our projects are mostly of student age. We adapt to their topics, not suggesting them, and in these projects, we are accompanying assistance. The topics that interest young people in Belgrade primarily concern city planning and impacting on the city’s appearance. Here I primarily mean the Belgrade Waterfront, and the changes happening in Dorćol.

How is your cooperation with the Ministry of Culture and Information?

– I am satisfied with cooperation, and for me personally, the transparency in the work of the Ministry is particularly important, here I mean in particular the availability of the results of all funding contests initiated by the Ministry. It is also important that the Ministry of Culture supports the same events that the Goethe-Institut considers as being important, for example, Bitef, the Book Fair and the like. It is also important that in this respect there exists significant cooperation with the City Secretariat for Culture, so your cultural events and institutions often have two sources of material support.

What do you think of our contemporary creative forces; could you highlight some titles that appeal to you?

– While I drive my car to work, I often find myself in traffic jams. Then I like to listen to Rambo Amadeus. I love listening to Serbian pop music, which has interested me for a long time because listening to songs is a good way to learn a language. For example, the songs of Goran Bregović helped me in that – probably because, as Bregović himself says, there is some secret connection.

I would mention your writer Aleksandar Tišma, who shed light in a good way on the dark chapters of our two countries’ common history. When it comes to films, I would highlight Srđan Dragojević’s The Parade, Goran Radovanović’s Enclave … and I don’t even need to mention the films of Emir Kusturica, as they are implied.

And Belgrade; how do you like it in Belgrade?

– I am delighted with the place where the building of the Goethe-Institut is located, and seemingly many others are too, as we are often called by people who ask us if they can take pictures of Knez Mihailova Street from our balcony. The view is truly wonderful. You can see the corner with Kralja Petra Street; you can see the Cathedral Church and Branko’s Bridge.

This is a great place to work. I am also unceasingly surprised by how informed you are. Immediately at the start of my residence in Belgrade, I had a series of conversations with representatives of culture and I was struck by your great awareness of German culture, its artists. Working in such conditions is a real pleasure.