Enrique Camacho Garcia, Director Of The Cervantes Institute In Belgrade

“We try to transfer European and universal values through our programmes”

The Cervantes Institute is the official Spanish Language and Cultural Centre, founded by the Government of Spain in 1991. Its mission is to promote the teaching of the Spanish language and Spain’s co-official languages throughout the world, in addition to fostering knowledge of the cultures of Spanish-speaking countries.

In 2004, Belgrade became one of 87 cities in 44 countries over five continents where the Cervantes Institute is present. Here Enrique Camacho Garcia, who has been the director in Belgrade since 2014, talks to CorD about many recent activities, as well as announcing plans for 2017 with great enthusiasm.

Camacho Garcia reminds us of Spanish language courses, cultural activities and the institute’s library as the main pillars of the work of the Cervantes Institute. Like other foreign cultural centres, the Cervantes Institute also organises language courses. However, it is probably less known that, apart from Spanish, those who are interested can also learn the Basque language, as well as Galician and Catalan – all official languages in Spain. The Belgrade office also organises exams for Diplomas in Spanish as a Foreign Language (DELE), an official, internationally recognised certificate that certifies the knowledge of Spanish of non-Hispanic speakers.

In 2015, Spain’s Congress of Parliamentarians passed an act of parliament according to which Spanish citizenship can be granted to Sephardi Jews of Spanish origin that can prove their origins and demonstrate special links to Spain.

Among other requirements, applicants must pass two tests that are designed, administered and granted by the Cervantes Institute on behalf of the Ministry of Education, Culture and Sport.

Command of the Spanish language is proved by obtaining a DELE at level A2 or higher. Furthermore, starting in 2016, the Cervantes Institute promotes the SIELE certificate of proficiency in Spanish, aimed at young people and adults who speak Spanish as a second or foreign language. This is particularly useful for students who intend to continue their studies within the Erasmus programme.

Our interlocutor views the development of Hispanic culture in Serbia as significant. As such, the Institute has solid cooperation with the Faculty of Philology and the Faculty of Philology and Arts (FILUM). In addition, a teacher development programme is also available. Within cooperation with primary and secondary schools throughout Serbia, Camacho Garcia mentions two recent calls. The national competition in shooting short films on smart devices brought together talented high school students, while younger pupils engaged in a national competition in the creation of comics.

The Cervantes Institute cooperates closely with many embassies in our country as it strives to promote the culture of the Hispanic world. Cooperation with local cultural institutions, leading festivals and manifestations is equally important.

“Integration into the cultural life of Belgrade is the main mission of cultural programmes”, he adds. Partnership depends on projects. For instance, on the occasion of the 160th anniversary of the birth of Nikola Tesla, company Telekom Srbija presented a unique multimedia event on the façade of the Cervantes Institute in Belgrade – “Tesla’s time machine”. 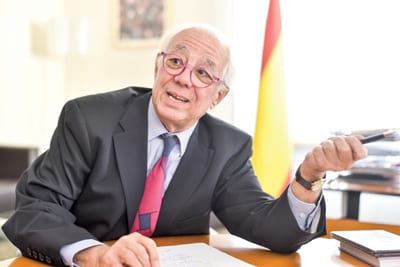 Camacho Garcia, a physics graduate and ardent admirer of Tesla’s work, is particularly proud of this event.
The Cervantes Institute is also a proud member of the EUNIC network. “We try to transfer European and universal values through our programmes. We promote multilingualism, but we also respect diversity.”

Speaking about diversity, one of main programmes in 2017 will present the integration of the Roma community into Spanish society. There will be lectures and conferences but also concerts presenting interrelations between flamenco music and music created by the Roma people in Spain. The fusion between flamenco and Serbian music will be especially interesting for the audience.

ONE JUBILEE AND MANY EVENTS

Camacho Garcia also notes that migration will be an important topic for the year ahead. A photo exhibition will be organised to highlight this topic.

In 2017, the Cervantes Institute will mark the jubilee of the 200th anniversary of the birth of Jose Zorrilla, author of the play “Don Juan Tenorio”. Some planned events include a presentation of films dedicated to the myth of Don Juan and conferences about this literary hero.

Another activity that will mark the calendar of the Cervantes Institute in 2017 is a promotion of the sport. As the institute’s director explains, “News agency EFE has already organised an exhibition in Spain to present Spanish athletes worldwide. This will be combined with an exhibition of Serbian athletes who are famous in Spain. We always try to connect Spain and Serbia.”

Camacho Garcia, who has already served as director of the Cervantes Institute in New York, Paris and Toulouse, is enjoying his time in Serbia and has found many similarities between the Spanish and Serbian peoples. “They have the same mentality, a Mediterranean one. I feel at home in Belgrade,” he insists, adding that he is impressed by the street culture and people who socialise in cafés, just like in his homeland.

“When I had just arrived in Belgrade, the Cervantes Institute participated in the “Magnificent Seven” documentary film festival. I was so delighted and surprised to see the hall of the Sava Centre – full, for documentaries! One of my favourite pastimes is watching documentaries, and I can say that I have never witnessed as much interest in these films as I saw in Belgrade.”

Belgrade has so much to offer, adds Camacho Garcia. He likes to watch performances at the National Theatre but also enjoys various Savamala events. “I even went to Manu Chao’s concert at EXIT in 2015 and it was great.”

Camacho Garcia concludes by insisting that people in Serbia value culture and that he is constantly reminded about the similarities between the Spanish and Serbian people.