Dušan Vujović, Minister of Finance of the Republic of Serbia

The National Programme for Countering Shadow Economy Will Be a Success

The new law on para-fiscal charges, expected by mid-2017, aims to collect and order hundreds of charges presently scattered over dozens of laws, ensure their full transparency and predictability for all businesses, as well as provide a platform for rational use and efficient management of public resources

We have had excellent cooperation with NALED in surveying and processing information on close to 500 fees and charges that served as a basis for conceptualizing and preparing this law. NALED also provided significant inputs for the preparation of the new law on financing local governments drafted last year and had a lead role in reviving the efforts to fight the shadow economy in a pragmatic and organized way.Dušan Vujović

How do you see the future model of financing municipalities through taxes and non-tax levies charged locally?

A comprehensive realistic approach to reforming sub-national finance is crucial. We have learned the hard way that this problem is much more complex than we thought. Good empirical work and clear concepts were not sufficient to secure ownership at the local level. Political economy issues tend to dominate the public debate and must be adequately addressed in an open and transparent way, early in the process. 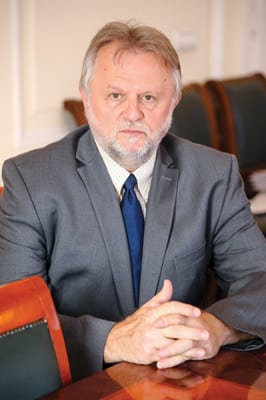 Our intention to introduce multiple changes in the local finance law turned out to be too much. The benefits of proposed horizontal reforms (to reward good revenue performance, eliminate/curb taxes hurting the business environment, and promote greater equality across municipalities), could not match the strong opposition to redistributing revenues between the republic and local level.

Moreover, local governments were not ready to embrace rule-based para-fiscal charges although they knew that excessive charges drive investors away and undermine new job creation.

Lessons learned will help us better prepare the new law on para-fiscal charges expected in mid-2017. The law will clearly define the types of charges presently scattered over dozens of laws, specify due amounts by sector, location and taxpayer, periodic indexation rules, payment and control arrangements.

How would you rate cooperation with NALED and can the Ministry of Finance count on “burden-sharing” in future projects and, if so, under which conditions?

NALED has helped us by recording and documenting citizens’ and SME complaints. Like a mirror, this enabled us to see how things really are. They also helped us identify and systematise almost 500 fees and charges that served as the basis for preparing this law. NALED provided significant inputs for the preparation of the new law on financing local governments.

It is difficult to estimate the level of the shadow economy in Serbia. Based on partial and imprecise information we have, including the results of targeted tax audits in recent years, the size of the shadow economy appears to be quite large, well beyond the acceptable levels of around 10 to 15 percent of GDP

Looking forward, based on its demonstrated comparative advantage, NALED could help us introduce natural resource statistics recently launched through a World Bank initiative. That would provide a more reliable and comprehensive basis for assessing fees and charges in the future in line with best world practice and the effects on national wealth.

The Ministry, the Tax Administration and the Customs Administration have a key role in the implementation of the National Programme for Countering the Shadow Economy. Do you expect the grey area transactions to be reduced by more than three per cent of GDP in the next five years, as envisaged by the programme?

Indeed, our concerted efforts are aimed at detecting, monitoring and reducing (fighting) the shadow economy. Reducing the scope for shadow economy, by e.g. providing incentives for non-cash payments, is an important element of that strategy.

At this time the main sources of risk fuelling the shadow economy range from smuggling, illegal re-export activities and reimbursement of VAT, to improper accounting practices and manipulations of books. The problem is exacerbated by the fact these activities are done both by mafia-criminal structures in unregistered companies and formal sector employees in legally registered companies.

I am convinced that the state can raise the level of public awareness regarding the negative consequences of the shadow economy, improve the inspection system, and more effectively prosecute crimes and infringements. NALED, which played a key role in the development of the National Programme, should continue to support its implementation.