Dragoljub Damljanović, President of the French-Serbian Chamber of Commerce

Economic cooperation between France and Serbia is irrefutably strengthening each year, and this year’s arrival of French President Emmanuel Macron will further strengthen French-Serbian links. The Chamber will continue, as it has to date, to work in order to increase France’seconomic presence – not only in Serbia but throughout the region

The French-Serbian Chamber of Commerce (CCI France Serbie), which is this year celebrating its 10th anniversary, has taken on the important role of familiarising French companies that don’t operate in this region with its potential, and of acquainting the French business community with the possibilities of investing in Serbia.

“We were established precisely with the goal of strengthening bilateral ties, especially economic ones,” says Dragoljub Damljanović, President of the French-Serbian Chamber of Commerce.

The French-Serbian Chamber of Commerce provides its members with a large number of events of varying formats, as they represent the most fertile ground for the networking of companies and establishing business cooperation. “On the other hand,” explains our interlocutor, “we also provide services to French companies that are not yet present on the Serbian market, and I think that our contribution there is particularly valuable. Specifically, over these 10 years, we’ve used different methods to address a problem that’s still relevant, and that’s the non-existing or relatively poor image of Serbia in France and the very weak promoting of Serbia’s potential in France. We have participated, and continue to participate, in numerous B2B meetings in various French regions, and we’ve also worked with hundreds of French companies. We also try to organise multiple visits to Serbia several times a year, whether that be delegations of French businesspeople, individual companies or regional chambers. And that’s where our contribution can best be quantified.”

What is the profile of the CCIFS like today? Where is its place in Serbian society, among its members and in the milieu of other mixed chambers that operate in Serbia?

– The French-Serbian Chamber of Commerce is today a proactive business institution that gathers together more than 120 member companies, both French and Serbian. This is a business organisation that provides its members and partners with more than 40 events annually, and which seeks to secure high-quality and useful events of various formats (training courses, conferences, round-tables, networking events, business receptions, meetings among members, exclusive events etc.), and which has a reputation as a dynamic chamber focused on its members.

I believe that we’re among the most active and most innovative chambers in Serbia, and that’s what our members tell us daily. In that sense, by listening to the desires of members, as this year we decided to also open up membership to other companies, not only French and Serbian.

Cooperation with other bilateral business associations is something that we’ve nurtured since the first day. It was based on our initiative, seven years ago, that inter-chamber ‘Speed Business Meetings’ were launched in Serbia, and to this day they remain among the favourite activities of all chambers, as well as the first gatherings of the chambers of European countries. Through exchanges of experience, chambers can learn a lot from one another, and we will advocate for the further intensifying of our cooperation.

The French Development Agency will cover the region of the Western Balkans from Serbia, which will undoubtedly contribute to raising interest in Serbia among new French companies, and will also ease their arrival significantly

You recently published the brochure “French business in Serbia, successes and perspectives”. What kind of picture does this publication provide when it comes to the French presence in Serbia and cooperation between the two countries’ economies?

– This brochure, which we published late last year following confirmation of President Macron’s upcoming visit, aimed to present the economic presence of French companies through sector-specific reviews. In it, one can see that French companies in the agriculture, machinery and metal industries, as well as the IT sector, recognise the potential of Serbia and opt to invest here. This publication also highlights the great interest of major corporations in public-private partnerships and concessions, as is the case with Suez, which will build the Belgrade Waste Treatment Centre, and with Vinci Airports, which took over a concession for the Belgrade airport. Economic cooperation is irrefutably growing each year, and President Macron’s arrival in July this year will further strengthen French-Serbian links.

To what extent have the major French investments that we’ve had the opportunity to record in the previous period influenced the awakening of interest among potential new French investors? What kind of questions do they have when addressing your chamber?

– The signing and implementation of large projects have had an exceptionally positive impact, serving to ensure that there is more talk in France about Serbia in a positive context, and contributing to companies that hadn’t previously considered our country as a possible business destination to do so. 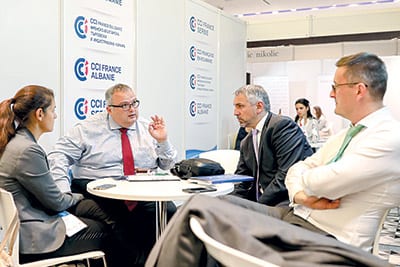 This is particularly important for French SMEs because they are very cautious when it comes to entering new markets and are encouraged by these positive examples.

Apart from that, the arrival of large French corporations also implies the potential arrival of their partners, entire supply chains, which is of great importance to our economy.

How would you rate cooperation between the CCIFS and the Government of Serbia; and other important stakeholders on the economic scene?

– Our Chamber works very successfully with the institutions of the Republic of Serbia and does so via the implementation of at least three events annually with representatives of various ministries and the state administration. It was precisely due to our satisfaction with this cooperation that we presented, on our 5th birthday, an award for merit in the development of bilateral relations to Aleksandar Vučić, who was then the Prime Minister of Serbia. Our cooperation is still just as good.

We also cooperate excellently, and daily, with other stakeholders on the economic scene, especially international financial institutions with which we regularly organise activities – not only in Serbia but throughout the entire region.

As of September, Belgrade will become the seat of the French Development Agency for the territory of the Western Balkans. What is the significance of this decision for Serbia and the region?

– We are very much looking forward to the arrival of the French development agency in Serbia, especially given that Belgrade will be the regional hub. The French Development Agency has received a mandate to cover the region of the Western Balkans from Serbia, and this will be the first time that it operates in Europe (it is the most active development agency in Africa). This will undoubtedly contribute to raising interest in Serbia among new French companies, and will also ease their arrival significantly.

Our members constantly tell us that we’re among the most active and most innovative chambers in Serbia… That’s why we’ve decided, as of this year, to also open up membership to other companies, not only French and Serbian

As a representative of the French business community and as CCIFS president, where do you personally see Serbia’s key advantages for investors?

– Serbia’s attractiveness lies primarily in its people: we have incredibly high-quality, well-educated and inventive human resources – which is especially evident in the digital economy. Then there is the country’s central geographical position, industrial tradition, natural resources… Numerous sectors in Serbia offer wonderful prospects.

In which areas should work be prioritised when it comes to improving the business climate?

– There is still room for improvement in work on the predictability of operations: reform of the public sector and the judiciary; general improvement in the efficiency of our administration etc. In that sense, digitalisation is of major importance to Serbia. I’m glad that our government has an ear for this and that it encourages entrepreneurship, especially in the field of new technologies. That’s where our future lies.

Belgrade and Serbia have been officially declared for the international French Tech community. What will this mean for Serbia’s IT community in practical terms?

– As I’ve already stated, the development of digital technologies is very important for our country. It is also important for France, which launched the French Tech initiative in 2014, gathering together a large number of start-ups and digital technology companies, and enabling their grouping and connecting. This year, with the support of the CCIFS, the French Tech Community was founded in Serbia, and that’s very pleasing for us because Serbia is a country of tremendous opportunities when it comes to the development of innovative and digital technologies. There will be greater opportunities for cooperation with French Tech, so we believe that this will also contribute to the launch and development of start-up companies in Serbia.

Given the continuous growth of the French business community in Serbia, how do you see the further profiling of the CCIFS?

– Our Chamber aims to continue bringing together all French companies in Serbia, to connect them with high-quality Serbian companies and potential associates. Given that we’ve also, as of this year, opened up to companies that are not only French or Serbian, we hope to increase the mass of our membership, which would provide members with even more opportunities to develop business.

Moreover, as of two years ago, our Chamber also covers the territories of Bosnia-Herzegovina, Montenegro and North Macedonia, offering French companies an even bigger and more attractive market, so we hope to see an increase in the number of requests for support in the implementation of projects in the country and around the region. We hope that this will further increase France’s economic presence – not only in Serbia but rather throughout the region.

Ambassador of France to Serbia, H.E. Jean-Louis Falconi on behalf of the French Minister of Culture awarded the Order of Arts and Literature in...
Read more

SUEZ Partners With Belgrade For A 300 Million Euros Investment

The consortium1 formed by SUEZ and its partners successfully concluded talks with IFC2 and EBRD, the main lenders of a €300 million non-recourse credit...
Read more

Prime Minister Ana Brnabic said during the talks with newly-appointed Ambassador of France to Serbia Jean-Louis Falconi that the relations between Serbia and France...
Read more

French Serbian Chamber of Commerce - CCIFS organized a September gathering of members and partners at its premises in the heart of Belgrade. The French...
Read more

Embassy of France in Serbia announced H.E. Jean-Louis Falconi as new Ambassador. Ambassador Falconi was born on 8 February 1964. He graduated from the...
Read more

France, one of the leading world economies and a country that enjoys a considerable reputation in key economic sectors, is itself a highly sophisticated,...
Read more

Over the past two days, Biarritz, France has hosted the G7 Summit. Initially a meeting behind closed doors for seven Heads of State and...
Read more
Cord MagazineLeaders Meeting Point