The focus of our economic policy has been placed on increasing the competitiveness of the economy by using structural reforms and infrastructure development to create conditions to increase domestic and foreign investments. As a result, we expect the Montenegrin economy to grow both this year and next

The Government of Montenegro estimates that the real growth of the Montenegrin economy this year will total three per cent, which is in accordance with the European Commission’s assessment. This will be a continuation of good results achieved last year, when the real GDP growth rate amounted to 4.4% – which was the highest growth rate in the region and among the highest in Europe. “That is an excellent result of the Government’s economic policy. The results achieved last year impose an obligation on us to continue such a growth trend this year as well, with the aim of also creating new jobs by increasing economic growth and boosting our economy,” says Montenegrin Economy Minister Dragica Sekulić.

How do the operations of the steelworks, KAP and Bauxite Mine impact on the national budget and overall macroeconomic stability?

– The mining and industry sectors are definitely among the most important sectors of the Montenegrin economy, with no small impact on our economy. When it comes to industrial production, the biggest contributor to GDP trends, employment and exports is the base metal (iron and steel) production sector, represented by the two largest Montenegrin companies: Aluminium Plant Podgorica JSC (KAP) and Toščelik Nikšić JSC (former Steelworks Nikšić). Their contribution to the gross value generated by the manufacturing sector is 26.6%. In terms of exports, this sector represents the main sector of the manufacturing industry and has primacy, with a share of almost 40 per cent.

The mining and quarrying sector recorded production growth of 113.9% in 2017 compared to 2016, a significant part of which relates to production growth of 200 per cent in the area of metal ore exploitation. Moreover, exports of mineral ores increased by as much as 78.9% compared to 2016, which has a significant impact on reducing the export deficit and has a further positive influence on the macroeconomic balance.

Apart from direct contributions, these companies have an important impact on our economy through budget revenues, in terms of taxes and contributions paid, certain fees that increase municipal budgets, as well as concession fees in the case of the Mine.

Where does the domestic economy fit in the plans of the government?

– Investing in the domestic economy, both financially and technically, is a long-standing practise of the Ministry that will continue in the period ahead. We are currently implementing nine support programmes for our businesspeople, the beneficiaries of which can certainly also include foreign companies. These programmes concern, amongst other things, the introduction of international standards to operations, the introduction of innovation, the modernisation of production equipment and the like.

Among the areas of your ministry’s focus are major projects in the fields of energy and manufacturing. In which areas have you recognised new drivers of economic growth?

– The potential for economic growth has been recognised in the fields of tourism, energy, agriculture and industry, which have been identified as strategic priorities of the Government of Montenegro. As for the areas you mention, we have very important activities and projects in the energy sector – an area that falls under the jurisdiction of the Ministry of Economy. 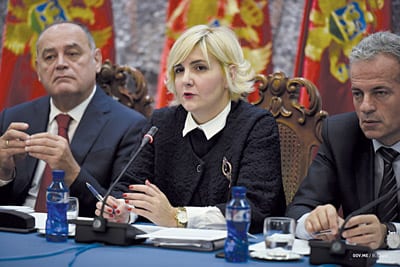 Montenegro has exceptional potential in the energy sector that is waiting to be utilised. Here I am primarily referring to the hydro-potential of the Morača and Komarnica rivers, but also solar and wind energy potential, the exploitation of which is beginning slowly but surely. We recently announced the first tender for the construction of a solar plant with a capacity exceeding 200MW at a location in Ulcinj, which we expect to generate a lot of interest.

The renationalisation of power company EPCG, launching the process of environmentally reconstructing the Pljevlja Thermal Power Plant, finalising construction of the undersea power cable – these represent the most important activities at present that will result in the establishment of an even more stable and secure electricity system, which is a prerequisite for the development of all other strategic branches, such as tourism and industry.

The government has announced that it will soon begin the process of resolving ownership relations at electricity company EPCG. Are you close to choosing a buyback model through which you could immediately acquire shares in EPCG? What is the next step in identifying a partner for EPCG?

– In mid-May, which marked the contractual deadline, the Government of Montenegro paid the first tranche of €68.9 million to Italian company A2A, thereby repurchasing 17,252,885 shares in the Electric Power Company of Montenegro (EPCG). The state thus reacquired a 70.16% ownership stake in EPCG from the previous share of 57.01%, thereby practically restoring its ownership stake in the company to the level it was at prior to 2009’s partial privatisation and recapitalisation.

The aforementioned tranche is one of four that will be paid to A2A in total. More precisely, alongside the payment already made, the state will pay another tranche in May next year, while the remaining shares will be acquired by EPCG itself through two tranches to be in June and July 2019 respectively, owing to the mechanism for acquisition of its own shares.

Most of the funds paid by the state will be provided from the distribution of profits through equity held in EPCG and the corresponding tax, ensuring that the entire share redemption procedure will be completed with a very low fiscal impact.

We are focused at this moment on the renationalisation of EPCG, but we certainly remain open to talks with anyone who shares our strategic commitments and visions regarding the development of this company and the energy sector in Montenegro.

We continue to create a positive business environment, both through positive legislative changes and the implementation of financial and non-financial support programmes

You have decided to develop resources in the fields of both non-renewable and renewable sources, in which you are very close to achieving the national target of 33% of energy generated from renewable sources in gross final consumption. What will be the backbone of the country’s energy policy in the period ahead?

– Montenegro is a country with exceptional natural resources, a significant part of which is suitable for exploitation for the purposes of generating electricity. Only 20 per cent of the country’s huge hydro potential is currently being utilised. That is why we have actively embarked on the process of affirming the value of our rivers when it comes to generating electricity, while simultaneously adhering to all requirements of environmental protection. 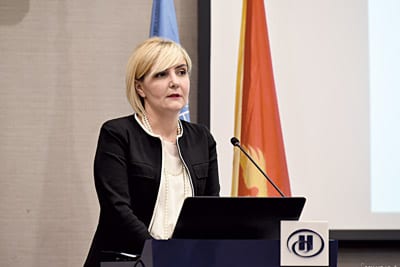 We currently have 13 small hydropower plants (SHPPs) in operation, while we envisage a total of 53 SHPPs in the coming years, pursuant to the contracts signed. Montenegro has had a wind farm on Krnovo since last year, while the construction of a wind farm on Možura is underway.

As you can see, we have embarked very ambitiously on the exploitation of renewable energy sources, which is why we’ve approached our goal very quickly. With an awareness of that, we stopped issuing energy permits for the construction of facilities that require production incentives two years ago. In accordance with the recommendations of the Energy Community, we started working on the preparation of amendments to the Law on Energy, in order to improve the existing system for stimulating energy generation from RES, while we have been leading parallel discussions with investors interested in building major plants – such as solar or hydroelectric power plants – without incentives.

Are you satisfied with the pace of work when it comes to exploration of oil and gas in Montenegrin territorial waters?

– I am very satisfied with the pace of activities in the field when it comes to the existing hydrocarbons exploitation and production contracts. Montenegro has to date concluded two oil and gas exploration and production contracts with the Eni/Novatek consortium for four offshore blocks, and with Greek company Ener gean for two offshore blocks. Preparatory activities for the start of a seismic survey under both concession contracts are currently underway.

Moreover, preparations are well underway for announcing a tender to award a concession for exploration of the Montenegrin seabed aimed at collecting and processing seismic data and interpreting the results obtained, in order to increase the level of knowledge about the potential for finding commercial deposits of oil and gas under our seabed. This tender will serve as the basis to announce a new, second tender to award a concession contract for oil and gas exploration and production at the end of 2019 or the beginning of 2020.

What practical effects do you expect from the undersea energy cable to Italy, which is due to be completed by the end of this year?

– The importance of this project extends beyond the borders of Montenegro, because the benefits of its construction will be felt by the entire region. It is also significant for the European Union, because it will represent a unique energy bridge between West and East, as confirmed by the fact that it has been included on the EU’s official list of Projects of Common Interest, which led to us receiving €25 million of EU financial support for one of its parts.