By quickly and efficiently adapting to market conditions and changes, while retaining the recognisable and recognised high quality of products, professional technical support and services, Sika Srbija d.o.o. has managed not only to meet all challenges, but also become probably the local market’s most important company in its area of business.

Through the consistent implementation of the corporate Sika Strategy 2020, along with continuous investment in the development and promotion of employees and managers, we will also ensure respectable growth and further improvement of the achieved results in future.

SIKA has been operating in Serbia for 15 years. I can proudly acknowledge that Sika Srbija d.o.o. has been constantly growing in all business segments since its establishment in 2002. Today, according to many parameters, Sika Srbija is highly ranked among Sika subsidiaries, of which there are almost 100 in the world.

In addition to the excellent results within the Group, we are pleased to have a highly respected local market position, which is being continually improved and strengthened. By quick and efficient adaption to the market conditions and changes, while retaining the recognisable and recognised high quality of products, professional technical support and service, we have managed not only to meet all the challenges but also become probably the most important company in the local market in our business area, says Dragan Gavrilović, General Manager, SIKA Srbija d.o.o.

Has your 2014 investment in the factory in Šimanovci paid off?

– Important factors of our success surely are realised investments, first in the production of concrete admixtures in 2012, and then in the mortar plant in 2014. Carefully planned and realised investments have contributed to the creation of conditions for the full affirmation of other, probably key, success factors, which primarily relate to the quality and organisation of all employees in Sika Srbija. Their commitment, knowledge, loyalty and effort, as well as the well-known Sika Spirit, are certainly our highest values.

Through the consistent implementation of the corporate Sika Strategy 2020, along with continuous investment in the development and promotion of employees and managers, we will also ensure respectable growth and further improvement of the achieved results in future.

There are many active construction sites in Serbia at the moment. The company has already taken part in a number of major projects: bridges, roads, shopping centres… Which infrastructure projects do you participate in and to what extent are you involved from Serbia in projects in the region?

– Sika Srbija follows and actively participates in all infrastructure projects in the country, with special attention and dedication. Sika has had a formed team for more than 10 years, composed of employees from various units, in charge of monitoring and providing complete support to all parties engaged in the implementation of infrastructure projects.

By fully understanding the importance of investing in infrastructure projects, like all citizens of Serbia, we are also pleased with every effort and every step forward made in the construction of such projects. However, as employees of Sika Srbija, we are naturally a bit more pleased for each of several dozen bridges, tunnels and other infrastructure facilities, in which we actively participated and contributed. 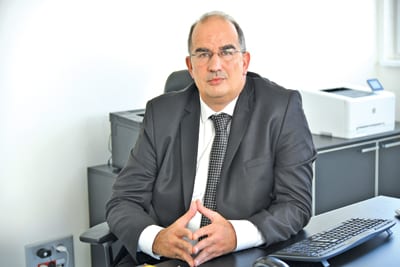 Employees engaged in construction projects have the privilege of feeling special satisfaction by being able to observe and use the facilities in whose construction they participate, which in time grows and lasts a full lifetime, making it more meaningful. By travelling through the completed sections of corridors 10 or 11, today we are able to feel the same pleasure again and again.

We hope that further works on corridors 10 and 11 will be carried out even faster and more efficiently, but they are also strongly needed on all other infrastructure projects.

Over the past year, we have been very engaged in the implementation of the capital infrastructure project that is the Bar-Boljare highway, which is being carried out in Montenegro.

With its grandeur and importance, the project goes beyond all current infrastructure projects of a similar type in Europe. We are also pleased to be able to contribute to the construction of dozens of tunnels, bridges, viaducts and other facilities through cooperation with companies BEMAX, CRBC and other partners.

Sika products manufactured in Serbia are also exported to the countries of the region and widely used and successfully applied in their infrastructure projects. One peculiarity, apart from exports to all countries in the region, is also the placement of Sika products produced in Serbia in highly developed European countries, including Switzerland.

Carefully planned and realised investments have contributed to the creation of conditions for the full affirmation of other, probably key, success factors, which primarily relate to the quality and organisation of all employees in Sika Srbija. Their commitment, knowledge, loyalty and effort, as well as the renowned Sika Spirit, are certainly our highest values

Your company is among the world’s leaders in the field of construction and industry. Are you able to apply the same or similar standards and innovations that are used today in the world on the markets of Serbia and the region?

– Innovative power and application of new technologies are Sika’s trademarks since its foundation in 1910. I can say with great satisfaction that such trend is retained in Serbia and in the countries of the region. All innovative and modern technological solutions are quickly accepted and used successfully in the local market, and some of them made “revolutionary” breakthroughs in the construction and industry. I assume that the former strength of the local construction and its former global presence has contributed to it. We believe that this will soon help in strengthening of local construction potential, which would return us to many markets where we were strongly present and made extraordinary results.

Considering the type of work you do, great attention is paid to the concept of green building. How does work in this field differ between the developed countries where Sika operates and, for example, countries like Serbia, which still need a lot of work in this domain?

– The Sika Group allocates significant funds to the green building concept, recognising above all its importance in terms of more efficient resource management and environmental protection, and then being driven by commercial reasons for its implementation and improvement.

We promote this concept actively and are ready to maintain this trend. We are also looking forward to the times to come, in which this concept, with complete justification, will have full affirmation.

It is time to reflect on the past 30 years of the bilateral cooperation programme and seek new paths of collaboration. Switzerland’s longstanding commitment...
Read more

Time For The Next Step In Supporting The It Sector

The pandemic has served to confirm the huge importance of digitalisation, while it will continue to have a significant impact on companies’ daily operations....
Read more