Dimitrije Knjeginjić, Vice President of the FIC and Ceo of Lafarge Serbia

Time To Speed Up Reforms

A lot has been done over recent years, but results are lacking in some of the key areas: in the reform of public enterprises and public administration, and in the modernisation of education, pension and health systems. But let’s give the Government time to show whether it’s ready to seriously tackle these areas

Did the Serbian government take seriously IMF Managing Director Christine Lagarde’s warning that self-satisfaction with fiscal adjustment can be a curse if structural reforms do not accompany it?

“We have yet to see whether this is so, on the basis of the results of implementing the latest arrangement with the IMF,” says Dimitrije Knjeginjić, Vice President of the Foreign Investors Council and CEO of Lafarge Serbia.

“As you know yourself, plans are one thing, and results are another. A lot has been done during previous years, but not everything, in the field of privatisation, while results are lacking in other key areas: in the reform of public enterprises and public administration, and in the modernisation of the education, pension and health systems. The reform of public enterprises and the modernisation of public administration represent the backbone of the new arrangement that the Government has obliged itself to undertake. In all honesty, the previous arrangements with the IMF also included structural reforms, though they didn’t yield the desired results. But let’s give the Government time to show whether or not it’s ready to tackle these areas seriously.”

What is lacking for Serbia to create a general business environment that favours economic growth?

– More modern laws are required, and their complete and consistent application. There is lots of work to be done, and we consider that several key areas should be emphasised.
Specifically, it is necessary to modernise the Tax Administration and resolve illogical aspects of tax regulations, such as the taxation of team building exercises, which are now absurdly considered as profit. Labour legislation needs to be corrected, in order, for example, for people to be paid more when they work than when they don’t, which is the case today because the state additionally taxes the benefits provided to employees by successful companies. The accelerated digitisation of public administration should continue. Work on the real estate cadastre needs to be sped up, and the problem of wild construction operations must be solved. Work must continue curbing the grey economy, while the potential of agriculture and the food industry must be unlocked through the modernisation of food safety regulations. And, lastly, it is essential to improve regulations on bankruptcy proceedings and liberalise foreign exchange operations.

– Serbia can boast of the fact that it has attracted the most investments in the region, but more growth is needed for it to catch up with the developed world. There is no magic and a quick remedy. Serbia must work consistently to make itself more attractive than other markets – not only in the region but also wider. It is true that subsidies help to entice some major investors, but all experience shows that serious economic growth is based on providing good conditions for doing business for all, and so we return to the issue of the quality of the business climate.

What is the stance of the FIC regarding the Government’s efforts to attract FDI, particularly from the UAE, China and Russia?

– We welcome the Government’s efforts to entice foreign direct investments, as that contributes to the development of the Serbian economy. At the same time, we would stress that it is crucial to implement these processes transparently, to promote Serbia as an investment destination that welcomes all high-quality and long-term orientated investments.

We participate in the Government’s Working Group for Combatting Illicit Trade and contribute, in a tangible and practical way, to the introduction of the same rules for all

The FIC brings together investors from around the entire world, providing support to new foreign investments from any country and any continent that bring know-how and best practises.

Do the huge construction works currently being implemented on major roads, railways and other lines of communication create a difference in investors’ perception of the region and Serbia?

– Yes, they make a difference in multiple ways. On the one hand, infrastructure development is important for every investor, particularly those who establish production lines in Serbia. Here we aren’t only talking about “traditional” infrastructure, such as road and energy networks, but also the development of infrastructure in the field of telecommunications and information technology. On the other hand, a broader geo-strategic dimension is vital to investors, as is the fact that the EU has – under the scope of the Berlin Process – emphasized the development of regional infrastructure, but also the fact that China has bolstered its efforts to redevelop the Silk Road.

What are your expectations when it comes to tax policies?

– We expect that there will be no more amendments to laws without a public debate and that work will be accelerated on the modernisation of the Tax Administration. Some positive developments are evident, as the Ministry of Finance has started publishing draft laws, which has meant that we’ve had the opportunity to participate in public debates over recent months regarding, for example, laws on property tax and VAT. We also have an open dialogue with the Tax Administration, because we want to help it transform into a modern and efficient institution that is at the service of the economy and citizens, but which also punishes those who do not pay their taxes, using modern risk analysis methods. 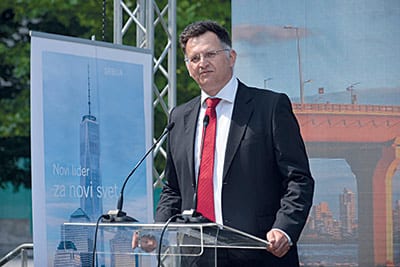 Specifically, we consider that great progress could be made with the introduction of “instructions for the enforcement of laws”, which implies the unifying of all rules and opinions related to a particular tax regulation. For example, the Law on Value Added Tax has several dozen rules and many more valid opinions, which makes it very difficult for companies, especially SMEs, even to register the rules that they should adhere to. That’s why we consider that good practices from developed countries should be applied and that all rules should be consolidated in one place, with their respect then rigorously demanded.

When it comes to amending regulations, we believe that priority should be given to resolving the issue of tax depreciation of real estate, defining the fair value of real estate assets, amending the treatment of team building activities and amending the ordinance on tax according to deductions on services.

How would you assess the effects of applying regulations in the real estate domain?

– Effects naturally exist, when you see that construction is one of the key drivers of GDP growth. There is a notable increase in the number of building permits issued, thanks to the introduction of a unified procedure and e-portal. However, there simultaneously visible problems of wild construction and a great need to accelerate and improve the work of the real estate cadastre. The ministry has announced and launched action on a solution to these two major problems, and we are ready to provide our contribution.

How successful has the government been to date in combatting the grey economy?

– Success in the fight against the grey economy is undeniable, but so is the need to work even more and to do so more systematically. In the 2012-17 period, the participation of registered businesses in the grey economy fell from 28% to 17%, while employment in the grey zone decreased by 10%.

Nevertheless, the grey economy continues to have a significant presence, which is why it is necessary, on the one hand, to harmonise sector-specific laws with the Law on Inspection Oversight and introduce risk analysis as the basis for targeting inspection oversight, while on the other hand it is necessary to implement a number of operational measures – from harmonising the number of inspectors and ensuring their professional training, to better coordinating the work of inspections and other state bodies, including prosecutors and courts. We participate in the Government’s Working Group for Combatting Illicit Trade and contribute, tangibly and practically, to the introduction of the same rules for all.

Even after the completion of the integration of Vojvođanska banka and OTP bank in 2021, we will continue to be dedicated to employees and...
Read more

At the Tax Administration we are concentrated fully on providing support in the best way to all measures of the Government of the Republic...
Read more
Cord MagazineLeaders Meeting Point