We are working continuously to implement the...
Read more

Milan Latinović, Acting Director Of The Office For IT And Egovernment Of The Republic Of Serbia

We are continuing the journey that we...
Read more

NALED has left its mark on almost...
Read more

According to the latest estimates of the Geological Survey of Serbia (GZS), which were made in 2000, Serbia has...
Read more
1 April 2019
Facebook
Twitter
Email

As in each of the previous 31 years, the build-up to this year’s 32nd Belgrade Marathon again sees its director, Dejan Nikolić, and all of his colleagues overwhelmed by obligations that they overcome one after another, but this time they’re also receiving invaluable international acknowledgements one after another

In accordance with stringent criteria and UN Sustainable Development Goals aimed at eliminating obstacles to every person in the world having equal living conditions, the Belgrade Marathon received the AIMS Social Award in the birthplace of the marathon.

“This relates to people with disabilities, and we have been particularly prominent on that front in the last few years, although we were surprised when we realised how much our work in that area was being followed, in cooperation with institutions such as the Commissioner for the Protection of the Equality of Citizens and the Sporting Association of Disabled People of Belgrade,” says Belgrade Marathon Director Dejan Nikolić.

In the jury’s explanation, the project “Heroes of the Belgrade Marathon” stood out…

Yes, it was particularly well received, because “Heroes of the Belgrade Marathon” are not runners who beat others, but people who beat themselves, and who send strong messages not only to other runners, but also to the general public. CorD Magazine recognised the importance of these aspects of the Marathon and helped us promote this campaign, so I can say with satisfaction that the thirteen years of successful cooperation between the Belgrade Marathon and CorD Magazine in the organisation of the CorD Charity Masters contributed to us winning this “Marathon Oscar”.

This “Oscar”, or the AIMS Social Award, is not the only award to arrive at the address of the Belgrade Marathon.

Without false modesty, we can boast that, after 31 years of organising the Belgrade Marathon, we received the two biggest and most important awards that a marathon of our category can receive. This “Oscar” is one of two awards that can be received from AIMS, the other being the Green Award, bestowed in the field of environmental protection. 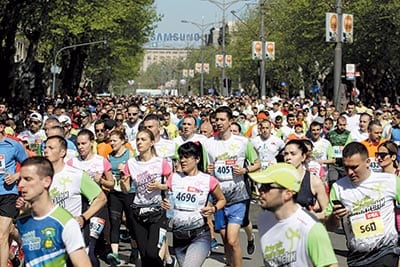 One thread that connects these marathons is that it’s practically almost impossible to get a starting number to participate in them. They turn down an average of between 250,000 and 400,000 interested runners every year,” says Nikolić.

What do these acknowledgements bring?

The World Marathon Majors, now under the patronage of company Abbott, as the title sponsor of the series, having been unable to accept more runners than at present, sought and found a backdoor to securing entry into one of the grand slam marathons for the runners on which the marathon movement depends.

These are veteran categories, which include competing runners aged over 40, people who travel the world and run, and the backdoor is the World Championships for Veteran Categories, which – as of 2020 – will be held each year at one of the six major marathons in rotation.

The inaugural World Championships for nine categories of men’s and women’s veterans will be held next year at the 2020 Virgin Money London Marathon, and veterans wanting to participate will receive starting numbers provided they fulfil the specified qualification standards.

The Belgrade Marathon will have over a million participants in all races this year, including our marathons, half marathons etc

They will be able to that have signed contracts with World Marathon Majors to become qualifying races. We expect the Belgrade Marathon to become a qualifying race in 2020. In order for us to have the time to prepare well and satisfy all the necessary criteria, in 2020, at the 33rd Belgrade Marathon, runners will be able to fulfil the standards to qualify for the World Championships, which will most likely take place at the Chicago Marathon. This is an additional challenge for us, but also for the City of Belgrade, to organise this marathon, and especially the 2020 marathon, to the very best of our ability.

We’ve heard that this “sign of quality” is already having an impact.

As soon as we published this news, we were contacted from Italy by Terramia, one of the world’s biggest travel agencies, which saw a meeting in June to prepare tourist packages and announced that we will be on their list for 2020. They are the agency that has the most “bibs”, or starting numbers, for marathons from the World Marathon Majors series, and that tells us that we have to start working immediately in order for the 2020 event to be at the required level.

We consider this as a benchmark moment for the Belgrade Marathon, regardless of all the difficulties and problems we’ve had and continue to have. We have reached a situation where the Belgrade Marathon must plan at least five to 10 years in advance. In the past year, we’ve signed a contract with a partner from China, the world’s largest in terms of this type of activity, which will – following a recent presentation in Shenzhen – bring a group of at least 50 runners from China to the 32nd Belgrade Marathon.

This is at the level of the Prague Marathon project, which had around the same number of runners from China in the first year, then 400, 800, and by the fourth year 1,500 participants from China.

You offer participants something new each year. In short, what can they expect at the 32nd Belgrade Marathon on 14th April?

We will have a special, humanitarian platform called the Race of Goodness for the first time. It has already been completed, and we worked with the Coalition For Welfare [Koalicija Za dobročinstvo]. This new platform, the first of its kind in the region, brings a higher level – everyone who “enters” the Race of Goodness will receive information about all the humanitarian campaigns we support, with descriptions of them and instructions on how to get involved. Each participant/donor will be recorded and it will be known how much money is collected and how much more money the campaign donated to requires. In the future, as has also been the case to date money does not go onto our account, so the slogan of this year’s marathon is “Run, enjoy and help someone”.

When it comes to “enjoying”, last year we had 20 music stations along the course, and this year there’ll be about 30! Of course, along with the Belgrade Philharmonic, which proved an absolute hit on Ada Bridge last year. Apart from music, we’ll offer other forms of entertainment, so for participants, we’ll create the first music map of the Belgrade Marathon, so that runners will know who are waiting from them where…

How is it possible that, despite all of this, the Belgrade Marathon is still obstructed by the Athletic Association of Serbia?

Unfortunately, the Athletic Association of Serbia, which has been announcing its own race for a year and a half that has yet to be staged, has been, and remains, an unfair competitor of the Belgrade Marathon, in the most serious sense of those words. The Belgrade Marathon is an event with a 31-year tradition that has struggled with and overcomes many obstacles to become a symbol of Belgrade and an event of special importance to Belgrade, the largest traditional mass sporting event in Belgrade and Serbia, and then many things were brought into question in just a few months by the leaders of the AAS.

They announced the first real marathon, the world’s biggest spectacle, the world’s fastest marathon runners, the world’s fastest marathon, they said that they would run on an incredibly flat course, and none of that has happened. Then instead of a marathon, they announced a marathon series, but only races over five and 10 km were held. Instead of a spectacular event, they got a spectacular failure. That’s not good for marathon running, for athletics, and least of all for Belgrade. The Belgrade Marathon will have over a million participants in all races this year, including our marathons, half marathons etc

GEOING is one of the first privately-owned companies in the Republic of Serbia to have been engaged in geological research since 1996, and since...
Read more

UNIQA was a proud sponsor and official insurance company of the 26th Children’s Marathon.  For the 6th year, UNIQA took care of the safety of...
Read more