Darko Jakšić, Head Of The Group For Wine Making at Ministry Of Agriculture, Forestry & Water Management

Serbian Wines Are Distinguished By Their Quality And Specific Characteristics

The Ministry has provided assistance in forming 12 representative associations

The Ministry and representative manufacturers ’ associations have also joined forces and recently put considerable effort into establishing a system of geographic origin aligned with EU requirements.

There have evidently been positive changes and improvements in the wine sector in Serbia, wines becoming better and better over the years. Making wine with the geographic origin is considered a top achievement. Why is that important? What makes them stand out?

– The production of wine with the geographic origin is truly a pinnacle in the wine industry. This is a difficult and demanding path but at the same time the only way for a group of manufacturers, a certain area, and even the entire country to gain recognition in the field of wine, gastronomy, tourism and culture.

Thanks to the Statistical Office of the Republic of Serbia and the Ministry of Agriculture, readers may learn all details and precise and unbiased information about vineyard areas, manufacturers, wines and other related matters

Wine is the first product in Serbia for which a system was introduced of labelling with the designation of origin, quality and logos indicating origin. Who rates wines and what does the rating procedure look like?

– In fact, this is not merely rating, but is rather a complex system of inspection, starting with winegrowing, the basis for this being the Wine Growers’ Register that functions according to EU rules. Only vineyards entered in this register may be included in the geographic designation of origin system, and this means that verification has been performed of the varieties, health, average yield, quality of grapes (particularly sugar content in must) … 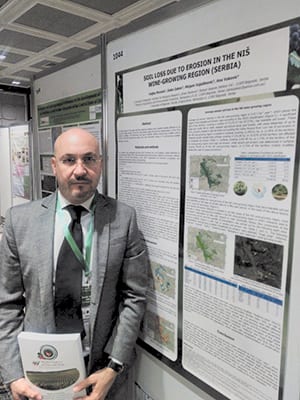 In addition, the orographic and other winegrowing and administrative information are determined, vineyards’ surface areas are measured using GPS devices with great precision and GIS technologies, as well as a spatial definition of the given vineyards, which all secure good control and reduction of the possibility of fraud in the yield and quality of grapes.

The inspection of the grape production itself, notably harvesting, as well as wine production, is performed by inspectors of the Ministry of Agriculture.

Following the completion of wine production, agriculture inspectors take samples of wines, code them, and send them to laboratories that are both accredited and authorised by the Ministry of Agriculture. The laboratories perform physical, chemical and, if necessary, microbiological analysis, while sensory testing is performed by authorised sensory testers.

Based on professional opinion and documents, the Ministry of Agriculture issues decisions in the form of certificates for given wines with designations of origin, specifically for a precisely determined quantity from a given vintage, based on which the manufacturers may collect a precisely determined number of quality and origin indication logos produced by the Institute for Manufacturing Banknotes and Coins. These logos are protected from counterfeiting in several ways, each logo having its own serial number, securing the principle of traceability.

The Statistical Office of the Republic of Serbia has published the Vineyard Atlas and Wine Atlas, including wineries in Serbia. You are one of the Chief Editors?

– The atlases you mention stem from many years of effort, in which my colleagues and I took part to finally provide the stakeholders with real and clear information about the Serbian winegrowing and winemaking sectors. Now, thanks to the Serbian Statistical Office and the Ministry of Agriculture, readers may learn all details and precise and unbiased information about vineyard areas, manufacturers, wines and other related matters.

Wine manufacturers have recognised the importance of clustering aimed at protecting their designation of origin, and to achieve other goals and make use of their possibilities

I think that the greatest value of the Vineyards Atlas and Wine Atlas lies in the fact that every manufacturer of wine is listed under their name registered in the Business Registers Agency, with names of wines that legally conform and are categorised in the official quality categorisation.

In addition, what makes these atlases unique is that they also provide information on the characteristics of terroir and vineyard areas, which is why the Vineyards Atlas received an award for the best professional monograph in 2015 from the International Organisation of Vine and Wine (OIV).

The Ministry provides a great many incentives for this industry. What are these measures exactly?

– Concerning incentives, there is a large number of support measures for this sector. Some of them include raising new production vineyards through repayment for purchase of nursery plants, placing supports, preparation and cultivating of the soil for planting and soil analysis, raising new vine stem plantations through encouraging the production of nursery plants, certification and clone selection of fruits, grape, and hops, or improving the production of grapevine nursery plants, support to investment in primary agricultural production, support for equipping wineries, improving the quality of wine through partial recovery of the costs of laboratory analysis of wine aimed at improving quality, support to the functioning of the designation of origin wine manufacturers’ associations.

One can often hear that there is a need to form associations. In the new system of protected designation of origin, do winemakers’ associations play a key role? How does this function and what is cooperation with associations like?

– Wine manufacturers have recognised the importance of clustering aimed at protecting their designation of origin, and to achieve other goals and make use of their possibilities. To date, the Ministry of Agriculture has provided assistance in forming 12 representative associations, whose targets conform to the EU’s targets for recognised manufacturers’ associations. All of this will have a positive impact on improving the quality of our wines and on the better promotion of our designation of origin logos.

According to available information, we have about 25,000 ha of vineyards. Is there a plan to increase this surface by the time of EU accession?

The Ministry of Agriculture will continue to take measures supporting the winegrowing and winemaking sectors and, starting this year, some new measures will be introduced, such as certification of nursery plants and clone selection of autochthonous and created domestic varieties of grapes amounting to 10 million dinars annually

The focus is on strengthening market solutions to meet the needs of raising vineyards. Since winegrowing and wine production is very expensive and has a long period of payback on an investment, the Ministry of Agriculture aims at stimulating manufacturers to raise new vineyards, notably with our autochthonous and created domestic varieties.

Interest in exporting wine to foreign markets is on the increase. What are the quantities in question? What is our advantage compared to wines from other countries?

– As Serbia is a much greater importer than an exporter of wine (in 2016 we exported approximately 10 million litres of wine while we imported 22 million litres), we must first tackle competition on the domestic market. In other words, we must all work together to promote domestic wines and strengthen the wine culture in the sense of a moral obligation for us to consume domestic wines in the first place, followed by imported wines.

Serbian wines are not competitive in terms of price compared to some imported wines, but what distinguishes them are special quality and specific characteristics, which are common to wines with designation of origin.

What are the Ministry’s plans for further development and improvement of wine growing in Serbia?

– The Ministry of Agriculture will continue to take measures supporting the winegrowing and winemaking sectors and, starting this year, some new measures will be introduced, such as certification of nursery plants and clone selection of autochthonous and created domestic varieties of grapes amounting to 10 million dinars annually.

In addition, the new Law on Wine and Other Grapes and Wine Products will help introduce certain novelties in the winegrowing and winemaking sectors, such as unconditional access of the wineries to the registry, assistance to grape and wine manufacturers concerning administrative procedures, support to the organisation of national contests for best Serbian wine, etc.