Norwegian Foreign Minister Børge Brende says that good relations with Serbia, which have been growing continuously since WWII, are today excellent, both at the state-to-state level as well as on the level of civil society. In this interview for CorD Magazine, minister Brende confirms that political contacts between the two countries are very good, close and frequent, while reforms of the business framework could lead to an increase in investments coming from Norway.

Responding to the often raised question in Serbia about its future relationship with NATO, which is currently headed by Norwegian Jens Stoltenberg, Brende emphasised that NATO remains the bedrock of Norway’s security, but agrees that it is up to Serbia to decide what kind of a relationship it needs with the Alliance.

How would you comment on the messages of the recently completed Summit of NATO, of which Norway is a member and which is headed by Mr Stoltenberg?

The Summit in Warsaw was, in my opinion, a success. It left the alliance stronger and more capable of taking on a changing and increasingly challenging security environment. NATO will be stronger in defence and deterrence and will do more to project stability beyond our borders. Furthermore, the Summit confirmed strong unity within the alliance and demonstrated Europe and North America’s firm political will to act collectively to secure all allies.

One of the more important issues of the summit was the stance regarding Russia. Are there any signs of a partnership insight, as was mentioned by the French President, or a continuation of the distance that occurred following the crisis in Ukraine; and what is Norway’s position in this regard?

We must meet the challenges posed by Russia with both deterrence and dialogue. Norway fully supports NATO’s reassurance and deterrence measures. We have already contributed substantially – with sea, air and land forces – and we will continue to do so. At the same time, we also believe that NATO must continue to engage Russia.

We must meet the challenges posed by Russia with both deterrence and dialogue. Norway fully supports NATO’s reassurance and deterrence measures. We have already contributed substantially – with sea, air and land forces – and we will continue to do so

Continued dialogue, predictability and transparency are in our own security interests. Dialogue is even more important in difficult times. However, a constructive and extensive partnership will only be possible if Russia complies with international law and international obligations and responsibilities.

How important is NATO membership for Norway and how do you view the enlargement policy, which is hoped for by most of the countries of the Western Balkans?

Sixty-seven years after it was established, NATO remains the bedrock of Norway’s security. 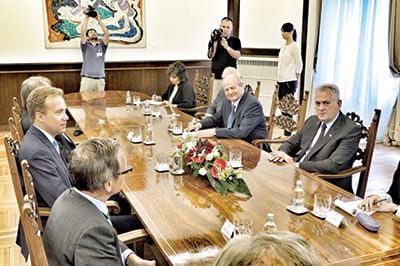 The solidarity of our allies is the foundation of our collective defence.

It is our key to peace and stability. Norway is fully committed to NATO’s open-door policy. Since we embarked on the last wave of enlargement decisions in 1997, it has brought increased stability and security to Europe. It remains a key element in ensuring peace for future generations in our region.

Serbia’s policy is one of military neutrality. How does such a determination seem to you?

It is for Serbia to decide what kind of relationship it wants with NATO. Serbia is a valued partner to NATO and our partnership has grown stronger in recent years. I believe that this partnership benefits both NATO and Serbia, as well as the whole region. I would like to see a further strengthening of NATO-Serbia relations, with political dialogue as well as practical cooperation.

How would you comment on the result of the referendum in the UK; could it have more serious implications for security in Europe?

I think our interests would have been better served with the UK inside the EU than outside. As an EU member, the UK has been an important partner for us in the internal market and a driving force in the EU’s international engagement, not the least in the Balkans. But, naturally, we should respect the decision of the British people and work to establish new ways of cooperating to meet common challenges.

Norway is fully committed to NATO’s open door policy. Since we embarked on the last wave of enlargement decisions in 1997, increased stability and security has been brought to Europe. It remains a key element in ensuring peace for future generations in our region.

Why has EU membership never been sufficiently attractive to Norwegians?

The Norwegian people have voted against joining the EU twice, in 1972 and 1994. Today opinion polls continue to show a majority are in favour of remaining outside of the EU. However, it should be noted that we are part of the internal market, through the European Economic Area agreement, that we are part of the Schengen cooperation and that we cooperate closely with the EU on foreign and security policy. Thus, Norwegian citizens greatly benefit from European integration, even though we are not members of the EU.

After a lull during the spring and winter, a possible new wave of refugees heading towards Europe has been announced. Does this worry you?

The understandings reached between the European Union and Turkey, as well as decisions taken in European states, has now significantly reduced migratory flows along the Balkan route. We expect and hope this will remain the case. The developments in 2016 created an unsustainable situation for all involved, including not least the asylum seekers themselves.

The Norwegian people have voted against joining the EU twice, in 1972 and in 1994. Today, opinion polls continue to show a majority are in favour of remaining outside of the EU. However, it should be noted that we are a part of the internal market through the European Economic Area agreement

How would you assess bilateral relations with Serbia?

Norwegian-Serbian relations are excellent. There is a long history behind this that goes back to the Second World War when thousands of Yugoslav prisoners-of-war spent time in German slave camps in Norway. 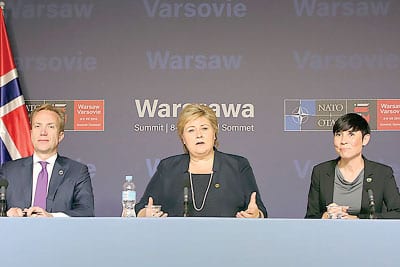 A unique bond developed between the prisoners-of-war and the Norwegians.

In the years following the war, relations between our two countries grew and this development has continued since the establishment of an independent Serbia.

Relations are excellent at the state-to-state level, but also when it comes to civil society, not least demonstrated through our people-to-people cooperation over the years.  Political contacts between our two countries are very good, close and frequent. I myself have visited Serbia twice in the last three years and Prime Minister Vučić visited Oslo in June 2015.  Furthermore, we do of course consult each other in international fora when the opportunities arise.

One Norwegian consulting company announced a few years ago that it sees Serbia as the best country for investment in the Western Balkans. How do you assess the future trends of Norwegian investments in Serbia?

I think there is untapped potential with regard to trade and investments between Norway and Serbia. Telenor is the largest Norwegian investor and its biggest investment in the region is in Serbia.  Reforms of the framework for investments can lead to an increase in investments.  Serbian exports are increasing and the most recent success story is a sharp increase in the export of honey. The free trade agreement from 2014 between Serbia and Norway was a very important step in making investments possible for Norwegian companies.

Serbia and Norway cooperate in the military sphere, and the ministry of defence announced this year that the strengthening of this cooperation is one of its priorities. How do you see this cooperation?

Norway and Serbia have cooperated closely over several years. In the UN mission to Chad (MINURCAT), our two countries were jointly responsible for the Military Hospital and the Norwegian, Serbian and UN flags flew together. Norway was instrumental in securing Serbia’s inclusion in NATO’s Partnership-for-Peace programme (PfP), and our cooperation is in constant development. We intend to continue our close cooperation in the future, but our focus will shift towards fewer and larger defence-related projects of a regional nature and with strong capacity building properties.

The Norwegian government is a donor and financier of the non-governmental sector, but also the Serbian judiciary, especially on matters related to strengthening the rule of law and the protection of human rights. Why was this selected as a priority?

Norway is assisting reforms in the Serbian judiciary, especially rule of law and human rights, both because it is a priority of the Serbian government and because it is in line with our priorities for development assistance in general. We are also pleased that the Serbian government at the highest level gives such emphasis to support civil society. Rule of law and human rights does not issue for the government only, but rather civil society has an important part to play as well.

Where do you see room for the promotion of bilateral cooperation between the two countries?

Our bilateral cooperation in the future is not limited to a few select areas and it is not exclusively the governments which should decide. Civil society will grow and things will naturally flourish because of the work of NGOs and individuals. Governments can help by creating the right conditions. Trade will also grow on the basis of the efforts of companies in both countries and, again, the governments must help by creating the best possible conditions.

Our political contacts will develop both as a result of bilateral efforts and as a result of developments in Europe. We have possibilities in both a bilateral context and a European context, such as the OSCE and the Council of Europe. We must use all arenas to further both political stability and economic development for our own good, and for the good of our neighbours. We also look forward to closer cooperation with Serbia in the context of the European Economic Area (EEA), if and when Serbia joins the European Union.