If Serbia wants to tackle the “environmental” Chapter 27 successfully, it has to develop its position and prepare for negotiations before they officially start. The process demands strong institutional capacities, careful funding, and responsibility toward citizens

Chapter 27 is one of the most demanding in the EU accession process, both in terms of the funds required, institutional capacities and the need for profound changes in the habits of people and industries. We spoke with Arūnas Kundrotas, Director of UAB Axante, a company specialised in environmental protection, to get his views on this critical juncture.

Mr. Kundrotas is also a former Environment Minister of the Republic of Lithuania, an adviser to the Chief Negotiator on the environmental chapter during the EULithuania negotiations, and an adviser of the Serbian Ministry of Agriculture and Environmental Protection (MAEP), and therefore has keen insights into the challenges that Lithuania faced during the process, about lessons learned by other EU candidates, and his work with the MAEP.

What was the Lithuanian experience in fulfilling the demands of Chapter 27 during your EU accession process?

– As you know, the environmental chapter is one of the most challenging chapters for negotiations. It is technically and financially rather complex, and it requires specialised knowledge and resources in the process of implementation. The most intense period for us started in 1997 with the development of the Approximation Strategy and our assumption that we would become members in 2005.

We were quite good at planning – Lithuania became an EU Member State in May 2004, while also being distinguished by having the shortest negotiations for environmental chapter ever. Less than one year passed from the time the negotiations position was submitted and the chapter was preliminarily closed.

Short negotiations do not mean easy negotiations. On the contrary, a very intense and well-organised preparatory process paved the path to success. We developed our positions and prepared for negotiations before the negotiations had even officially started.

What were the financial implications for Lithuania at a national level and at a household level? What sort of financial support was at your disposal?

– There is no doubt that it is an expensive chapter. We estimated public investment at about €1.2 billion, mainly to be used for the water and waste management sectors. In order not to impose too big of a burden on people, we established affordability limits: for water tariffs, a maximum of 4% of the average family income, and for waste management 1%. Similar limits were imposed in other countries.

When looking for grant support from the EU and other funds, you have to be clear about what you are ready to generate from the cost recovery mechanisms. When preparing our negotiation position, we established the following investment financing ratio: 50% EU and other grant funds, 20% national and local budgets and 30% loans (to be repaid through tariffs).

With this preliminary financing structure, you can realistically assess your finance potential – how much you can accumulate during one year and how many years you need to implement one or another EU directive fully.

Which part of the chapter proved to be the most difficult for implementation?

– There are two sides to this question. One is related to investment needs and the long implementation periods necessary for establishing the required public infrastructure. We managed to comply with the Landfills Directive during the period required by the directive itself by mid-2009. We, therefore, did not ask for a transitional period. 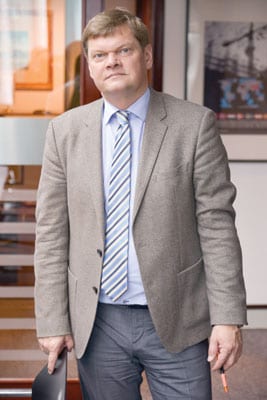 It was, however, rather demanding not only to build the landfills but also to change the structure of the municipal waste management sector and establish regional waste management systems. It is very similar to what is Serbia going through right now. We asked for a transitional period for the implementation of the Urban Waste Water Treatment directive. Originally we had asked for 2015, but during the negotiations, we were pushed up to 2010 and have managed to implement it with only a slight delay in 2011.

Another side is related to changing the behaviour of people and industries. In terms of people, the biggest need for behavioural change was in the waste management sector. Lithuania complies with the formal requirements, but even today the practice could be much better. For industries, it took some time to adapt the technologies and comply with EU requirements, and it was costly too. The changing of behaviours is a lengthy task, and it is probably impossible to fulfil without a strong enforcement system.

What was the most important benefit for the Lithuanian citizens that emerged from the Chapter 27 implementation process? Was it worth the effort?

– Chapter 27 brought cleaner air and water – that would be my immediate answer. The health benefits go beyond any question of that kind. In addition to this, you have the more “civilised” management of waste with reduced risks of groundwater contamination, saving resources and bringing other related benefits, safer chemical management, better preparedness for managing industrial accidents, the preservation of species and natural habitats. Among the other outcomes are the return of fish to our rivers and an increased recreational potential, better infrastructure in protected areas and affording more people access to nature. Lastly, but not least: a clear regulatory environment for business and investment.

Short negotiations do not mean easy negotiations. On the contrary, a very intense and well-organised preparatory process paved the path to success

You are currently working on two major environmental projects in Serbia. The first one aims to prepare the Serbian Ministry of Agriculture and Environmental Protection – MAEP’s EU Department for the upcoming EU accession negotiations, while the second one involves enabling the Project Management Department to plan and implement major environmental infrastructure projects in solid municipal waste, wastewater management and remediation across Serbia. Based on this experience, how would you assess Serbia’s readiness to open negotiations on Chapter 27?

– I would say we are right on track in preparations for the negotiations. The process of preparations for negotiations is well established, the institutional responsibilities are clear, the people understand the EU requirements, and a quite advanced level of reciprocity has been achieved.

We will see the proof of these efforts soon when the EU issues the Screening Report, and I hope that Serbia will be invited to start the negotiations process in Chapter 27. Still, there is a long way to go. A number of documents still have to be developed and positions clarified before the chapter can be ready for closing. This will take several years. A great deal will depend on the structuring of environmental financing, which is recognised as one of the main challenges in the Progress Report for 2015. Institutional reinforcement is needed in many sectors. This does not necessarily mean adding more people, and new or reformed institutions, though in some cases this will be needed as well. What would certainly be needed are training and improvement of skills.

A few weeks ago, I attended several events in the Ministry that were aimed at preparing the negotiations. The people in the Ministry made presentations and answered questions. I was really proud of them. It was such a change from the end of 2013 when we started out! I am sure we can have successful negotiations with such a team.

I would say we are right on track in preparations for the negotiations. The process of preparations for negotiations is well established, the institutional responsibilities are clear, the people understand the EU requirements, and a quite advanced level of reciprocity has been achieved

– This is not an easy topic for any country. We have our own painful experience in Lithuania. We started the process in 2000 with similar capacity levels, but soon it proved to be insufficient. You cannot engage in investment management, in particular with EU assistance, and have only a few people. It is a very demanding process. We were growing our capacity year by year until we had some 15 people in the Ministry who were mainly occupied with programming and about 100 people in the Agency for Implementation focusing only on environmental projects’ implementation. And this is when we decentralised procurement functions to the municipalities.

Serbia is not different: it will need to grow its capacities, in particular, for project implementation. But there are some positive steps. The establishment of the Green Fund provides a good opportunity. I believe this organisation can build the necessary capacity for managing investment projects and later grow to the Agency for Implementation of the EU funds. This road of growth from the fund to the implementing agency works and has been tested in several countries – Poland, Czech Republic, Estonia and others. It is my hope that the Ministry of Agriculture and Environmental Protection will be inspired by the lessons learned by others in this area.

Which sector do you expect to be the most demanding for Serbia?

– The hardest sector will definitely be water, and more precisely, wastewater treatment. This is the most expensive sector and will require most of the investment resources from public funds. The costs for the provision of drinking water will depend on decisions as to how to provide all inhabitants with good quality of drinking water. Still, the volume of these costs is not comparable to wastewater treatment needs. Waste management is another expensive sector. These two, water and waste, will be sharing much of PA and future funds during membership. Water management will probably receive about three-quarters of all the funds. But the cost is not the only issue. Institutional capacity at the local level might become a limiting factor if not properly addressed.

What would be your advice to the Serbian Government when it comes to negotiating EU Chapter 27?

Upon the completion of your ministerial career, you continued working on international environmental projects in the EU and non- EU states, such as Ukraine, Belarus, Moldova, Georgia, Armenia, and Azerbaijan. How do the experiences of these other countries compare to Serbia?

– Serbia’s commitment and potential are not comparable with these other countries you mentioned. It is very rewarding when you see your work is appreciated. People are committed and attentive to your advice. And things are really changing in the country. If I could choose, I would definitely choose Serbia to work on EU accession issues in the following years.

What should Serbian citizens ask for from their national and local government officials in this area?

– To ensure good quality and healthy environment in the shortest time possible, but with an affordable cost to the people. This requires good planning and responsible action from everyone involved.