We offer an opportunity to our members to increase their corporate visibility within the SSCC network and to maintain regular communication with other member-companies. We are also publishing interviews with representatives of our member-companies in order to promote the activities of Swiss companies in Serbia and highlight their good business practises

The aim of the Swiss-Serbian Chamber of Commerce (SSCC) is to unite companies wanting to foster economic relations between the two countries. Since its creation in 2014, the Swiss-Serbian Chamber of Commerce has brought together 66 member-companies. The SSCC member community includes companies of different sizes and from various economic sectors. In order to build stronger connections between our member-companies, and unite them even further, we started to organise member gatherings under the name: “SSCC Members’ Reunions”, says Ana Grujović, SSCC Executive director.

– The “SSCC Members’ Reunions” offer an opportunity to our members to increase their corporate visibility within the SSCC network and to maintain regular communication with other member-companies. So far, corporate presentations have been held by the following companies: SR Technics, Omya Venčac, Nestle Adriatic, Namics, and many others. Furthermore, our reunions are also a platform for the exchange of business experiences and ideas, as well as for networking. We are pleased to confirm that SSCC members are showing great interest in this type of event.

As one of the SSCC’s goals is to strive to contribute to the further strengthening of the Swiss-Serbian economic relations, could you please tell us more about the SSCC’s role in this matter?

– Economic relations between Switzerland and Serbia include regular government meetings in the form of Joint Economic Committees (JEC), which are held with the purpose of establishing priorities, discussing challenges and also developing new investment and trade opportunities. The last JEC was held on June 2017 in Belgrade, and it is my pleasure to inform you that the Swiss-Serbian Chamber of Commerce, for the first time since its creation in 2014, participated actively in this Committee.

On this occasion, SSCC President Yana Mikhailova provided insight into how Swiss companies operating in Serbia perceive the local economic environment and discussed key opportunities for the further development of long-term, sustainable business relations between Switzerland and Serbia.

– Yes, I’m honoured to say that the signing ceremony of the Service Performance Agreement between Switzerland Global Enterprise (S-GE) and the Swiss-Serbian Chamber of Commerce took place on 19th June 2017 in Belgrade. 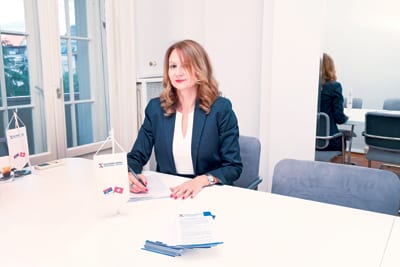 S-GE has been informing, advising and guiding SMEs from Switzerland and Liechtenstein in their international business ventures since 1927. It has also been responsible for promoting Switzerland as a business location abroad, since 1st January 2008.

The signing of this agreement clearly shows that S-GE has recognised the SSCC as a reliable partner in Serbia that is able to provide up-to-date market-information on a range of sectors and themes of importance for Swiss companies interested in developing their business operations on the local market.

– Switzerland is well-known for its traditional values of democracy, punctuality, efficiency, first-class service and precision. The SSCC is committed to the promotion of Swiss values, know-how and knowledge. With this in mind, we initiated a new marketing project entitled “SSCC Success Stories”; we are publishing interviews with our member companies in order to promote the activities of Swiss companies in Serbia and highlight their good business practises. So far, we have published interviews with seven member-companies, including Standard Furniture Serbia, Namics, SR Technics, InterVenture, Nestle Adriatic, Aquawell and Novartis.

Our reunions are also a platform for the exchange of business experiences and ideas, as well as for networking. We are pleased to confirm that SSCC members are showing great interest in this type of event

What kind of activities is the SSCC planning for the second half of 2017?

– As every year, the SSCC is planning to organise its flagship event in the second half of 2017: The SSCC Annual Conference, with the aim of facilitating a public-private dialogue and providing an opportunity for direct talks between public officials and businesses. The last conference, which was held on October 2016, focused on SMEs as a growth driver of Swiss-Serbian economic relations and resulted in a document ‚ “SSCC Recommendations”, which comprises a collection of conclusions drawn during the debates of the conference.

The “Recommendations” were submitted to the Government of Serbia as a response to pressing issues faced by SMEs relating to bureaucracy, access to finance, labour productivity and law enforcement. In this way, the SSCC strives to contribute to creating a better economic environment for the SME sector in Serbia, as well as to the further strengthening of business ties between Swiss and Serbian companies.

Which sectors have the greatest potential for future economic cooperation between Switzerland and Serbia?

– Serbia has great potential in many sectors, such as ICT services, the wood processing industry and the food industry, amongst other sectors. In March 2017 the SSCC organised a visit to the “Science Technology Park in Zvezdara”, which is home to a great number of companies, including two Swiss ICT companies.

SSCC member-company InterVenture, based at STP Zvezdara, is a Swiss IT near-shoring company, established in Zurich in 2010, which specialises in the establishment of client-own and specific software development teams in Serbia.

Their success story clearly confirms the potential of the Serbian ICT sector and its importance for the further development of Swiss-Serbian economic cooperation.