E-Government And The French Training Model For Better Administration

Minister Ana Brnabić’s list of priorities includes amendments to the Law on Local Self-Government, finding the right solution for allocating competences between the state and local authorities and boosting inter-municipal cooperation.

After 10 years in NALED, could you tell us how working for the Alliance has changed you personally?

The huge energy of the entire organiza­tion and its positive approach to changes during those ten years, along with NALED’s very visible contribution to reforms in Serbia have instilled a lot of self-confidence in me. This has helped me in accepting this serious and responsible position as Minister for State Administration and Local Self-Government at a very sensitive time. Allow me to give you a more concrete answer to your question. Because of my experience, I can say that I am ready to make Serbia a better place for living and doing business through my work in the government.

What sets NALED apart from other organizations?

People in NALED are highly professional and have a lot of energy to change things for the better and move forward, which is why they have managed to do many good things and accomplished a lot. I am glad to see that this effort has been recognized. There are two things that set NALED apart in my opinion: instigating a dialogue among businesses, state, local governments and civil society, and providing constructive criticism.

The E-Government Alliance was formed and a strategic framework for the advance­ment of e-services in Serbia was devised in cooperation with foreign experts while you were at NALED’s helm. In the government, you are now directly in charge of developing e-government. What will be the greatest challenges in this task? 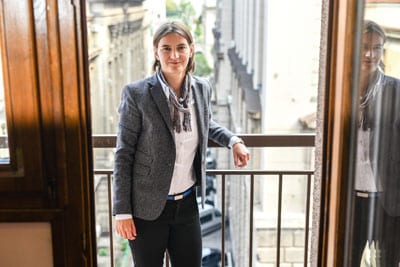 In short, the greatest challenges will lie in simplifying complicated procedures, combat­ing the shadow economy, modernizing the administration to be at the full service of citizens and businesses, and definitively establishing the Public Administration Academy.

We are going to fight these challenges by affirm­ing the good governance concept, which implies reaching a high level of efficiency of the existing procedures and optimizing the administration’s work while being mindful of the rights of our citizens who will use these services. By doing so we will reduce costs and save time for both citizens and business people while the state will substantially curb opportunities for corruption.

Do you think that the plan mentioned by the Prime Minister, for all relevant institutions to be fully networked in one year and exchange data in real-time, will be implemented? Do you already know which administrative procedures will be the first to transit from the old-fashioned counter to electronic form?

Six state institutions, which dispose of 80% of the data contained in official records, have launched a tender to procure electronic data interchange software.
We are talking about information that is exchanged between the Central Registry of Mandatory Social Insurance, the Pension and Disability Insurance Fund, the Tax Administration, the Interior Ministry, the National Employment Office and the Ministry of State Administration and Local Self-Government. Implementing this system will reduce the amount of paper used by five million sheets a year.

In the last ten years NALED has been trying to build a position as a constructive partner to the government and I expect this to continue. As long as the criticism is constructive, I will continue to accept it, and to perceive NALED as a partner to the Serbian government

I expect the system to be in use in six to eight months. In the following two years, you can also expect to see the implementation of e-signature and e-payment, the launch of a web portal that will make the inspection services more efficient, connecting all the inspection services into a single system, and work­ on increasing security in doing business. Already, our citizens don’t have to acquire a number of documents by themselves, including birth certificates, citizenship certificates, and certificates of residence, as this is now done by state bodies on their behalf.

Electronic building permits became fully operational in less than six months. What does that tell us about the potential of e-government, considering that implement­ing the e-permit system did not cost much, and yet it has reduced opportunities for corruption and, equally important, has revolutionized administrative work? 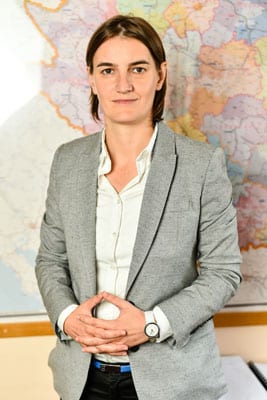 The implementation of the e-building permit system has created a foundation for the further development of e-government. This is a good example that demonstrates how it is possible to simplify and modernize procedures used by citizens and businesses with a relatively small amount of money and in a short period of time.

With the help of appropriate training, local clerks are very quick to adapt to this new, more efficient way of working, and this is at the core of the public admin­istration reform – namely, changing civil servants’ attitude and approach to citizens and businesses, or rather turning the state into a real service provider. Training civil servants is crucial for modernizing the administra­tion, and this is something we are going to work on a lot because we need to be the instigators of change.

When can we expect the Public Administration Academy to be established, and do you know what the Academy will look like and what kind of training it will provide?

The Academy that will educate civil servants is a brand new development in the Serbian public administration, geared towards obtaining new know-how and encourag­ing civil servants to progress in their careers. Our Acade­my will use France’s experience, and our French colleagues have offered to help us at all stages of the project.

After finding an interim solution for amendments to the Law on Local Government Finance, you now have to devise a format that will be sustainable in the long run. What is the best funding format for Serbia? Are there any examples from Europe or the rest of the world that we can copy?

It is crucial that we find a sustainable and transparent way to finance local government, and the reform will not stop at the new amendments to the Law on Local Government Finance. The reforms must keep up with the Ministry of Finance’s initiatives for eliminating problems with parafiscal charges through the Law on Administrative Fees and Charges.

One of the coming priorities will be the full implementation of the Law on Administrative Procedure that will make the everyday lives of people in Serbia much easier. The Law brings more obligations for civil servants and expanded rights for citizens in terms of processing their requests

We will be a good partner in this endeavour. My goal is to create a functional model that will support the effort of local governments to launch development projects and encourage them not to spend most of their budgets on current expenditure.

Networking between inspection services, data exchange and risk analysis are expected to be the crowning achievements of the Law on Inspection Supervision. When is the e-inspector system going to be fully imple­mented, and what can we expect from it?

Capacity is always a problem. Increasing the number of inspectors is both necessary and financially sustain­able because they will reduce the shadow economy and boost budget revenue. In addition to this, we need to provide proper equipment for them and complete the centralized information system called ‘e-inspector’ through which inspectors will be able to exchange company data that will later serve as the basis for risk analysis and risk categorization. We have already started training inspectors who have begun supervising unregistered business entities for the first time ever, which in turn diminishes the shadow economy and increases the number of newly registered companies and new jobs.

From your position as minister, you probably have a better insight into NALED’s potential and future. How do you see NALED in the future?

I expect NALED to continue to critically and con­structively consider all issues that are impor­tant for improving the general, economic and legis­lative environment in Serbia, and to remain independent while being a strong partner to the government in creating change.

I believe that the experience that the Alliance has today will help it foster the critical spirit that is its vital essence and that at the same time it will be constructive in its actions. This is the paradigm that NALED functions on, and for me personally this is an action format that I support.