Despite the pandemic, labour shortages, lack of...
Read more

Serbia – Land Of Creativity And Innovation

The creative industries are among the world’s fastest-growing economic sectors. They also have the potential to completely change how a country is perceived by international counterparts. In order to support the development of the sector, and take advantage of the creativity and innovation in the country, Serbian Prime Minister Ana Brnabić founded the Creative Industries Council.

Speaking to CorD about how this exciting sector is being supported by the government is Ana Ilić, Advisor to the Serbian Prime Minister for the digital and creative industries, film and tourism.

The Council for Creative Industries is an initiative of the RS Prime Minister Ana Brnabić who has made the development of creative industries and the knowledge-based economy one of her key priorities. The role of the Creative Council is to advise the Prime Minister and help her team to make informed decisions that guide the development of the sector in the most efficient ways. Not only does the council want to ensure that artists and creators can become sustainable and reach as extensive an audience as possible both domestically and internationally, but we also want to ensure that Serbia is recognized for its immense creative potential, innovative ideas, and originality.

We started almost a year ago, and as of six months ago, we’ve worked with the officially formed Creative Industries Council. We quickly compiled a list of over 20 initiatives that offer systemic solutions to problems faced and associated topics, then divided ourselves into smaller groups in order to be more efficient and constructive. On many issues, we’ve also consulted with experts who are not members of the Council. We have determined the initiatives that are a priority and are now working on their implementation. All members of the Council work on a voluntary basis and really invest a lot of time and energy in all these activities,” says Ilić.

In which areas do you think Serbia could position itself at the creative leader of Europe?

In many ways, the benefit of the creative industries is that it isn’t really about competition in the traditional sense. It’s not like there’s a limit to creativity. I always refer to JK Rowling and Harry Potter, and how the imagination of just one woman has been converted into a multi-billion euro endeavour – and this has been achieved without diminishing any of her “competitors”. What’s more, creativity can’t really be outsourced or duplicated, and it’s not something that usually is limited by the comparative cheapness of the labour force. So building creative industry capacity has obvious benefits for our country.

Having said that, all areas of the creative industries in our country have tremendous potential. There are many successful individuals and organisations already in existence that achieve great results even beyond the borders of our country. What’s been missing is a platform for us to achieve even greater visibility. In the field of the visual arts, we have great painters and sculptors who exhibit around the world – Ivan Grubanov, Tijana Kojić, Ivana Bašić, Ɖorđe Ozbolt and Gala Čaki, to mention just a few. In the domain of software design and gaming, we have real giants like Nordeus and Eipix. Apart from that, in Serbia, we are developing the technologies of the future that we don’t even have an adequate name for yet – for example, technology for the digital transformation of people, which is the work of Serbian company 3Lateral.

‘VR all Art’ is a platform that offers virtual reality exhibitions of artworks even for our National Museum, which was developed by Vitomir Jevremović. Many of our musicians already have very successful international careers, like LP Duo, Sixth June, Ana Popović, Nemanja Radulović, Isidora Žebeljan, Stefan Milenković, Gramophondzie et al. I don’t think those of us in the country are even aware of the significance and value to our society of the talent and achievements of these people. And what’s more, they did it all without the systemic support of the state. Our view is that the state should recognise this work, these results and potential, and ask all these people how we can help and work with them to improve their ability to scale up and reach bigger audiences and increase capacity. That’s what we’re doing.

I don’t think those of us in the country are even aware of the significance and value to our society of the talent and achievements of these people who did it all without the systemic support of the state.

In which way will the creative industries or individual actors be supported by the state, given that such support is crucial to young people?

The first step, which is also the most important, has already been taken, and that is that the state has finally recognised the Creative Industries as an industrial sector of its own, including recognition of its potential to contribute to both the country’s social and its economic growth. According to their very nature, the creative industries are cross-sectoral, encompassing multiple areas of government administration, from the economy to culture, to trade to tourism. That’s why it’s very good that the initiative for supporting the creative industries comes right from the centre of government, from the Prime Minister. It is really ideal to coordinate everything from there.

So as well as traditional support to culture and art, the state has now initiated systemic support for those areas that are based on the creative economy, on cultural and creative outputs that stimulate economic growth. The state will now support this sector through multiple systematic measures, including legal and regulatory reforms, but also via numerous new activities and projects that should ensure the improved functioning of the sector, as well as the promotion of the sector and the country in global markets.

Ideas are classed among the most valuable resources, but their realisation is also dependent on economic factors. If we take young artists for starters, how have you conceived their promotion, or perhaps additional education?

Firstly through support for participation in major events, such as festivals and fairs, both in the country and elsewhere in the world, providing opportunities for young people to exhibit their works, build international partnerships and networks, and reach a much wider audience. Likewise, through a comprehensive marketing campaign of our own, we will promote our most successful individuals and initiatives around the world through all channels and platforms at our disposal. We also want foreign artists and creative individuals to come and work in our country. Serbia deserves to be a hub of creativity and innovation, and I believe it will soon become that through the smart and tangible steps that we are going to take. The end goal is for artists and creative individuals to be able to live well from their work right here in Serbia; for them to stay and work in the country and to still reach their audiences and markets both here and worldwide. 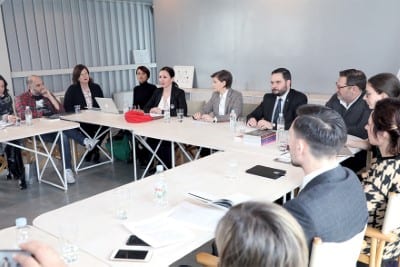 It’s very good that the initiative for supporting the creative industries progresses from the centre of government, from the Prime Minister. As it encompasses many sectors, It is best to be coordinated from there

Do you already have some planned projects?

We have many projects that we’re working on. Even before the formal establishment of the Council, most of the Council members participated in the organisation of Creative Serbia: the future is a creative conference held in Belgrade earlier this year as a way to familiarise the public with the concept of Serbian creativity and innovation. The Council also participated actively in devising the re-launch of the National Museum and developing its new visual identity. We’ve additionally supported many important cultural and artistic events: the October Salon, Bitef, Bemus, the Belgrade Jazz Festival, the General Assembly of the European Association of Composers, while for the first time ever we’re bringing to Belgrade and Serbia the international conference DLD – Digital Life Design, amongst other things.

Beyond this, there is an entire array of reforms that we’re working on with ministerial staff that will improve the conditions for creative industry participants and stakeholders. These range from incentives for opening and operating art galleries, to ensuring the more secure and long-term funding of the most important events and festivals, to the creation of creative hubs and resolving the status and retirement of professional dancers. In the coming weeks, there will be plenty more events, discussions and panels initiated by the Council.

We’ve also devised the communication platform of Serbia Creates, which is slowly getting started and offers a new approach to positioning Serbia by affirming the country’s contemporary characteristics of creativity, innovation, and originality. Serbia Creates frames authenticity, ingenuity, excellence, trust, and openness as core elements of the Serbian character and promotes Serbian people as creative, innovative, reliable and resilient partners. It ultimately profiles Serbia as a great place to visit, invest, study or do business. Strengthening the creative sector is important for Serbia to start thinking differently about itself, and this is also the first step in changing our image in the outside world.