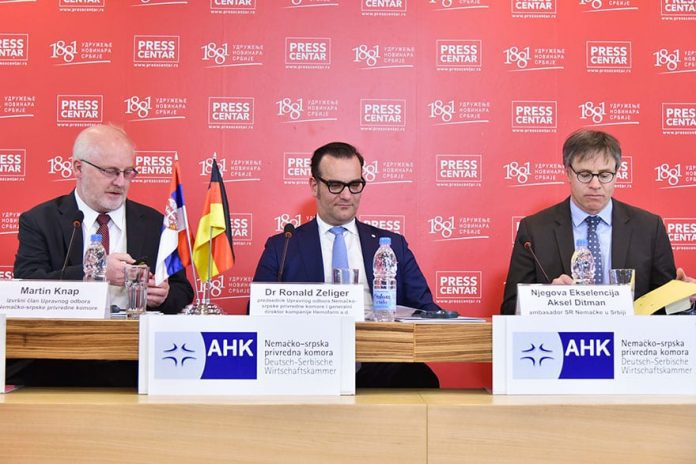 The results of the 2017 AHK survey show that the assessment of the economic situation in Serbia in 2017 is slightly improved compared to the previous year.

However, nine per cent of respondents does not see an improvement and believe that the economic situation in Serbia could worsen compared to 2016.

Forecasts for the current business year are also slightly more optimistic than in 2016, such that 62 per cent of respondents expect an improvement, 30 per cent expect the business situation to remain unchanged and eight per cent fear its deterioration.

When it comes to the development of operations and additional hiring in 2017, 39 per cent of surveyed companies do not plan to increase their staff, 48 per cent believe that they will take on new personnel, while 13 per cent announced possible downsizing.

On the issue of new investments during 2017, 48 per cent of those surveyed plan to increase investments, while 11 per cent announced reductions in their investments.

When it comes to evaluating factors that influence business operations in Serbia, the worst assessments went to the fight against corruption and crime, legal security, the tax system and tax administration, transparency of public tenders and the efficiency of public administration.

German-Serbian companies gave a satisfactory assessment to criteria relating to the labour market in Serbia: companies are satisfied with the levels of productivity and motivation of their employees, their qualifications, academic education and labour costs.

“The feedback from companies is positive. The economic situation in Serbia improved continuously during 2015 and 2016, and such a tendency is also continuing this year.” – German Ambassador to Serbia, H.E. Axel Dittmann

However, this year saw a new factor appear as an important one: the quality and availability of local suppliers. Recognition of this factor is linked with the successful supply initiatives conducted by the German-Serbian Chamber of Commerce.

Within the framework of the general survey of German companies, which was conducted in 16 countries of Central and Eastern Europe, participants also evaluated other countries. Thus, in the category of desirable economic locations, Serbia ranked 11th among 19 countries, as was also the case last year. Companies that already operate in Serbia have a better opinion of Serbia than companies that have never done business in our country.

And although the joint assessment is that Serbia is still a very desirable destination for investment, competition in Eastern and Central Europe is very strong, such that Serbia must work actively and with dedication on improving the general conditions for doing business.

German Ambassador to Serbia, H.E. Axel Dittmann, expressed his satisfaction with the good results of this year’s survey. “The feedback from companies is positive. The economic situation in Serbia improved continuously during 2015 and 2016, and such a tendency is also continuing this year,” said Ambassador Dittmann, adding that “this is a result of significant reforms that the Serbian government has initiated and with which it has embarked on a journey to greater economic efficiency and the creation of an even better environment for investment in the economy. However, this does not mean that there isn’t more to be done. The feedback from companies also highlights the possibility of further improving the business climate in Serbia: businesspeople are primarily hoping for decisive reform steps in the rule of law”.

Summing up the results of the survey, Dr Ronald Seeliger, president of the German-Serbian Chamber of Commerce, concluded that this year’s survey of German investors in Serbia shows a good trend that is provided by the initiated reform process, especially since 2013. Also testifying to the positive direction is the fact that in this year’s survey the vast majority of respondents, as many as 84 per cent, said they would re-invest in Serbia.

The results also showed, however, that there are many complaints – such as relating to the unpredictability of operations – that are reiterated from year to year. This means that there is plenty of work ahead for the future government, but also that it is clear what its priorities must be.

The German-Serbian Chamber of Commerce will continue, as it has to date, to try to provide maximum support in the creation of an even better economic environment and the improvement of the overall economic situation, said Seeliger.