A delegation of the US Congress arrived on an unannounced visit to Taiwan, less than two weeks after the...
Read more
29 January 2016
Facebook
Twitter
Email

A Memorandum of Understanding – MoU on postal and distribution services partnership was signed in late January between company Toshiba and Posta Serbia.

The signing ceremony was held at the Belgrade Regional Postal and Logistics Centre in Zemun, where Toshiba installed the first automated mail sorting system.

The ceremony was attended by H.E. Juichi Takahara, Japanese Ambassador to Serbia, Milan Krkobabić, Director of Posta Serbia, and Sadao Sekine, Vice President of Toshiba Corporation and Director of the department for security systems and automation systems for the company’s social infrastructure. 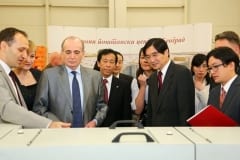