Prime Minister Ana Brnabić visited today the company Philip Morris in Niš, which in September 2003 privatised the largest Serbian tobacco factory DIN, and to this day remained the largest American, and among the ten largest foreign investments in Serbia.

Brnabić reminded that this company employs 900 workers directly and 3,000 indirectly and that it not only brings money to Serbia but also the knowledge, technology and work system that remains in our country and flows into other branches of the economy. 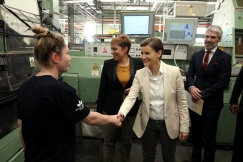 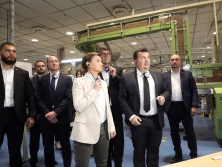 This company is one of the most desirable employers in Serbia and an excellent partner of the government of Serbia and the City of Niš, emphasised the Prime Minister, adding that Serbia will do everything that Philip Morris will continue to do business in our country.

She particularly pointed out that the company is located in Niš and that this is an important part of the decentralization plan and the balanced regional development of Serbia, by which the government is trying to reduce the migration to Belgrade and Novi Sad.

The previous government launched the initiative to get Niš on its feet as a regional centre of southern Serbia and I think that we have succeeded in that by bringing new investors and creating new jobs. By the end of the year, the construction of a science and technology centre will begin. This will all contribute to the return of the epithet of the centre of the electronic industry to Niš, said Brnabić.

She also stated that in Niš, in the first phase, 2,400 apartments are built for security personnel.

According to Brnabić, we are also investing in Kraljevo, Loznica, Prokuplje and other cities throughout Serbia.