According to the latest estimates of the Geological Survey of Serbia (GZS), which were made in 2000, Serbia has...
Read more
6 June 2019
Facebook
Twitter
Email

The Serbian Government Office for IT and eGovernance in cooperation with NALED and with the support of the companies Mastercard and Visa, launched today a national campaign and competition of cities and municipalities “Non-Cash Payment Champions”.

The campaign aims to raise the awareness of citizens on the advantages of developing a non-cash company and is one of the measures of the National Program for the Suppression of the Negative Economy 2019-2020.

The competition will be open to all cities and municipalities that have enabled payment of fees and charges by payment cards at counters, and those cities and municipalities that motivate their citizens to opt for the use of this non-cash payment in the period from 1 July to 31 December This year and the highest number of payments on POS terminals in relation to the number of inhabitants will earn valuable prizes. 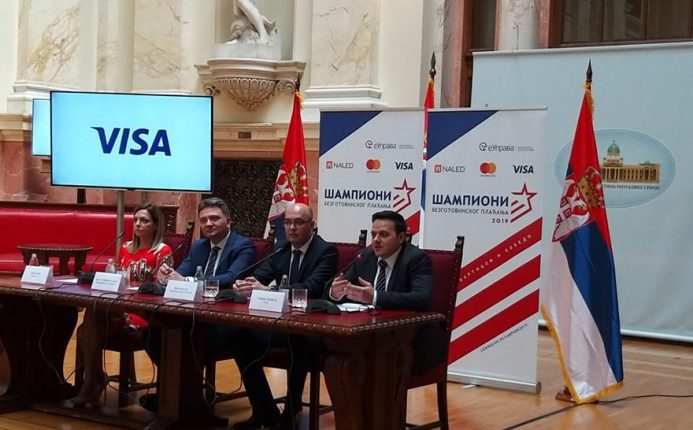 -The establishment of the IT and e-Government Office for the first time enabled electronic payment of administrative taxes on the eGovernment portal and provided the necessary infrastructure for setting up POS terminals to all counters of municipal and city administrations, police administrations and cadastre counters throughout Serbia. To date, 250 POS terminals have been set up, in 60 cities and municipalities in Serbia, at counters of various public administration institutions, through which more than 51 thousand transactions were carried out. This means that citizens did not have to go to bank counters or post offices for the same number of times to pay administrative taxes, but in one place, they completed a complete job with only one arrival. The introduction of POS terminals for municipalities and cities is free, it is one of the essential measures of the National Plan for the Suppression of the Negative Economy 2019 – 2020, and once again we call for all local governments to participate in this action, together to build an efficient, transparent public administration in the service of citizens – said doc. Dr Mihailo Jovanović, Director of IT and eGovernment Office.

The first local self-government will be rewarded with a children’s playground worth 20,000 euros, while the top five will receive an internet presentation “Serving citizens, in accordance with the standards of the web site of the Government of Serbia, and the first 10 cities and municipalities plaque” Non-Cash Payment Championships to be presented at the final conference in Belgrade.

All local self-governments interested in participating in the competition may, by 17 June, conclude an Agreement with the IT and e-Government Office for the Terminal. Surely, other municipalities interested in providing this type of simple payment of administrative fees can sign the agreements even after this deadline, but these municipalities will not be included in the prize game.

– Non-cash transactions for citizens and businesses mean lower payment costs, greater efficiency and security. The state gets more transparent financial flows, the opportunity for better tax collection and faster economic development, as well as lower costs, as the production and storage of cash are expensive. We hope that POS terminals will soon be seen at other counters that citizens often visit, primarily for obtaining personal documents and that the state will continue to work to reduce the allowed limit for cash payments, said IO NALED member and Mayor of Pozarevac Bane Spasović adding that the campaign is also following the initiative for the introduction of POS terminal at institutions counters.

At the meeting, it was emphasised that education and promotion of the advantages of new technologies and benefits for the company from less cash use were crucial for the development of a non-cash company. It is also necessary to work on financial inclusion, since, in addition to persons who do not have enough information on the reliability of the use of cards, they are not usually used by persons who do not have an account in the bank.

– Through partnerships with the public sector on the Serbian market, we have realised several successful activities such as a national prize game with fiscal accounts and card slips with NALED, as well as contactless payment in public transport. We are very proud to continue partnerships in order to provide Serbian citizens with access to new technologies together, and at the same time satisfy the needs of the users, as according to data from Mastercard Masterindeks research from 2018, even 24% of active card users want to pay in public institutions with cards – said Jelena Ristić, Mastercard director for Serbia, Montenegro and Bosnia and Herzegovina at Mastercard.

In addition to free installation and training for the use of POS terminals, local self-government will provide for themselves, the citizens and the economy the lowest commission for payments at the counters – 45 dinars for amounts less than RSD 4.500 or 1% for higher payments, as well as free branding of the sale counter and participation in campaign and promotion.

– We are pleased that this initiative is supported at the Government level and because we share a common vision about the importance of further development of non-cash payments in Serbia. By participating in the campaign, we are helping to increase the number of people in Serbia using more convenient and safe ways of payment in everyday life – said Vladimir Đorđević, general manager of Visa for Southeast Europe.

Digital Trust Is The Challenge Of The Decade